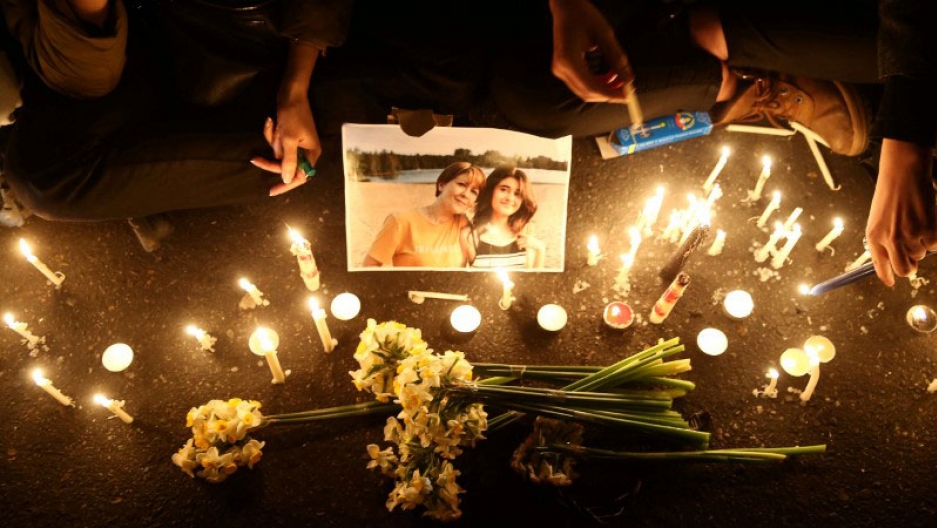 Family members and others gather on Jan. 11, 2020 to remember the 176 people who died when the Ukraine International Airlines flight PS752 crashed in Iran earlier this month.

Protesters denouncing Iran's clerical rulers took to the streets and riot police deployed to face them on Monday, in a third day of demonstrations after authorities acknowledged mistakenly shooting down a passenger plane.

Iran's president called last week's downing of the Ukrainian plane a "disastrous mistake" on Saturday, saying its air defenses were fired in error while on alert after it carried out missile strikes on US targets in Iraq.

Iranian public anger, rumbling for days after Tehran had repeatedly denied it was to blame for the plane crash, erupted into protests when the military admitted its role.

A full picture of protests inside Iran is difficult to obtain because of restrictions on independent media. But videos uploaded to the internet showed scores, possibly hundreds, of protesters on Monday at sites in Tehran and Isfahan, a major city south of the capital.

Video showed students chanting slogans including "Clerics get lost!" outside universities in Isfahan and in Tehran, with riot police taking positions on the streets. Reports say demonstrators also shouted "death to the dictator" — a reference to Iran's supreme leader, Ayatollah Ali Khamenei.

Images from the previous two days of protests showed wounded people being carried and pools of blood on the ground. Gunshots could be heard, although the police have denied opening fire.

Hamid is an Iranian who reached out to the BBC after the news organization asked ordinary Iranians to share their views. He did not give his last name. He said sees these protests as playing a bigger role in his country's future and that the regime can't block the unrest for long.

"Now [the] situation is completely different from last week. [The] Islamic Republic wanted a 'severe revenge,' but they made an ugly disaster and shot down a commercial flight. It shows their incompetence," Hamid said. "Protests will continue, and based on historic incidents which led to [the] 1979 revolution, this current situation would play a butterfly effect role in future. The regime now can’t just block the unrest. It started in June 2009, and it will continue to something. But I think there would be more blood to the end of the regime."

An Iranian protester, who asked that her name not be used to protect her identity, said it's not the first time the regime has lied to its people.

"It's not just about today that the regime is lying; it's about 43 years that they are lying to us and people are still suspicious about if still they are telling the truth," she said. "They start to beat us. And when we start to have slogans, they start to bombard us on fire. A woman got shot on her leg in front of me. She was, I think, about 40, 42 years old. Everybody who are out, we had deep condolences and deep sorrows for the people of Iran that we have truly lost them in the Ukrainian airplane crash. This is what we cannot tolerate anymore, that they are shooting us, they are killing us, and you're still denying this part."

But that view is not universal. Some Iranians — like Zeinab Ghasemi Tari, a professor at the University of Tehran sympathetic to Iran's government — said they do not like protesters politicizing the plane crash. The professor spoke with The World's Carol Hills.

"I think it was a very big tragedy for the families and also for many Iranians," Ghasemi Tari said. "I mean, they were ordinary human beings, their lives matter a lot. I mean, every human being or individual's life is worthy."

Carol Hills: What was your own reaction when you heard that the plane had been shot down?

Zeinab Ghasemi Tari: Actually, in the beginning, the timing was very curious. So, you know, it took them three days to announce that they have shot this down by mistake. So, it's not a very long time. I think the mistake was —

It was three days of denying it. And there were other other intelligence and other countries saying that it was pretty clear that it had come from Iran. So, three days is a long time.

So, they had actually told the public that we are making, we are actually having or conducting investigations and we cannot actually — this total denial of what happened, you know, was actually what many people find, you know, something to be angry at.

Related: Analysis: Iran-US relationship still precarious with no clear US strategy in sight

And what are your feelings about that total denial for three days?

I, like many other people, think it was a very bad mistake. And I feel that this is something that they have to respond to. That and why it actually took them three days — not three days — why actually they denied this totally from the beginning.

What's your opinion of the protests that began Saturday in response to the Iranian government's admission that the plane was shot down?

You know, it's a bit difficult. Like, you know, it is a human a humanitarian issue in a sense. It actually deals with people's feelings and sentiments. And then making it politicized in a movement makes it a bit complicated to make comments on. I understand that people are angry. However, what I would actually do at this time is instead of going to streets, asking the government legally to respond, you know, or to take action against those who actually conducted mismanagement of this crisis, instead of going to the streets to bring down, you know —

Well, in that clip we heard at the top of this interview, a person said that a woman had been shot in the leg at a protest.

What I would actually say, is that I think there should be a space and time given for people to express their grief and their sentiments. However, it should not take a sort of violent direction.