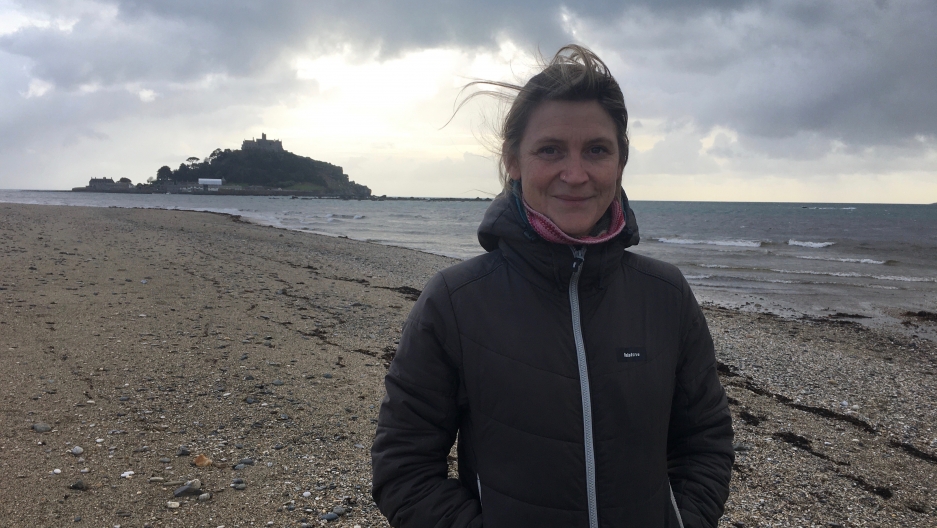 Rachel Yates left her career in journalism to work for the Plastic Free Communities program to try to preserve the ocean, to which she feels a deep connection.

The quiet path runs through a small forest of lush bamboo. Birds chirp overhead. It’s easy to forget that this little garden is right in the middle of Canary Wharf, one of the main financial districts in central London.

Last year, Canary Wharf was labeled the first plastic-free commercial district in the world, an accreditation awarded as part of the Plastic Free Communities program, which was developed by a group of surfers in rural Cornwall. But this shopping center and other communities with this designation actually aren’t quite plastic-free — yet.

Martin Gettings, the head of sustainability at Canary Wharf Group, calls the area “a little green oasis in the heart of a busy city.” It’s one of many eco-friendly measures going on in this multibillion-dollar commercial estate — though, if you don’t know where to look, you could miss them.

In the mall, for example, there are seven water bottle refill stations as well as a machine where you can return bottles and cans for a voucher, which Gettings says is the first of its kind in the UK. For the past few years, Gettings has been crafting initiatives to cut down on plastic waste in Canary Wharf. 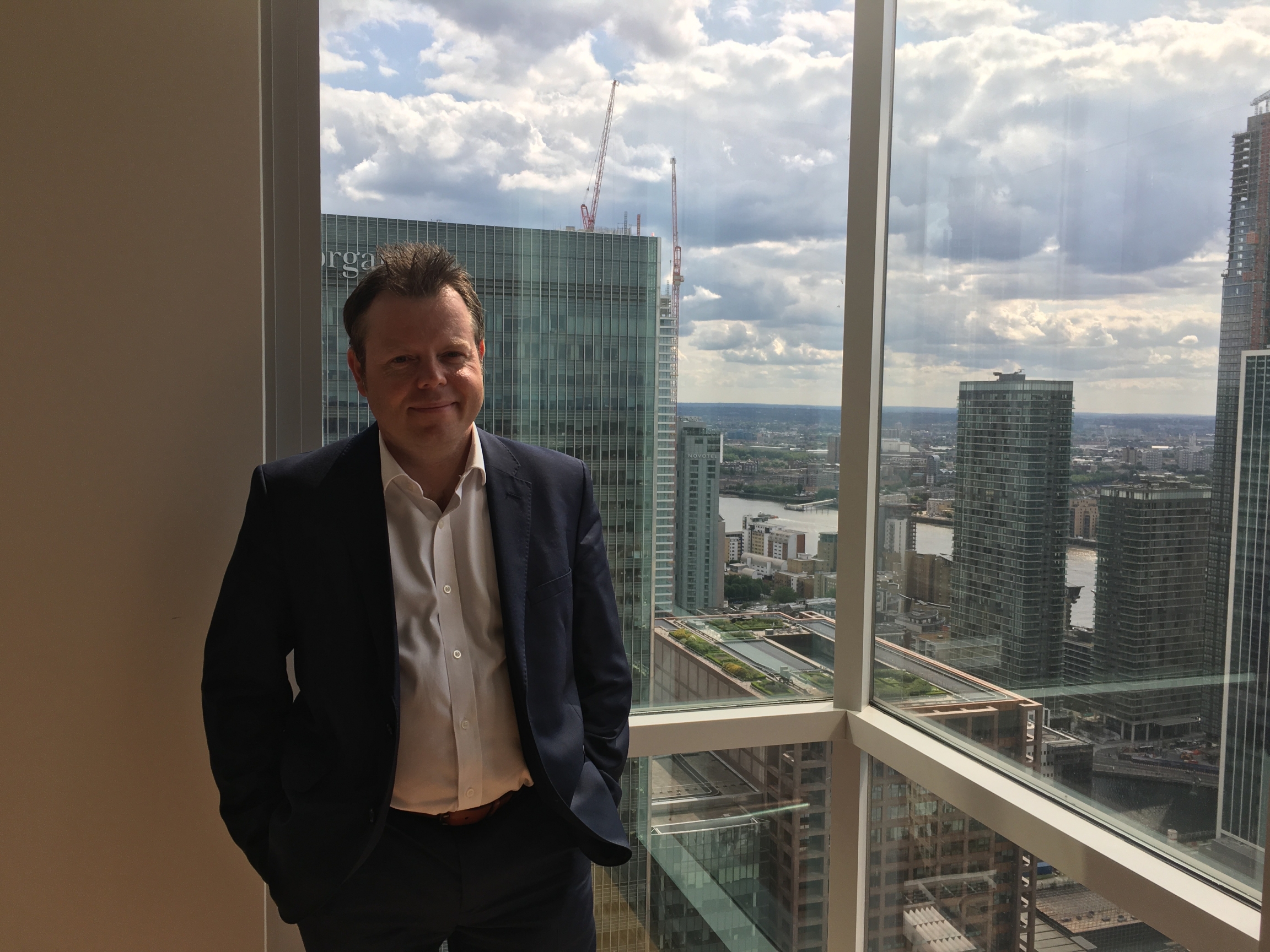 Martin Gettings, the head of sustainability at Canary Wharf Group, is working to reduce plastic waste across this multibillion-dollar commercial estate, which has been labeled the first plastic-free commercial district in the UK.

“It all culminated in World Environment Day this [past] year where we were announced as the world’s first plastic-free commercial center and the first district in London to achieve this status,” he says.

This accreditation, given to Canary Wharf on June 5, 2019, comes from the group Surfers Against Sewage or SAS. To get it, Canary Wharf had to hit a number of targets showing their commitment to reducing plastic. Gettings considers this the start of the journey.

“Achieving status and having a certificate on the wall doesn’t mean anything. What’s important is that the behaviors and the culture that we’ve created carries on.”

“Achieving status and having a certificate on the wall doesn’t mean anything,” he says. “What’s important is that the behaviors and the culture that we’ve created carry on.”

The goals are developed based on the size of the community going for accreditation. For example, one target was for Canary Wharf to get 34 businesses to agree to cut out three items of single-use plastic. Ultimately, they signed up 50 businesses.

Related: You’re not being fleeced: This carbon-negative sweater comes with sheep included

“Of course, it really is just a drop in the ocean compared to what is being generated every day across the world,” Gettings says. “But what it does do is it highlights the issue and it shows other people that this actually can be done. If all communities and all cities did this, we’d be well down the way to resolving this problem.”

However, a quick walk through the mall reveals lots of single-use plastic in this supposedly plastic-free zone. There are rows and rows of plastic-wrapped sandwiches in coffee shops, and supermarkets are filled with plastic-wrapped packaging and plastic bags.

Rapper and music producer Adian Coker says he pops into the Waitrose supermarket here almost every day. He brings his own shopping bags and is supportive of any initiative to reduce plastic.

But when he finds out that Canary Wharf has plastic-free status, he’s wary.

“I come into Waitrose every day, and they still use plastic bags. You can take a bag every single time if you want to.”

“What does that actually look like, though?” he asks. “I come into Waitrose every day, and they still use plastic bags. You can take a bag every single time if you want to.”

SAS, the Cornwall-based group that designated Canary Wharf its first plastic-free commercial zone, has given that accreditation to hundreds of communities across the United Kingdom.

Penzance, the first plastic-free community in the UK

Sun slips through clouds, framing the dramatic outline of St. Michael’s Mount, a monastery perched on an island just off the coast of Penzance, a town in the rugged southwest corner of England. Rachel Yates, a volunteer-turned-staffer at SAS, isn’t looking at the view, however. She’s walking along Marazion Beach with her eyes glued to the ground, looking at all the small pieces of plastic intermingled with the sand.

“You can’t pick all of this up, you know?” Yates says. “We could spend the whole day clearing a patch, but you’d come back tomorrow and it’d be just as bad. And that really upsets me. This is a prime example of how we cannot beach-clean our way out of this problem.” 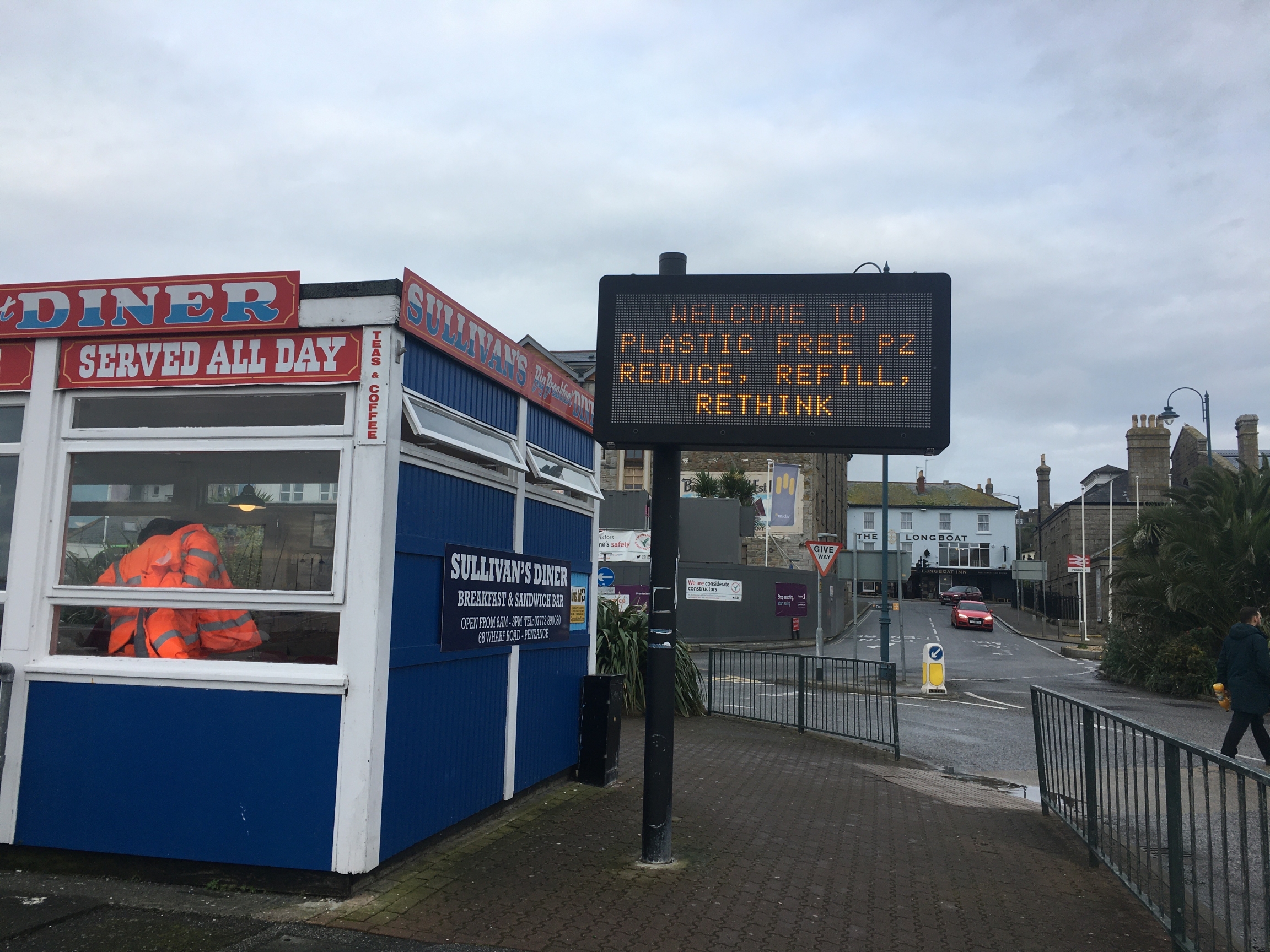 Penzance was the first community to be accredited under the Plastic Free Communities program. There is a strong movement in the town to continue reducing single-use plastic usage.

That’s why Yates was so excited when SAS launched its Plastic Free Communities program and its toolkit for accreditation. She says it provides a structure for tackling the problem at its source.

“If you have a flood, you don’t manically mop, you turn the tap off,” she says.

“But it was the toolkit that showed how you turn the tap off, how to get started.”

The toolkit includes steps like getting local businesses to cut out at least three items of single-use plastic, working with schools and community groups, holding events and setting up a steering group.

Yates helped the nearby town of Penzance get plastic-free status in 2018, making it the first community in the UK to do so. It got a lot of press coverage.

“We had news teams from Japan, Germany, from Canada and from Denmark. Suddenly, I realized that we had done something really important here in terms of raising people’s awareness and showing a community can do something about it.”

“We had news teams from Japan, Germany, from Canada and from Denmark,” Yates says. “Suddenly, I realized that we had done something really important here in terms of raising people’s awareness and showing a community can do something about it.”

In downtown Penzance, everyone seems to know about the accreditation. For the most part, they’re really positive about it. But not everyone.

“Well, it’s not really plastic free though, is it?” resident Shaun Harris says. “You still get carrier bags. So, there is plastic everywhere. There’s a bit of plastic hanging out to the bin over there.”

“So, the name is the campaign name; it doesn’t mean that Penzance is plastic free,” Yates says. “It means you are on the journey and to get the status, it is hitting milestones to show that you’ve laid the foundations for that journey.”

She says the program aims to get local businesses to commit to reducing plastic and that will hopefully put pressure on chains to do the same.

Yates’ explanation seems to rid Harris of some of his skepticism about the program.

SAS headquarters are in St. Agnes, a small community known as a surf hub. The offices are in a reconverted tin mine, a reminder of Cornwall’s postindustrial legacy, and are within walking distance from a cliff that juts out over the sea.

When it started back in 1990, SAS was a group of surfers and beach lovers who would go out and clean their favorite beaches. SAS still runs beach cleanups across the UK. But now, they also focus on tackling plastic waste at the source, which includes lobbying government and businesses for change. They led a campaign for a ban on plastic straws, stirrers and ear swabs, which the UK government passed in May 2019.

“We can equally wear a wet suit here in St. Agnes in Cornwall or put on a suit and tie and talk to people in Canary Wharf,” jokes Hugo Tagholm, the chief executive of SAS.

SAS launched Plastic Free Communities in 2017 based on the model for accrediting Fair Trade communities. Tagholm says lots of people wanted to address the plastic issue but didn’t know how to do it. So, they developed a five-step plan.

“That’s why it’s been so successful,” Tagholm says. “People have loved it. It’s enabled them to organize.”

In the past two years, 660 communities have been accredited as Plastic Free Communities, though, of course, they aren’t technically plastic free.

“If we had named the program the ‘slightly less plastic communities’ program, it wouldn’t have been inspirational for people. There is a clear vision with the name we chose that people want to work toward. It is a long-term commitment.”

“If we had named the program the ‘slightly less plastic communities’ program, it wouldn’t have been inspirational for people,” Tagholm says. “There is a clear vision with the name we chose that people want to work toward. It is a long-term commitment.”

Ultimately, Tagholm says, the accreditation is just meant to be a starting point.

The World ran this idea past several experts on waste reduction and environmental communication. Some said they found the plastic-free designation a bit misleading though they said the program is doing good work. One expert, however, said the name shouldn’t be quibbled with as the real problem is big oil companies that continue to spew out cheap and unnecessary plastic.

A new refill milk machine and rows of glass bottles now sit in the corner at Thornes, an independent grocery store in Penzance that has become a plastic-free champion under the initiative. Even so, there are also bright-colored aisles filled with plastic shampoo bottles and pencils in plastic packaging.

However, owner Sue Hendy says they are making changes where they can. She says they’ve stopped buying prewrapped apples, for example, and now sell potatoes in paper, not plastic bags.

“We are just trying to find alternatives, step-by-step. Some things work, some things didn’t.”

“We are just trying to find alternatives, step-by-step,” she says. “Some things work, some things didn’t.” 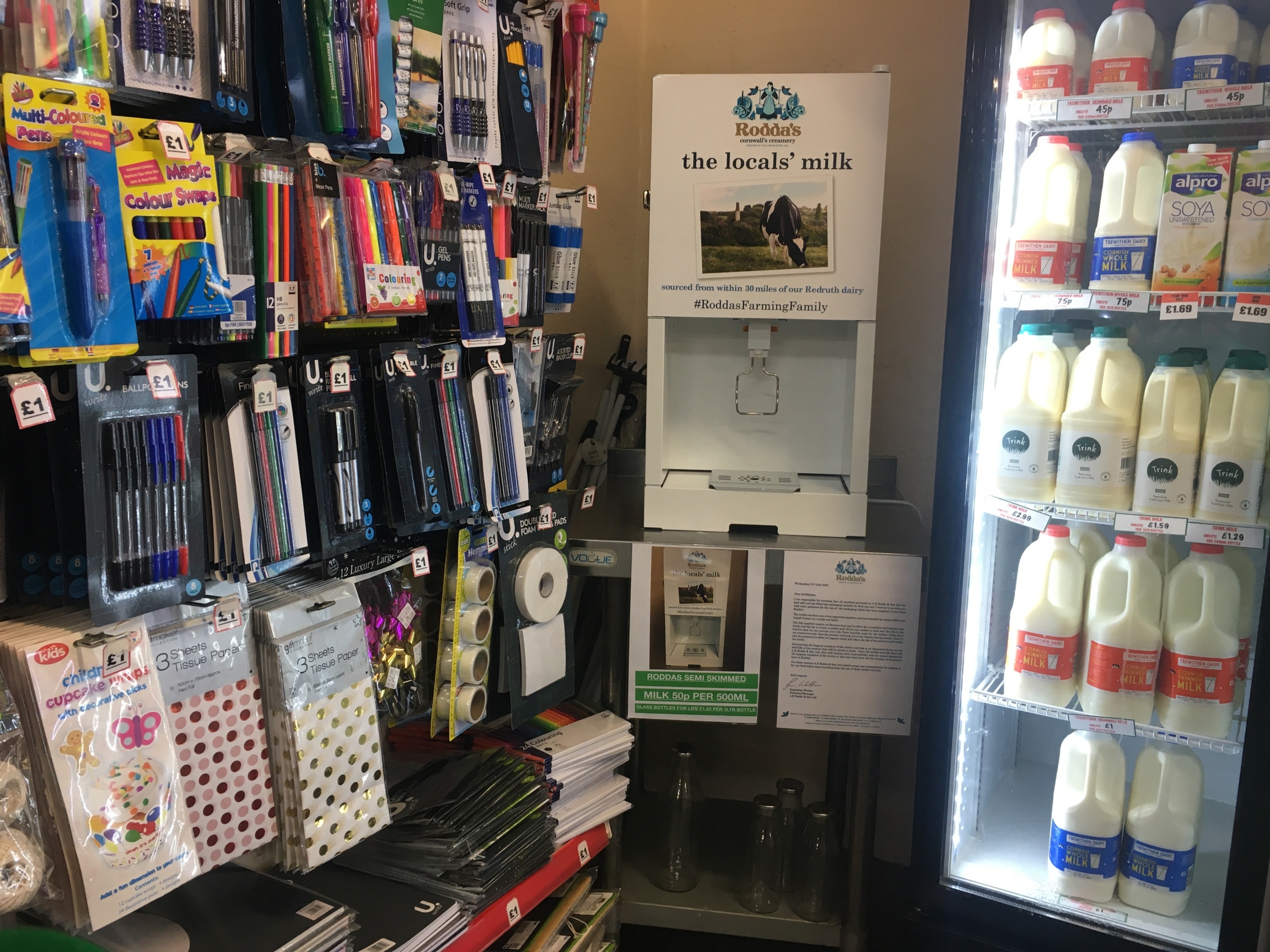 In a bid to offer customers a plastic-free option, Thornes has just set up a milk refill machine stocked with local milk. Customers can pick up glass bottles and bring them back.

For example, they tried putting sausages in paper wraps but soon abandoned their efforts.

She says it is all about trial and error.

“There will always be people who say ‘the milk is still in a bag in the box,’ but we are trying, you know,” she says. “It’s better than just sitting back and going, ‘Oh well, there is nothing we can do, so, let’s just leave the milk in a plastic bottle. We are trying to do something. And just make a difference.’”