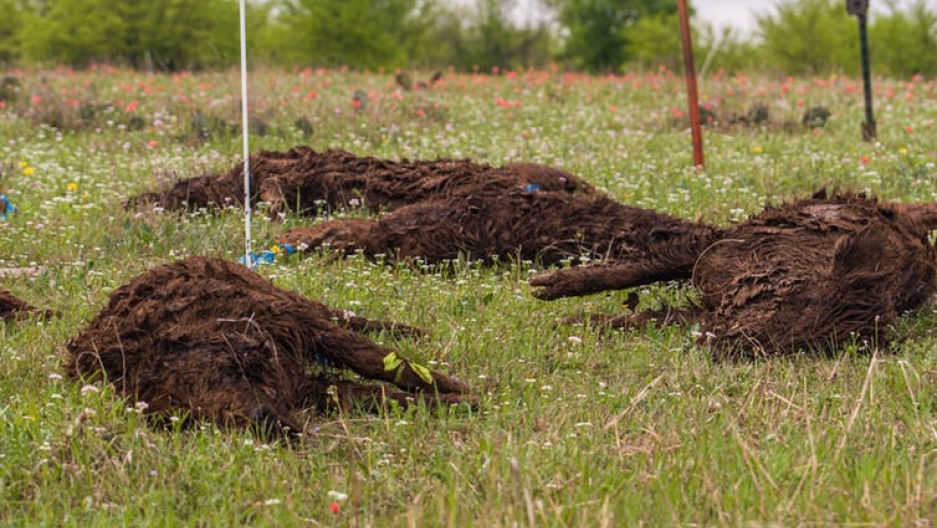 To understand the effects of a big die-off, researchers set up experiments with wild boar carcasses.

The unprecedented wildfire raging across Australia is not only destroying human lives, but has killed hundreds of millions of animals – perhaps billions before it is all over.

Burning is not the only cause of death in this catastrophe. Many animals have outrun the flames only to die in fences and roads by the thousands. Others may live, for now, but, without their homes, food and water, are likely to succumb to the elements soon.

Unfortunately, animal die-offs of massive proportions are becoming more frequent. Global change — which includes human-caused changes in climate, land use, fire regimes and other things — may largely be to blame for the increased frequency and intensity of mass mortality events across all kinds of animals.

Related: Koalas are the face of Australian tourism. What now after the fires?

This was the case in 2015 when unseasonably warm and humid weather allowed a normally benign bacteria to wipe out 200,000 saiga antelope in Kazakhstan in just a few weeks. Similarly, a single lightning strike killed 323 reindeer in 2016, and another 200 starved last year at once after unseasonable rain left an impenetrable layer of ice covering their food. And, for five years in a row, tens of thousands of starved sea birds have washed up in Alaska. These are just a few recent examples.

So, what happens when everything dies all at once?

The researchers monitored carcasses in a simulated mass mortality event.

An experimental approach to die-off events

Studying MMEs is difficult because they are unpredictable and can occur anywhere around the world, making it logistically challenging to study the actual events. Even if we could hop on a plane and travel to a distant mass mortality event quickly, we wouldn’t have data on what the ecosystem was like before, so drawing conclusions would be nearly impossible.

To overcome this hurdle, we have worked with wildlife biologist Marcus Lashley and David Mason at the University of Florida to take on the dirty task of simulating mass mortality events in large experiments with thousands of pounds of carrion.

In spring 2019 we began our largest experiment to date, deploying nearly 15 tons of carcasses in Oklahoma. Our first challenge was finding a large — and ethical — source of carcasses. We partnered with professional trappers who were removing feral pigs, an invasive species that has potential to damage crops, spread disease and negatively affect wildlife. These wild boar were trapped for conservation purposes. Rather than having their carcasses go to waste, we were able to put them to good use.

We wanted to see how increasing amounts of carrion affect decomposition in ways that may alter ecosystems or promote the spread of pathogens. Before the carcasses arrived, we identified plots and sampled the initial soil, microbes, plants, insects and wildlife. This provided important baseline information that wouldn’t be available during a real-world mass mortality event.

The real work began after the carcasses arrived. Pigs have a stinky reputation for a reason, and feral swine — especially several tons of dead ones — are not a pleasant sight or smell. We carefully placed each carcass, which averaged about 70 pounds, in the predetermined plots. Some plots received a single pig to represent a “normal” death event; others received 10 carcasses to represent an MME.

Quickly, the plots were buzzing with flies, and vultures circled above. We monitored the decomposition during the first few days, which are by far the most gruesome. Scavengers shredded some carcasses, dragging their remains deep into nearby forests. Unscavenged carcasses bloated with gas before bursting open and revealing millions of writhing maggots inside.

During this time we documented decomposition rate, monitored insect and scavenger visitors, and collected microbial samples to detect disease-causing bacteria. Over the next several weeks, the microbes, insects and scavengers did their job, and soon nothing remained but bones and fur. We will monitor this experiment for several years to identify the long-term ecosystem consequences of mass mortality.

What happens after many die at once

First, the sheer magnitude — hundreds or thousands — of individuals removed from the ecosystem means that their roles in the environment are lost too.

In Australia, as much as half of the koala population in some areas have been killed by fire. Besides being a national symbol and source of ecotourism, koalas are important to the ecosystem as one of the few animals that can consume and recycle nutrients from eucalyptus plants. The widespread death of koalas means a significant break in the food chain — nothing is left to eat eucalyptus.

Similarly, the mass mortality of small mammals, rabbits and kangaroos means that few prey will remain for predators like dingos, who may struggle to avoid starvation in the now barren landscape. Fires also kill less charismatic species such as insects and bats, both of which are important for pollination, and their loss may represent a challenge for post-fire plant communities. Without these and other animals present to perform their ecological jobs, Australia’s ecosystems will undoubtedly change.

Secondly, the large number of rotting carcasses caused by a mass mortality event will have their own environmental impacts.

While some of the animals in Australia will be consumed by fire and their bodies quickly transformed into ash, those that meet their fate outside of the flames will begin to decompose. Under normal circumstances, carrion triggers scavengers to flock to the carcasses, consuming the flesh and recycling the nutrients into the ecosystem. 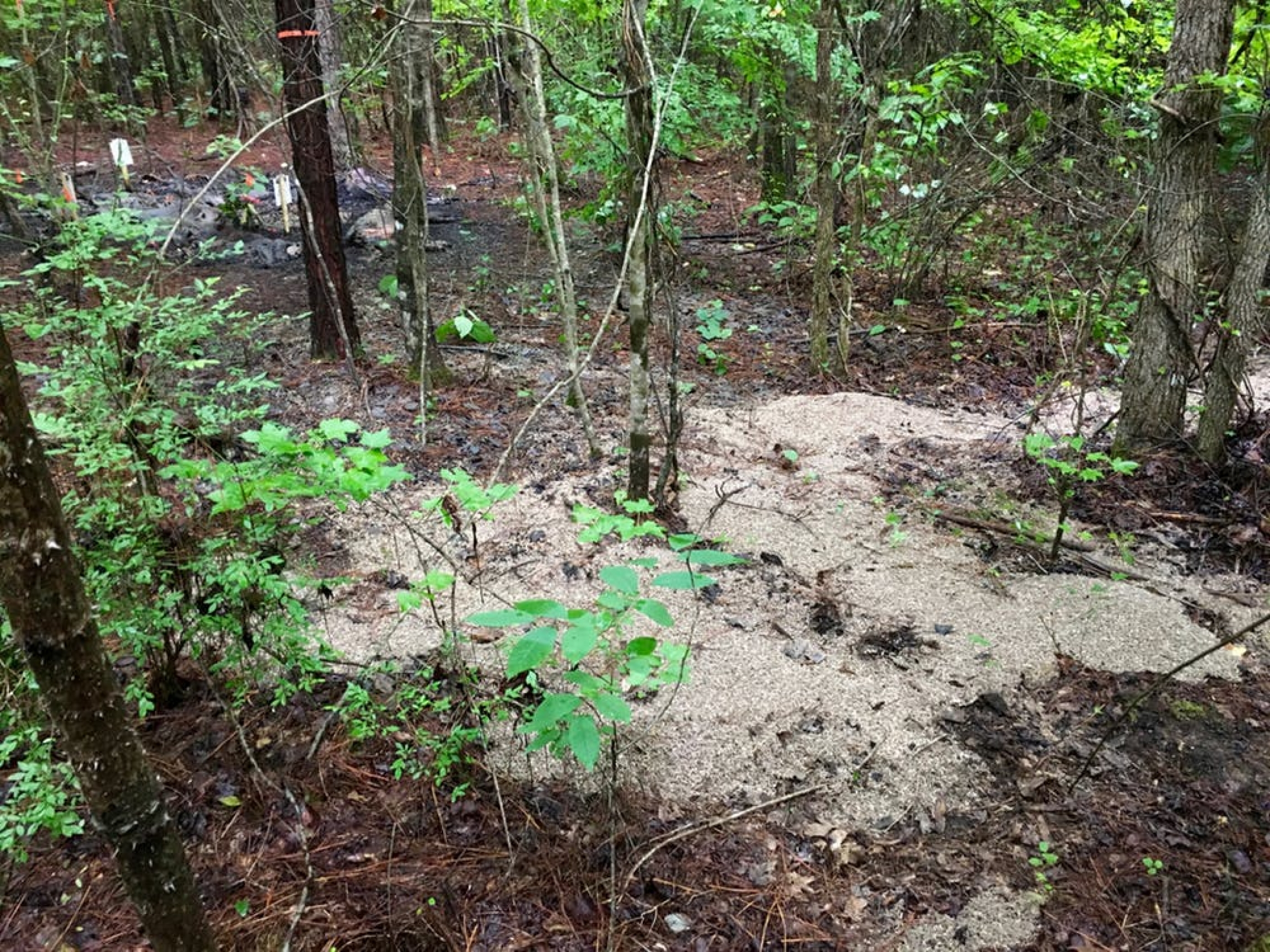 A river of maggots emerges from a simulated mass mortality event in 2016.

However, the ongoing mass mortality of kangaroo, koala and other large animals will produce more carcasses than scavengers — eagles, dingoes and a species of reptiles known as goannas — can keep up with. Instead of disappearing quickly, carcasses will likely become breeding grounds for bacteria and insects. This is worrisome, because many of these may be pathogens that affect people, wildlife and livestock, and the flies can transport pathogens great distances. In fact, in previous experiments, our simulated MMEs produced enough flies to cover the ground in a river of maggots.

Our work has also revealed that mass mortality events can have long-lasting effects by poisoning soil and restructuring plant communities. As carcasses decompose, they release gases and spill cocktails of liquefied remains, acidic body fluids and microbes that the soil absorbs. When this happens en masse, the toxicity can kill plants, including trees. Our unpublished data repeatedly show that MMEs alter the soil microbiome and soil nutrients. How long these effects can last is unknown. 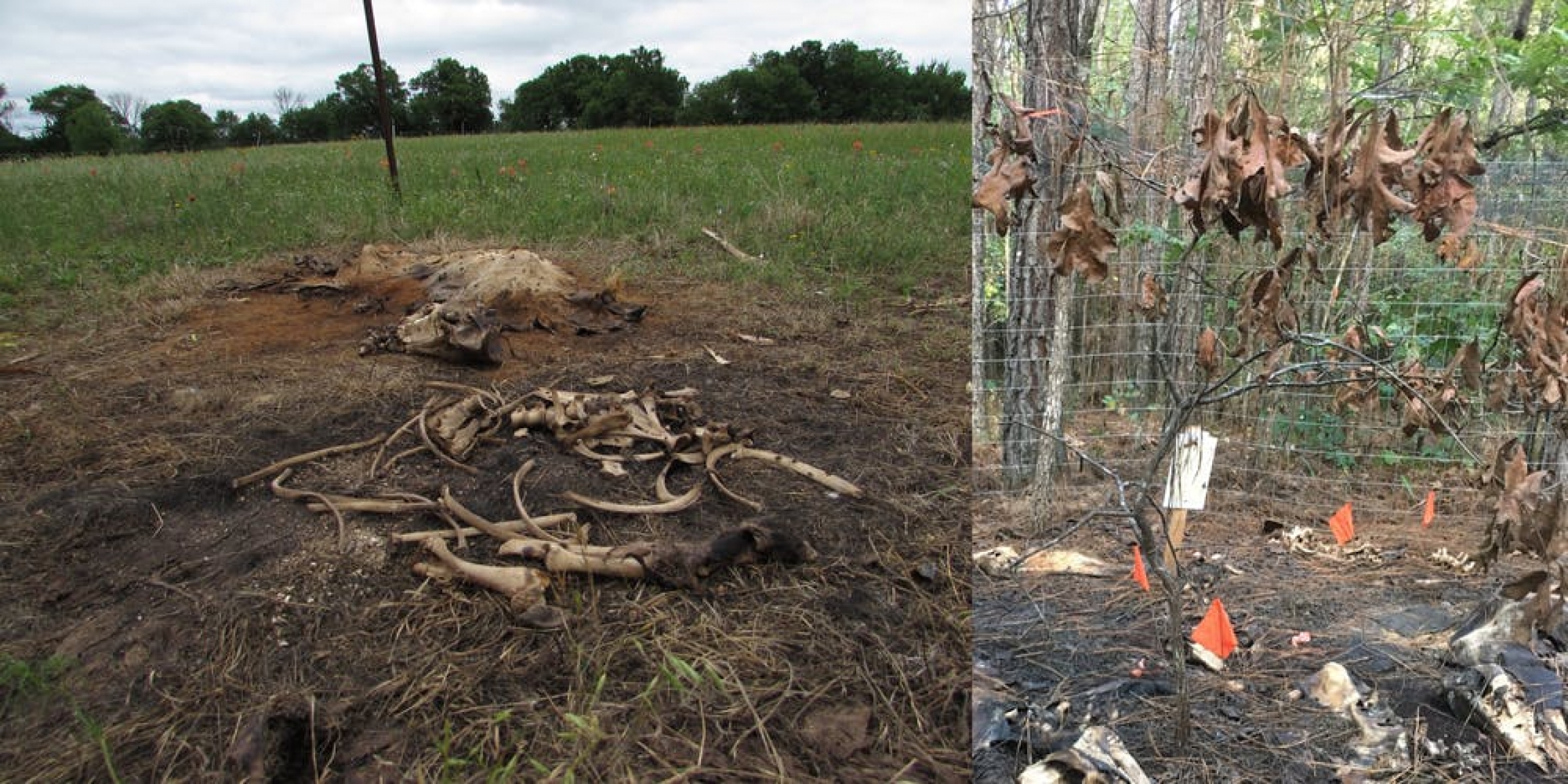 Only bones and fur remained a few weeks after a simulated MME (left). Chemicals leached into the soil during decomposition create a "cadaver island," killing plants and trees (right).

What can help get ecosystems back to normal

The effects of MMEs on ecosystems are complex, but one thing has been consistent across our multiple studies: Healthy scavenger populations reduce the effects of mass mortality events.

Scavengers like vultures, coyotes and dingoes are among the most persecuted groups of animals worldwide, yet they provide critical ecosystem services. When scavengers were present in our experiments, the carcasses were consumed or dragged away quickly, producing fewer maggots and flies, leaching fewer chemicals into the soil, and having a lower impact on the plants and ecosystem. 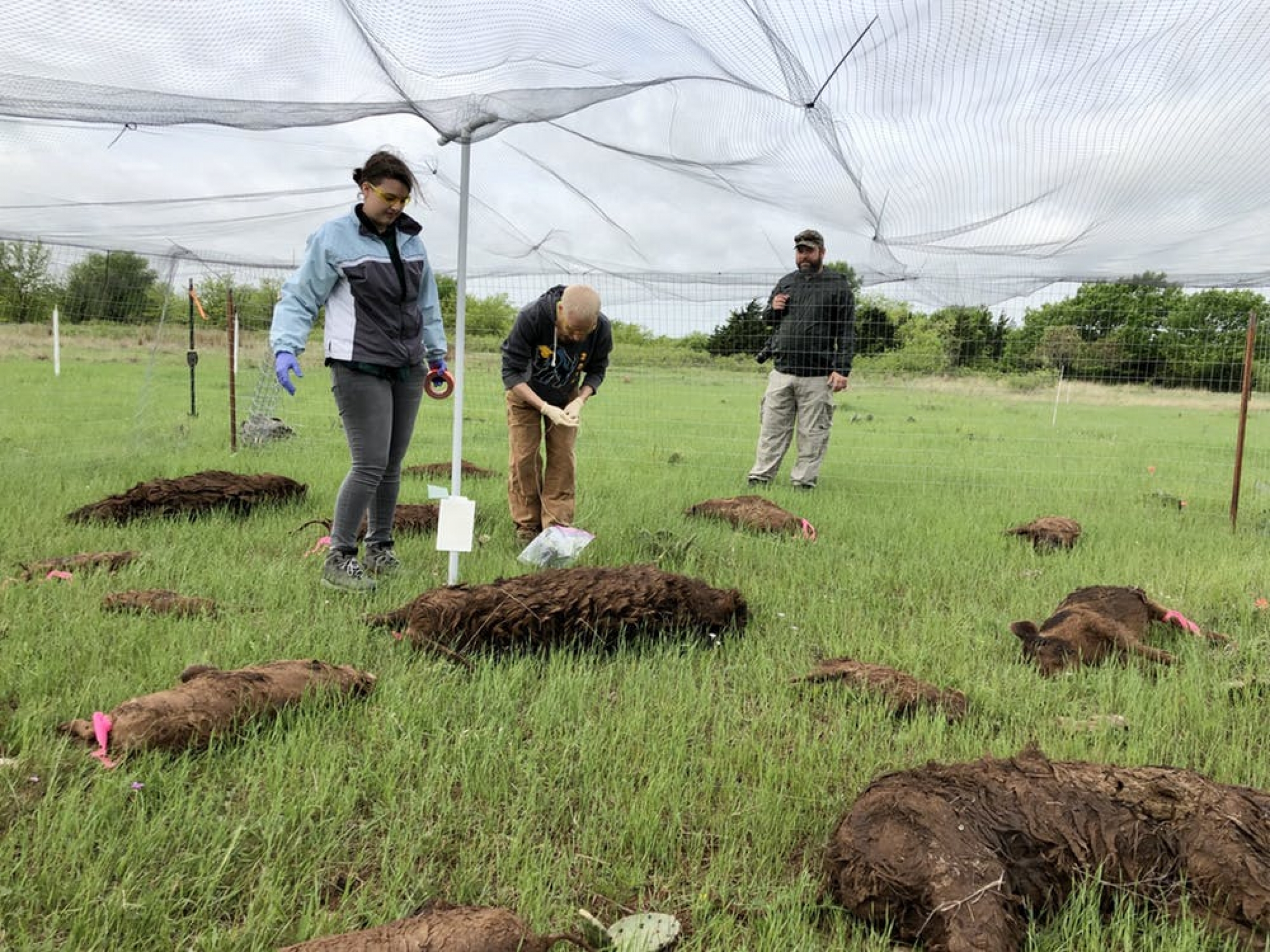 Researchers used fencing and bird netting to keep vultures and coyotes out, to better understand the role of scavengers — and the consequences of losing them.

While Earth’s ecosystems may not be able to avoid future mass mortality events, an obvious priority is to maintain the biodiversity we have — including the scavengers that clean up the mess.

In Australia, dingo, eagle, and goanna populations are likely to benefit from the ample carrion provided by these fires. Unfortunately, inflated scavenger numbers may cause more problems. When the carrion eventually disappears, these overabundant scavengers may be forced to seek food in populated areas, resulting in conflict and attacks on people and domestic animals. Such indirect consequences of these fires are difficult to anticipate.

What is certain, however, is that the ecosystem that emerges after the smoke clears will be dramatically different.