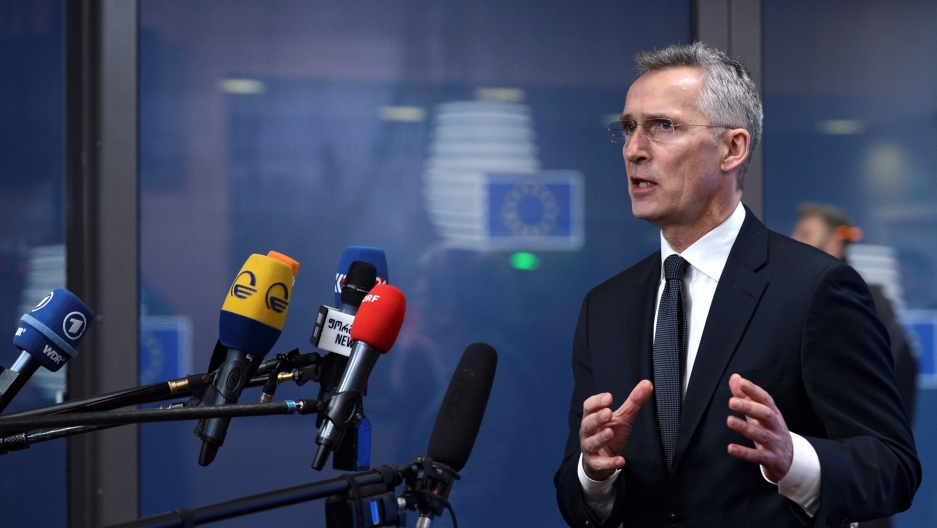 NATO Secretary General Jens Stoltenberg holds a news conference ahead of a European Union foreign ministers emergency meeting to discuss ways to try to save the Iran nuclear deal, in Brussels, Belgium, Jan. 10, 2020.

Fearing that a miscalculation from either Iran or the United States side could leave Europe facing a war at its doorstep and the possibility of nuclear proliferation, European Union officials met on Friday in an emergency meeting.

Following the meeting in Brussels, EU foreign ministers, joined by NATO Secretary-General Jens Stoltenberg, announced no new concrete diplomatic decisions after Washington and Tehran backed off this week from an outright conflagration following the US killing of a top Iranian general in Iraq and retaliatory missile strikes by Iran that avoided military casualties.

"Don't expect much. It will ... reiterate our unity and call to preserve the nuclear deal," an EU diplomat told Reuters. "We need cool heads now."

However, Iran's resistance to an independent inquiry into the deadly crash of a Ukrainian airliner in Tehran made it harder for the European Union's 28 ministers to show too much goodwill. Canada and others believe the plane was downed by an Iranian missile, probably by mistake.

French Foreign Minister Jean-Yves Le Drian had already warned before Friday's meeting that Iran could have a nuclear weapon in one to two years if the country fully breaks with a nuclear containment accord it reached with world powers in 2015.

"We want this (nuclear) agreement to have a future, but it only has a future if it is adhered to and we expect this from Iran," German Foreign Minister Heiko Maas told reporters in Brussels.

Iran has been gradually discarding the deal's limitations on its enrichment of uranium for nuclear fuel since President Donald Trump withdrew the United States from the accord in 2018, demanding tougher curbs on Iran.

Tehran has said its steps away from the agreement are reversible if Washington returns to it and lifts sanctions that have throttled much of Tehran's lifeblood oil trade.

Britain, France and Germany — the European powers that are party to the deal along with China and Russia — have desperately tried to pressure Iran to stick to it.

Europeans also want to convince Trump, who on Wednesday called on them to join him in withdrawing from the nuclear deal, that they are tough-minded allies who will not be deceived by Tehran.

They also fear the US-led coalition fighting ISIS militants in Iraq could be weakened, undermining a core strategic interest for the EU.

"What's most worrying is a miscalculation from either side," said a French diplomatic source.

Following the US drone strike that killed Iranian commander Qasem Soleimani last week, Tehran announced on Sunday it was scrapping all enrichment curbs — leaving the European powers in an awkward position.

Iran has repeatedly denied its nuclear program has military rather than civilian ends. But it has already breached many of the restrictions meant to increase the amount of time Tehran would need to accumulate enough fissile material for an atomic bomb from two to three months to about a year.

The latest announcements could start reducing that time and the three European powers are keen to send a firm message that the breaches are unacceptable.

They have agreed to begin a dispute resolution process under the 2015 deal that could lead to renewed UN sanctions on Tehran, but have hesitated on the timing fearing Iran may react badly, given its current confrontation with Washington.

"We were planning to do so, but now it would be seen as an escalatory measure. We still need to focus minds, but it's probably coming soon," a second EU diplomat said.

Despite its moves, Iran has said the United Nations nuclear watchdog, the IAEA, can continue its on-site inspections at its atomic sites, leaving some room for diplomacy.

By John Irish and Robin Emmott/Reuters