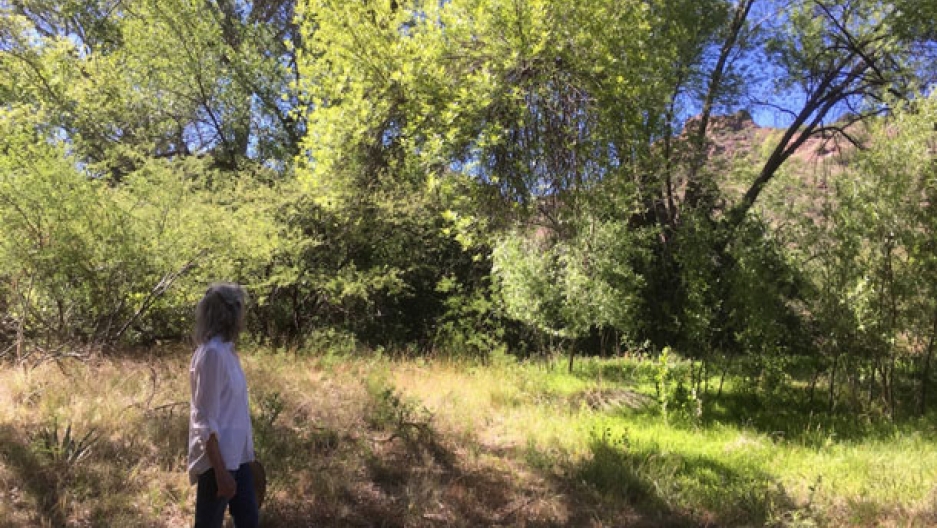 Valer Clark next to a riparian forest, which serves as a bridge between the water and the land.

In a dry region of the southwestern United States and northern Mexico, a woman named Valer Clark, from New York City, has had a major influence on land and water preservation.

“There are four great geological forces: There's volcanism, plate tectonics, erosion — and there's Valer,” said Ron Pulliam, an ecologist formerly with the United States Department of the Interior and founder of nonporfit Borderlands Restoration Network. “Valer is one of the forces that has created the landscape around us here.”

The region is considered desert or semi-arid, but for a couple of months each year, it is awash with water from the seasonal monsoons. The normally dry riverbeds fill with floodwater and swell to create habitat for all manner of water birds and amphibians. The watery paradise is short-lived, though, and most of those streams dry up in a matter of weeks. But that wasn’t always the case. A network of streams, rivers and wetlands once crisscrossed the landscape.

In fact, more than 150 years ago, around the time of the Civil War, people in the region struggled with malaria, a mosquito-borne illness typically associated with tropical, wet climates.

Before the arrival of settlers, the region didn’t have much water, but there were some dense grasslands. Forests grew alongside rivers that meandered across the open landscape, and wetlands popped up every 20 or 30 miles along those rivers.

Over 100 years ago, the region was made rich by the “three Cs”: copper, cotton and cattle. The three Cs generated a lot of money, but heavily degraded the land.

When Clark first visited back in the 1970s, decades of mining and agriculture had left the arid soil dry and cracked. Few trees remained, and the riverbeds were deeply eroded. Clark came from a wealthy family in New York City. She and her husband at the time were traveling in Mexico and fell in love with the austere land. The wildness of the open, parched landscape drew them in.

“We just came across this ranch by accident, and he said, ‘Well, why don't we bid on it,’” Clark said. “I bid so low, I didn't think we'd ever get it. I was thinking in terms of this being a summer place or something like that.”

That whimsical purchase eventually ballooned into her life’s work.

Related: Land restoration on the Gulf Coast is showing some progress

“When I got here and started seeing the lack of water and seeing the situation, what it looked like — the hills were bare and there was no grass — I thought, ‘I wonder if you could make a change. I wonder if there's something you can do about this,’” Clark said. “And I started doing it, and I realized you can. And I guess I got hooked.”

Clark eventually bought and rehabilitated some 150,000 acres of land in northern Mexico and the southwestern US — an area more than 10 times the size of Manhattan. The area, which encompasses land between Douglas, Arizona, and Agua Prieta, Mexico, in the state of Sonora, looks rather inhospitable, but Pulliam said it is prime cattle-grazing territory.

All those cows led to disaster for this delicate landscape: “If you put hundreds of cows out on a small area here, you basically reduce all the ground cover,” Pulliam said. “So, when the rain comes, it just runs off the land rather than being caught up in the vegetation.”

Keeping that rainwater on the land is the fundamental key to what Clark is doing to rehabilitate her property. More water will mean more grass and trees — habitat for the wildlife that was once common here. It’s sort of a "build it, and they will come" philosophy.

Clark's solution to rehabilitating the degraded land relies on something called a gabion —  basically, a wire basket filled with rocks that is placed in dry riverbeds. Gabions are about 3 feet tall — some just 5 or 6 feet wide, others more than 100 feet across. Clark and her crew have built more than 20,000 of them on her property. They all sit in riverbeds that are dry most of the year until the monsoon rains come.

That’s when the gabions get to work. They slow down the water rushing through the riverbed so silt can accumulate behind them. The silt acts like a sponge.

“And that sponge holds the water,” Clark said. “So, the water — instead of just whipping through fast when it rains — 30% of it is held back and goes into the ground. And so, it filters down very slowly.” 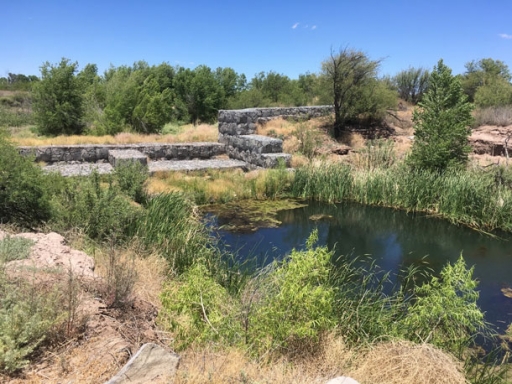 Gabions are baskets of rocks that Valer Clark places in streambeds to slow the water as it rushes through.

The gabions also create pools of water, which become home to insects, birds, rare frogs and endangered fish species. They also provide enough moisture in the soil for trees to grow. Near one stream, a canopy of cottonwood trees towers over a lush green understory that creates the feeling of a jungle that follows the narrow band of water. The forest is a vital corridor for wildlife in the region.

Another area of Clark’s land contains a wetland teeming with life. Reeds and cattails poke up through the water. At least a dozen different species of brightly colored birds dart about, butterflies sun themselves and bright blue dragonflies copulate in midair. Pulliam said this region is a hotbed for insect diversity, including some 450 different species of bees.

“Very strangely, the desert area through here has exceptionally high dragonfly diversity,” he said. “And that's one of the signs of the past extent of wetlands in this area."

Indeed, historical records from the Spanish settlers suggest this region was once a patchwork of wetlands just like this. Gary Paul Nabhan, a desert ecologist with The University of Arizona, said the word sonora actually means "spring-fed wetland" in a Native language.

Related: 'Failure is not an option' for plan to save Louisiana wetlands

These types of habitat are incredibly important for the ecosystem of the whole region, he said. “First of all, in a historical-ecological sense, these were the seedbeds for all the vegetation,” Nabhan said. “But secondly, they were the hubs of human habitation because this is where all the ecosystem services happen. They were as important as the oases were in the Sahara Desert. You would travel 30 miles out of your way to reach a place like this.”

They were also important for migrating wildlife. These were wet steppingstones between central Mexico and Canada.

For all her ecological work, Clark is mindful of serving as a model for other ranches in the region that depend on raising cattle for their livelihoods. She removed most of the cows from her ranch when she bought the place, but she did keep a small herd. She is very deliberate about where and when they graze. And it has paid off. Her ranch manager recruited members of his family to enter three novillo steers in a large cattle exposition.

“All the people in Sonora bring their animals to this big do,” Clark said. “His daughter, Sarah, won first prize among novillos, and she won the grand champion, the overall prize. Then, when the animal was slaughtered, we won ... the prize of having the best cut-up meat. too. So, we couldn't [do] any better than that.”

The hope is that this public win will encourage other ranchers in the area to explore the sustainable ranching that results in award-winning beef and see the advantage of rehabilitating their own degraded land.

“I think the next thing is having people come and see the benefits of what we've done — that it is possible to turn land around,” Clark said. “I think it's important. The next step would really be to reach out to other people and let them know that it's possible to heal really sick land.”

In fact, Clark’s work is already spreading across the region — literally. The water she retains with her gabions does not stay on her land alone. It seeps into the water table and flows downstream, hydrating degraded lands for miles around.

And in a region where water is wealth, Clark is already sharing the profits of restoration.

This article is based on a report by Bobby Bascomb that aired on Living on Earth from PRX.