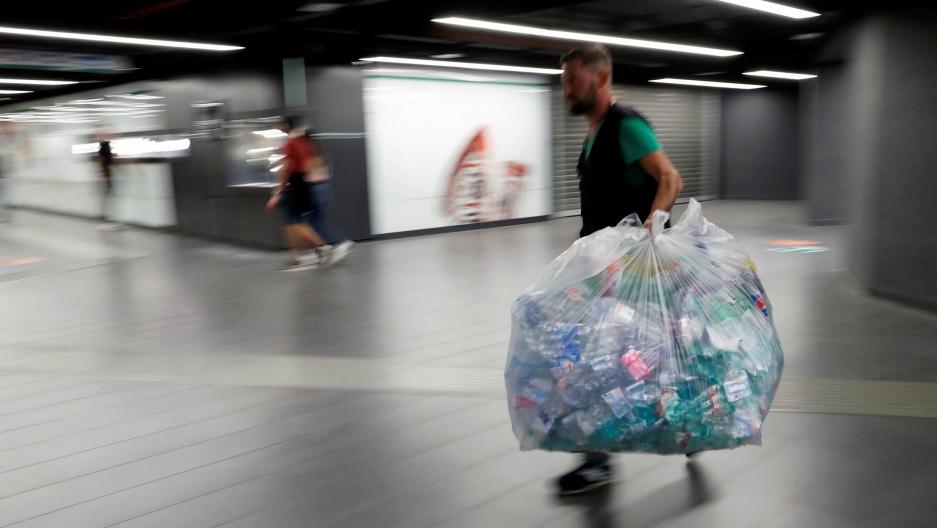 A worker walks as he holds a plastic bag full of plastic bottles in San Giovanni metro station in Rome, Italy, Sept. 27, 2019.

Worldwide, less than 10% of the plastic we use gets recycled. Most ends up in a landfill. And much of that eventually makes its way out to sea, clogging up our oceans.

And here’s the extra bad news: Global demand for plastic is projected to triple by midcentury.

Here’s the problem with plastic: It’s super useful, lightweight and strong, and smooth and flexible. Back when Dustin Hoffman’s legendary character in the movie, “The Graduate,” was entering the workforce a half-century ago, the career advice was simple: “Just one word: Plastics!”

But the guy giving advice to the young college graduate probably wasn’t thinking of all the junk we’d still be stuck with two generations later. Plastic toys, straws and tiny ketchup pouches — things that make life more convenient — can take hundreds of years to degrade.

Here’s the other problem. Plastic isn’t just plastic. There are hundreds of different kinds. Think of a flexible plastic baggie versus a water bottle versus rigid plastic for your computer keyboard. Most of us just toss it all in a blue recycling bin and say: “Should be OK.”

“The industry has started calling that wish-cycling,” said Susan Collins, president of the Container Recycling Institute in California. “Especially with curbside recycling that uses this single-stream process where we put all our recyclables in one bin, the expression we use a lot is that, ‘You can’t unscramble an egg.’”

And when recycling gets contaminated, it becomes trash, bound for the landfill. Still, even if you deliver a pristine batch of plastic bottles to the recycler, there’s another hurdle.

“Plastics are inherently susceptible to some decrease in their properties when they’re recycled.”

“Plastics are inherently susceptible to some decrease in their properties when they’re recycled,” said Sue Selke, director of the Center for Packaging Innovation and Sustainability at Michigan State University.

There are only so many times a plastic bottle can be melted down and reused before it degrades too far in quality.

“That leads to this overabundance of plastics in our waste streams,” said Brett Helms, a staff scientist at the US Department of Energy’s Lawrence Berkeley National Laboratory. His team is designing a new type of plastic, PDK (polydiketoenamine), which can be use over and over. 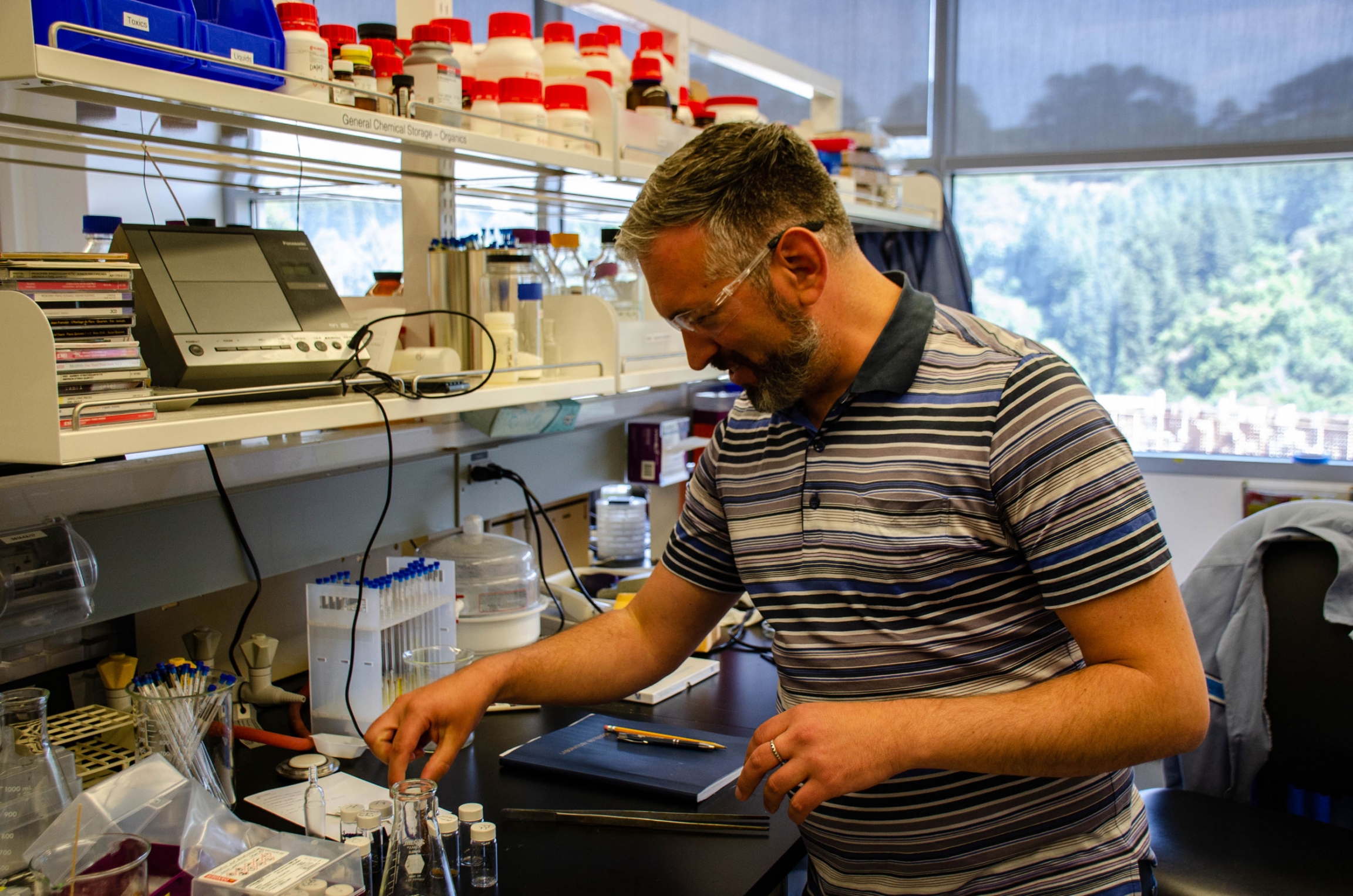 Scientist Brett Helms at the US Department of Energy’s Lawrence Berkeley National Laboratory.

“What we've created is a plastic that can be deconstructed into its molecular building blocks.”

“What we've created is a plastic that can be deconstructed into its molecular building blocks,” Helms said.

So, for example, a phone case could be later rebuilt into a watchband or part of a new shoe. “And the way that becomes possible is by designing plastics to degrade with essentially no difference in quality or performance from the virgin resin.”

Most plastics are not like Legos. Once the pieces — or molecules in this case — are snapped together, they can’t easily be taken apart.

“But for recycling, you need to go in the reverse direction,” Helms said. “So, you need to take these big long chains that may have other things in them, and you have to be able to efficiently deconstruct them at the molecular level.”

Acid allows this new plastic to be depolymerized — broken down into basic molecular building blocks called monomers — and Helms hopes that his new plastic encourages other innovators to rethink how plastic is designed.

The British newspaper, The Independent, asked if this could be the holy grail of plastic.

“If you think it’s the holy grail, you’re definitely getting prematurely excited.”

“If you think it’s the holy grail, you’re definitely getting prematurely excited,” Selke said, adding that she still wants to learn more about this new plastic being cooked up in the labs of Berkeley.

Some commercially available plastic can already be broken down to the molecular level. (The new plastic in Berkeley could be an improvement, however, being more flexible than current plastics that can be chemically recycled.) But there is a problem with chemical recycling: It’s not cheap.

“It takes more expense, more energy, usually to do that kind of recycling than to just do mechanical recycling,” Selke said.

Related: As the world grapples with plastic, the US makes more of it — a lot more

Mechanical recycling is, simply put, melting down old plastics to make new ones. It’s a cheaper way to recycle, but again, you can only do that so many times.

But there’s more to this plastic debate than just economics.

One recent study delivered a sobering statistic: If we fail to rethink how we’re using plastics, by midcentury, when measured pound for pound, there will be more plastic in our oceans than fish.