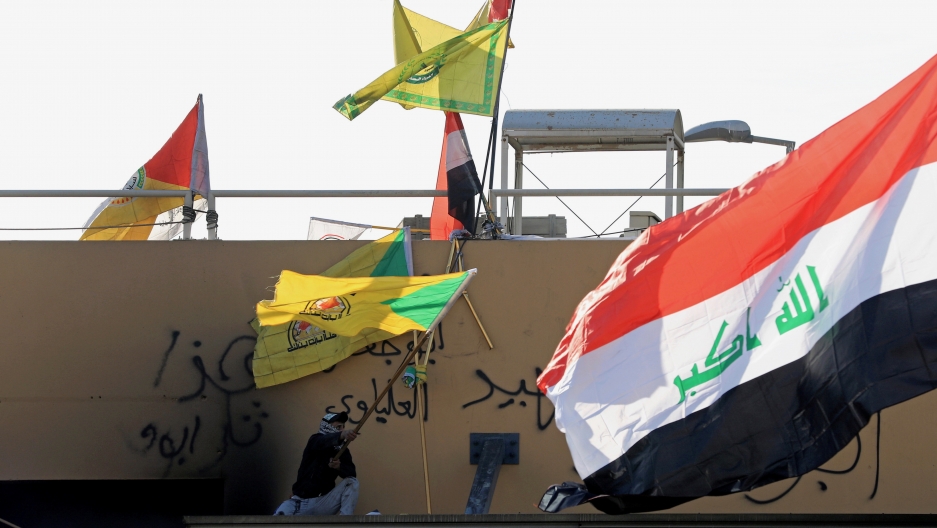 A member of Hashd al-Shaabi waves a flag of Kataib Hezbollah militia group during a protest to condemn airstrikes on bases belonging to Hashd al-Shaabi (paramilitary forces) outside the US Embassy in Baghdad, Jan. 1, 2020.

The United States is sending nearly 3,000 additional troops to the Middle East from the 82nd Airborne Division as a precaution amid rising threats to American forces in the region, US officials said Friday.

Iran promised vengeance after a US airstrike in Baghdad early Friday that killed Qasem Soleimani, Tehran's most prominent military commander and the architect of its growing influence in the Middle East.

The overnight attack, authorized by President Donald Trump, was a dramatic escalation in a "shadow war" in the Middle East between Iran and the United States and its allies, principally Israel and Saudi Arabia. It followed a sharp increase in long-running US-Iranian hostilities this week when pro-Iranian, militiamen attacked the US embassy in Iraq following a US air raid on the Kataib Hezbollah militia, founded by Abu Mahdi al-Muhandis.

In the videos captured from the attack on the American Embassy in Baghdad on Tuesday, some of the attackers are carrying flags. The distinctive yellow flag picturing a raised fist holding an AK-47 at the center belongs to a group called Kataib Hezbollah.

Phillip Smyth, fellow at The Washington Institute, a think tank in Washington, said there are different translations for the word Kataib in Arabic, but the group is often called the Hezbollah Brigades. Smyth, who studies Shiite militias, said Kataib Hezbollah is closely connected to Iran, Iraq’s next-door neighbor to the east; and it is one of the country’s most loyal proxies in Iraq.

Kataib Hezbollah, strongly connected to the Lebanese Hezbollah, formed around 2007. It started very small — with only a couple hundred members. Then, slowly, it grew into a much larger, powerful organization, and more recently, it has operated in Syria, Smyth said. It’s just one of many  Shiite militia groups in Iraq.

In his Shia Militia Mapping Project, Smyth has documented the activities of Shiite militias in the Middle East. He said there are under 100 unofficial Shiite militia groups in Iraq today.

“Official groups, it’s closer to around … in the 60s range,” he said, adding that the Iranians are firm controllers of a good number of these organizations.

Iran’s influence in Iraq goes way back, Smyth said. In the 1980s, the two countries fought a bloody war, however, since the American invasion in Iraq 2003, Iran has sought to increase its influence in its neighboring country. And it has specifically focused on the Shiite communities.

Why? It’s all about regional power and ideology.

Related: US responds to deadly attack at Iraq base

Ayatollah Ruhollah Khomeini, the leader of Iran’s 1979 Islamic Revolution, saw himself as the leader of all Muslims. He also wanted to export Iran’s revolution to other countries. Khomeini's legacy continues to this day. In Iraq, the Shiites are a majority of the country’s population. But they suffered greatly during the decades of Saddam Hussein’s rule. Hussein favored the minority Sunni population. So, Shiites in Iraq looked to Iran and its Shiite religious government for support.

Smyth said since the US-led overthrow of Hussein, the Iranians have courted the Shiites in Iraq as their natural allies.

Malik adds that Kataib Hezbollah has “a history of disobeying orders from the prime minister’s office during the fight against the Islamic State.”

‘Wolves coming to get us’

American troops on the ground witnessed these alliances on a regular basis. Jared Johnson, 38, served two tours in Iraq: from August 2006 to November 2007, and again, from December 2008 through November 2009. He served as an infantryman with the US Army’s 82nd Airborne Division.

Johnson says his platoon knew in that first tour it was dealing with an Iranian-backed militia group because they were the ones that stuck around to fight.

“It was usually higher coordination, more sophisticated weaponry, it was a much bigger deal,” he told The World.

Johnson said he wasn’t familiar with Kataib Hezbollah before this week, but when he heard about the embassy attack in Baghdad, he says, it reminded him of a comment that an Iraqi army sergeant made back in 2009.

By wolves, Johnson says, the sergeant meant the Iranian-backed militias.

He remembers that the Iraqi forces laughed at the sergeant’s comment “because they thought that that’s what the Americans thought of them.”

But the sergeant was being sarcastic — at that point, Johnson says, the Iraqi forces felt confident they could handle any security challenge on their own.

Reflecting on this week’s developments, Johnson says he can’t help but feel sad. “It feels like we spent, as a country, you know, me and other people I served with, so much time and effort over there that it just … it’s almost like a waste. It makes me sad. I just don’t know a better word than that,” he said.

“It feels like we spent, as a country, you know, me and other people I served with, so much time and effort over there that it just … it’s almost like a waste. It makes me sad. I just don’t know a better word than that.”

The leader of Kataib Hezbollah goes by the name Abu Mahdi al-Muhandis. Muhandis was born to an Iranian mother and an Iraqi father. He has lived and studied in Iran and is fluent in Farsi. Recently, Iranian state media showed a documentary about him. In it, the militia leader says he is proud to speak Farsi.

The American government was concerned about Kataib Hezbollah well before this week’s attack. In 2009, the US State Department designated the group as a terrorist organization. In the press release, it said, “Al-Muhandis and Kata'ib Hizballah have committed, directed, supported, or posed a significant risk of committing acts of violence against Coalition and Iraqi Security Forces.”

This week’s events have proved just that.

Shirin Jaafair's reporting on Kataib Hezbollah was helped, in part, by our email network of veterans. If you are a veteran and want to be a part of this important group of people advising our coverage of military and defense issues, send an email to veterans@theworld.org.