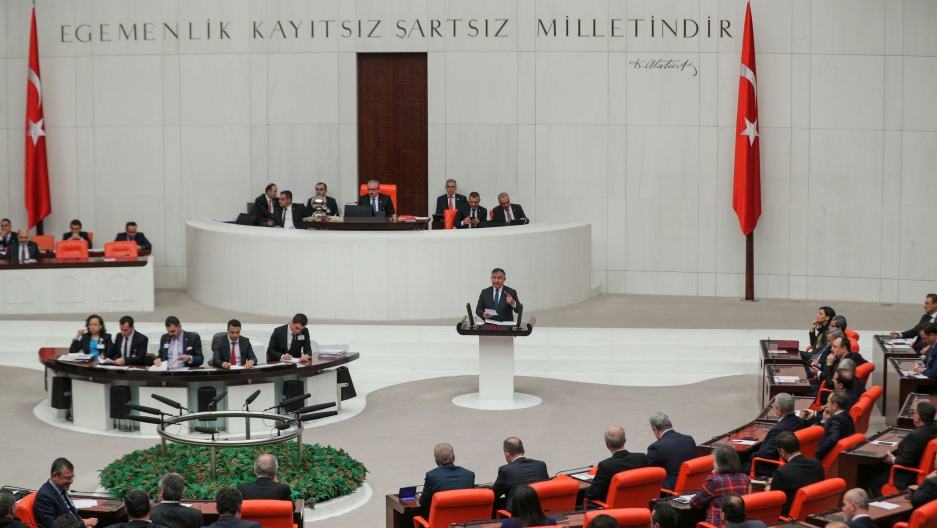 Ismet Yilmaz, head of the parliament's national defense committee from the ruling AK Party, addresses lawmakers at the Turkish parliament in Ankara, Jan. 2, 2020.

Turkey's parliament on Thursday overwhelmingly approved a bill that allows troop deployment in Libya, in a move that paves the way for further military cooperation between Ankara and Tripoli, but is unlikely to see boots on the ground immediately.

Libya is in the midst of a complex civil war. The government there controls the capital, but not much else.

The GNA last month requested Turkish support as it fends off an offensive by Gen. Khalifa Haftar's forces to the east of the country, which are backed by Russia, Egypt, the United Arab Emirates (UAE) and Jordan.

Related: Khalifa Haftar history in Libya and US before Tripoli invasion

The move comes after Ankara and the GNA signed two separate agreements in November: one on security and military cooperation and another on maritime boundaries in the eastern Mediterranean, a move that infuriated Greece, Israel, Egypt and Cyprus.

Almost immediately after the vote, Egypt's foreign ministry said it strongly condemned the parliament's decision, and called on the international community to urgently respond to the move.

The bill, opposed by all major opposition parties, passed with an 315-184 vote. Opposition parties said the move may exacerbate conflicts in Libya and endanger Turkish soldiers in the region and Turkey's national security.

But Erdoğan's spokesman Ibrahim Kalin said the bill was an important step for protecting Ankara's interests in North Africa and the Mediterranean, and for achieving peace and stability in Libya.

In a statement to Reuters, the GNA's interior minister, Fathi Bashagha, said Tripoli had requested Turkish support following a "dangerous escalation" in the conflict by Haftar's forces.

"As Libya's only legitimate and sovereign government, the GNA is the singular entity with the right to formalize military alliances necessary to safeguard our nation," Bashagha said, adding that the GNA aimed to stop a "war criminal" from seizing power and establish stability, security and democracy in Libya.

It's a dramatic move, but it's part of a pattern by Turkey to reach out more broadly to many parts of Africa. Ambassador David Shinn is America's former top envoy to Ethiopia and Burkina Faso. Shinn now teaches international relations at George Washington University and spoke to The World's Marco Werman about Turkey's dynamics in the region.

Marco Werman: Why does Turkey care about Libya?

David Shinn: I think it's more historical than anything else. The fact that Libya was once part of the Ottoman Empire. I think Libya is sort of going through a neo-Ottoman phase that sees a particular attachment to this part of the world. There may also be some interest in hydrocarbons in the wider region, and particularly in the case of Libya, there is an economic agreement between Turkey and Libya. This is with the Government of National Accord in Tripoli. President Erdoğan of Turkey would like to be sure to implement that economic agreement. And should the Government of National Accord fall, then that agreement will come to nothing.

So, what is in it for the Libyans, if it sounds like hydrocarbons are in the back of Erdoğan's mind?

I think the Government of National Accord is reaching out to whatever support it can get. And there aren't that many countries that are providing tangible support and particularly, military support for the government in Tripoli. There are actually more that are providing support to Gen. Haftar's regime, which operates out of the Benghazi area. So, I think that's really a question of national survival for the government in Tripoli.

Libya managed to get rid of Muammar Gaddafi in 2012, but it's basically been a mess ever since. Do you think Libyans will welcome the outside assistance if it does get their country stabilized?

I think Libyans would like to see stabilization. I'm not sure they care very much who does the stabilizing. But I think, as you say, it is a mess and they want to bring it to an end. Whoever can take control of the country and reestablish an element of stability would be welcome. But I'm not sure that there's any particular attachment to Turkey or any other power that's now engaged in Libya.

So, you mentioned, ambassador, the historic context for these Turkish troops going to Libya. Erdoğan does like to invoke the memory of that once-great Ottoman Empire. Do you think this is in some way an attempt to start rebuilding that empire or at least create the optics of one?

Well, it would be a question of rebuilding the optics of it. I don't think there's any thought of a reestablishing the Ottoman Empire with control over territory. But there is a desire to establish Turkish influence throughout the former Ottoman area, which covers, of course, all of North Africa and extends into parts of sub-Saharan Africa. As a result, you've seen a major effort by Erdoğan to reestablish Turkey's interests throughout all of Africa, including those parts that had nothing whatsoever to do with the Ottoman Empire.

A good indication of this is simply the fact that Turkey now has embassies in 42 of 54 of Africa's countries. That's an astounding number for an economy the size of Turkey. You look at what Erdoğan has done by way of visits since he became either prime minister or president. He has made 30 visits to Africa, which include 23 different African countries. This, too, is really quite unusual for for a country like Turkey.

So, what's behind all of this? What is Erdoğan thinking with his various embassies and representations across Africa?

Well, if if you were only looking at the former Ottoman area, I would say it was focused particularly on sort of the neo-Ottoman theme and reestablishing influence there. But because it goes well beyond that, I think it's an effort to establish not only political credibility, but have political influence in — and the political support of — as many countries as possible in forums like the United Nations, when it comes to issues like Cyprus, for example.

And there are 54 countries in Africa. That's a lot of potential votes if you can corral them all. So, I think Erdoğan is seeing Turkey as a major regional player and has aspirations to go beyond the region. And that's why you're seeing all of this activity.

Every relationship is a two-way street. So, what do these various African countries get out of their relationships with Turkey? Are promises being made?

Well, that's a good question. And I think this is where some of them probably are already becoming disappointed. You do have significant trade between Turkey and north African countries. That's been the case for several decades. You have very modest trade from Turkey with the sub-Saharan countries. You also have very modest aid programs from Turkey to Africa. So, in terms of getting something tangible out of it, it varies enormously country by country.

Turkey does have significant investments. And countries like Ethiopia, Sudan, some of the north African countries, they're very engaged politically in Somalia, and Somalia is one of the countries that's gaining enormously by Turkey's engagement there. Turkey is arguably the single most important, bilateral player in Somalia outside of Africa.

And what does that mean? What are they actually doing in this relationship with Somalia?

In addition to providing political support, they actually have a military facility in Mogadishu with a couple of hundred Turkish military personnel that can train up to 1,500 Somali national army personnel at any given time. This is a major investment. This is one of the countries that Erdoğan has visited on several occasions. Essentially, Turkey has sort of opened the door for Somalia. It's offering numerous scholarships to Somali nationals. And about half of all Turkish aid to Africa has gone to Somalia. So, the impact in Somalia is enormous. But Somalia is very much an exception.

So, establishing binational relationships is one thing. But actual boots on the ground? How unusual is it for Turkey to send troops overseas like they're doing in Libya?

I think it's very unusual with the exception of Somalia in Mogadishu where they're training, and that's a very different kind of engagement. Turkey also has a military facility in Qatar, probably larger than the one in Somalia. But the effort to put troops into Libya is a very different kind of thing. And I think Turkey's going to learn that this may be a more difficult situation than simply training Somali national army personnel in Mogadishu.

Libya has had so many different crevices and cracks involved in it that I really wonder how this is going to play out. Turkey has already sent some Syrians to Libya.

It has sent some military arms. It has, I understand it, some military advisers there. And it has sent an estimated 20 drones to Libya. It's interesting that these drones are, in effect, competing with Chinese drones that were provided by the United Arab Emirates to the the Haftar regime.

The Haftar regime on the one fighting the actual government of Libya.

Yes, exactly. And the Haftar government has the support of Egypt, Saudi Arabia, the United Arab Emirates and Russia. So, in effect, you have the Turks and Qatar lined up against all of these other forces in Libya. That strikes me as a rather dangerous situation for both Turkey and Qatar.