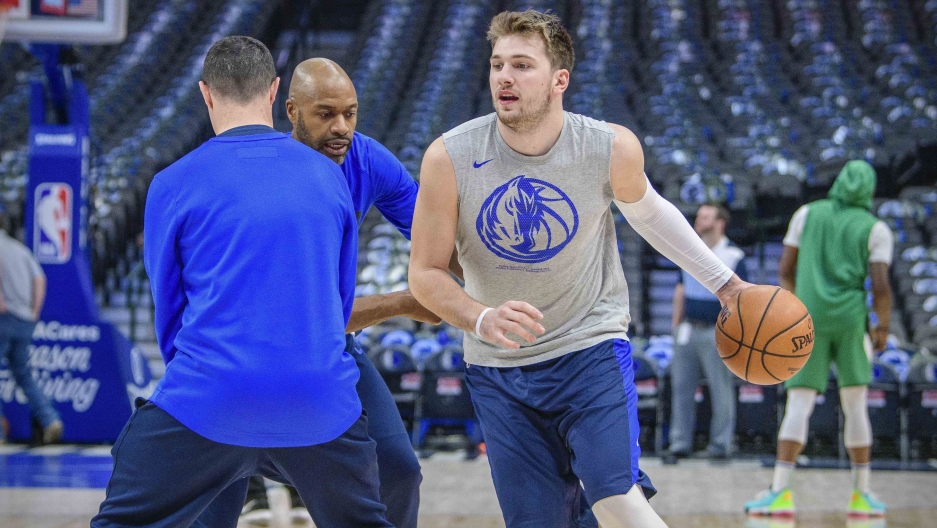 Dallas Mavericks forward Luka Dončić works out with trainers before the game between the Mavericks and the Boston Celtics at the American Airlines Center on Dec. 18, 2019.

The game hasn’t even tipped off yet, but there's already a crowd gathered to get a quick photo or an autograph when basketball’s latest messiah, Luka Dončić of the Dallas Mavericks, who steps onto the court at TD Garden for warm-ups in Boston.

There are signs in his honor, kids chanting “Luka,” adults using the kids as an excuse to get close to Dončić and others shameless enough to not even try to hide their intentions. Dončić is turning even the most green-blooded Celtics fans into screaming teenyboppers at a boy band concert. And the Mavs fans in attendance are in basketball heaven.

Related: Say you watched him when: Can Japan's best basketball player lead Gonzaga to a championship?

Jack Krzeminski is a 21-year-old Mavs fan who took a 2 1/2-hour train ride from Maine to see Dallas play in Boston in November.

“I followed Luka Dončić when he was on Real Madrid,” he said. “And when I saw they could get him in the draft … because a lot of people were really doubting him. I knew he was going to be really good. I thought he should have went No. 1.”

Dončić was the third pick in the 2018 draft.

Like many Mavericks fans, Krzeminski is all aboard the Dončić train.

In his first NBA season, Dončić averaged 21 points a game and won Rookie of the Year.

This year, Dončić is averaging nearly 30 points a game and is currently the league’s third-best player. He's also grabbing crazy rebounds and dishing out plenty of assists.

The young Slovenian already has some wondering whether he could be the best player in basketball and speculating about how far he can take the game.

The King of the NBA, LeBron James, has even heaped lavish praise on Dončić with colorful language.

Dončić, along with Kristaps Porziņģis, a Latvian superstar who Dallas acquired last season, are two of the biggest European names in the NBA. And they had Mavericks owner Mark Cuban reminiscing about another former Dallas duo when he spoke to reporters courtside before the Celtics game.

“In some respects, it’s like Steve Nash and Dirk [Nowitzki] when they first got here and were young and learned to play together and pushed each other,” he said. “And hopefully, we can replicate their success.”

That’s high praise. German big man Nowitzki is a legend in Dallas and widely considered the greatest European player of all time.

The 7-foot German led Dallas to its only championship back in 2011. And now, the expectations are already building for Dončić to follow in his footsteps.

“[The Mavericks are] a very international-facing organization that does spend a lot of time overseas, scouting overseas, looking at players from, you know, other countries because they have seen that as, you know, somewhere that they can get a leg up on other teams,” said Tim Cato, a reporter who covers the Mavs for The Athletic, a sports website.

Cato went to Slovenia to report on how Dončić’s home country is responding to the rapid rise of the NBA’s next potential leading man. Dončić’s ascension is about much more than sports.

Cato says that while Slovenia — which broke away from Yugoslavia in 1991 — is small, and young, its people have an immense amount of pride and they seek validation for their country on the world stage.

“Even the nonbasketball fans, you know, are just as supportive of him because … He’s the one who’s getting the pride of their country out into the world.”

“The way they do that is through their athletes. They see that path through their athletes because they know that those are the individuals that can go and win global recognition and become global superstars … with the way Luka has risen into global superstardom, they have all rallied around him,” he said. “Even the nonbasketball fans, you know, are just as supportive of him because … he’s the one who’s getting the pride of their country out into the world.”

Related: Former NBA star Dikembe Mutombo is on a mission to beat Ebola in DR Congo

As a child, Dončić was a basketball prodigy. His father played professional basketball in Slovenia, and Dončić signed a contract with Real Madrid’s basketball club when he was only 13.

Now, he's on the biggest stage of the basketball world.

During the Boston game, Dončić moves with grace and precision, whipping no-look passes like a four-star chef showing off his knife skills. Whenever Dončić has the ball in his hands, the arena’s just a little quieter — if you’re not paying attention, you might miss out on something awe-inspiring.

Dončić puts up 34 points — great by anyone’s standards, but common for him now.

In the hot and stuffy visitors’ locker room after the game, Dončić is soft-spoken around the gaggle of reporters who have waited to see him.

The interactions are mostly the usual postgame boilerplate questions. There are also Slovenian reporters following him around, and Dončić interacts with them in his native tongue.

Dončić looks like he's ready to go home — he's the last one in the locker room.

After a few minutes, the Mavs public relations team shepherds him out. There’s no time to go into deeper questions about him possibly being the next great European ballplayer. On this night, it’s all about the game.

And that seems fair. Dončić is only 20 years old. But he navigates the game and everything that comes with it with an elegance of someone much older. And he’s doing it all while carrying the pride of a small, European country on his back.