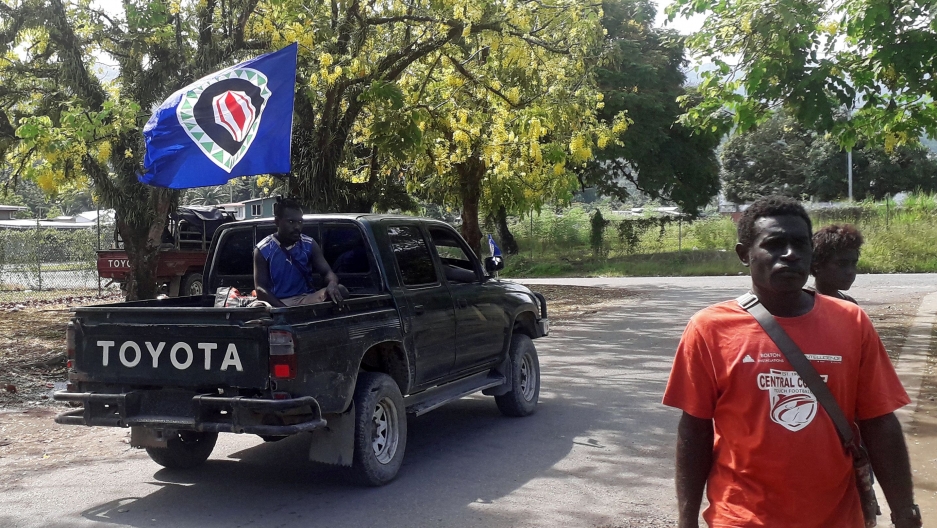 A vehicle flying a Bougainville flag drives by during a non-binding independence referendum in Arawa on the Papua New Guinea island of Bougainville, on Nov. 26, 2019.

The South Pacific islands of Bougainville have overwhelmingly voted to be independent from Papua New Guinea in a historic poll on Dec. 11 that has emboldened separatists as they start negotiating the terms of their sovereignty.

Almost 98% of the 181,067 votes backed independence in the non-binding poll last month that is part of a peace pact struck in the aftermath of a decade-long war between Bougainville’s rebel fighters and PNG forces, which ended in 1998.

As the world waits to see what the future has in store of Bougainville, our host Marco Werman spoke with Shane McLeod, a research fellow at the Lowy Institute in Syndey, Australia who specializes in the history of Papua New Guinea.

Marco Werman: So, what is Bougainville in the first place? Why was it autonomous from Papua New Guinea?

Shane McLeod: It's a province within Papua New Guinea, but it was given special status as part of a peace agreement in 2001, which ended a pretty vicious and violent conflict that had been going on in Bougainville for about 15 years or so. It started with a dispute over a large mine that was operating on Bougainville, but it became a much more intractable conflict and led to clashes between different groups in Bougainville and also with the national government, military and police. So, as part of that peace agreement, Bougainville got special status and has since that time been preparing for this referendum.

How have they been preparing for this referendum? What's been happening since the peace agreement?

The peace agreement made provision for this referendum. It was one of the key sticking points. The Bougainvilleans really wanted to have their say and be given the opportunity to vote for independence but Papua New Guinea didn't want that vote to happen immediately. So, that was the compromise ... and it would take place within 20 years after the new government was established. And that's where we've landed with the result this week.

So what does this vote actually mean? Does the world now have its latest sovereign country?

Not yet, it's not a binding outcome. And that was, again, part of the peace agreement. The provisions that were agreed is that PNG's national parliament would get the final say and would have to ratify and respond to the outcome of the vote. Some Bougainvilleans were frustrated by that, but others and some fairly senior leaders have pointed out that they wanted that opportunity to negotiate and deal wit in an orderly way and not just have a cut-off point where Bougainville would be cut off from the rest of PNG. Given the scale of the outcome, PNG's government doesn't really have the capacity to interpret this vote another way. There's not really any sense that there's a large group of people on Bougainville who want to remain as part of PNG. I think that just means that independence has to be happening, there has to be a timeline for that.

Is there any reason Papua New Guinea would push back on this vote and kind of drag its heels on independence for Bougainville?

I think it would be hard for PNG to do that at this point. It has been a really well scrutinized process. There have been independent observers throughout the process. It ran really smoothly. There really weren't any issues at all during the conduct of the vote itself. There doesn't seem to be any questions raised about the counting process or the nature of the voting. I think just the scale of the outcome means that it's pretty hard for anyone to argue those problems. I mean, it's such a overwhelming majority and probably if you go back in history and think about what the outcome might have been had this vote happened when the peace agreement was signed back in 2001, it might not have even been at this scale. It shows that in those years since, more Bougainvillean people who perhaps 15 or 20 years ago would have been more inclined towards staying within PNG now see their future lies outside PNG.

Bougainville is not a large population physically — it's a small island. What are the resources the people of Bougainville could tap into and are they even ready for independence?

Yeah, one of the big challenges for Bougainville is economic prospects. It can barely support what it has now in terms of its special autonomous government. It's going to need resources to make itself viable and it's going to be relying on international partners to get there once it is able to negotiate this process with PNG. It has the mineral resources, the mine that really sparked the conflict back in the late 80's, Panguna, has still got some substantial mineral resources. There could be some effort to get that mine operating again and a lot of people think that Bougainville's economic future will really depend on mining. There are other prospects within Bougainville as well. Things like fisheries could be a big industry. But it's going to be very tricky. The population will be smaller than some of the other neighboring nations in Melanesia like Vanuatu or the Solomon Islands and it's starting from a base where a lot of its infrastructure and a lot of the things it will need just don't exist yet.

What do Bougainvilleans actually identify around? What are some of the cultural icons that could unify a future nation?

Well, there is the outcome of the conflict, and for what the people of Bougainville have been through, this peace process has been a real tribute to their patience and their persistence in getting through this. People have written a bit about Bougainvillean identity — it's something that came about as a result of European colonisation, and, through a couple of centuries of colonization, that has really created this idea of Bougainville as a unified unit. Before that, it was really tribal and down at the small regional groupings and clan-based. It's really only been since Europeans came in and imposed colonialism on Bougainville that that idea of Bougainville as a unit has been created. But it is something that's quite distinct now. Bougainvilleans tend to have skin that's much darker than people from other parts of Papua New Guinea and Melanesia. It's something quite visible for a lot of Bouganvillenas, [though] not all. But it does provide a sense of unity and identity for a lot of Bougainvilleans. Also some of the traditions, things like matrilineal land tenure that applies in a lot of Bougainville means that people have a sense of culture that I think will drive that sense of identity as an independent nation.