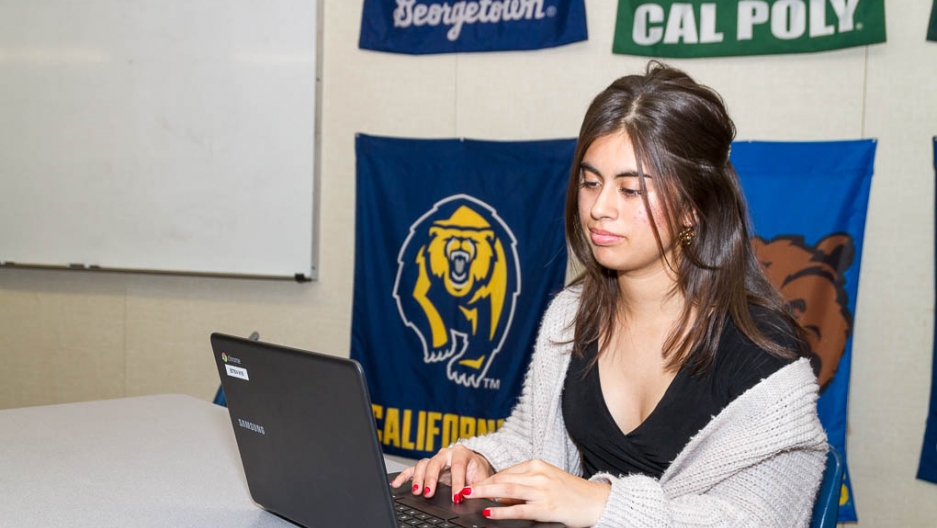 If all goes as planned Daniela Cortez, 17, will be  the first in her family to attend a four-year university next fall. But this year, she first has to get through the college application process.

Seventeen-year-old Daniela Cortez spent many afternoons this fall in a classroom in San Jose, California, writing and revising her college application essays and learning how to read tax forms so she could apply for financial aid. If all goes as planned, next fall she will become the first in her family to enroll in a four-year university.

She eventually wants to become a lawyer. But first, she needs to get admitted to college — which doesn’t feel like a guarantee.

“We understand that we're competing in a game that isn't set up for everybody fairly when it comes to applying for college,” said Cortez, a senior at San Jose's Andrew Hill High School, where over half the student body is Latino and most of the rest are Vietnamese. The majority of students come from low-income households.

Cortez is one of 831,000 Latino students projected to graduate from US high schools in 2020. Although the percentage of Latinos going to college is increasing, they continue to face hurdles — from knowing which institutions to enroll in to navigating the complexities of financial aid. According to the latest data from the federal government, only 35% of Latinos aged 18 to 24 are enrolled in college, compared to 41% of whites and 65% of Asians.

Latino students “oftentimes do not have access to resources or college knowledge to navigate these spaces,” said Emily Labandera, a policy and research analyst for Excelencia in Education, a Washington, DC, group that works to improve Latino success in higher education.

This year, college access became even more fraught as news broke about a scheme where wealthy parents essentially bought heir children’s entry into elite universities. Meanwhile, a federal court ruled in favor of Harvard University in a yearslong battle over whether its affirmative action policies harmed Asian American applicants.

High school seniors like Cortez are pushing through with college applications even as the admissions scandal and legal battle around affirmative action lay bare the inequities embedded into the United States’ higher education system.

For Cortez, getting support through a unique program that helps guide low-income, potential first-generation college students through college admissions has been a lifeline.

Cortez said she is not likely to get advice about college from her parents, immigrants from Mexico who work in blue-collar jobs. Her father works as a landscaper; her mother is a stay-at-home parent who sometimes works in childcare. Both always told her that doing well in school would be the path to a better life, but it was unclear to them the amount of work it takes.

It’s resulted in some conflicts at home, Cortez said.

Her mother’s education ended after high school. Her father only completed middle school. But middle school is when opportunities for Cortez began. When she was in sixth grade, she was invited to a presentation by the nonprofit Breakthrough Silicon Valley, which provides mentoring and tutoring to nearly 600 low-income middle and high school students.

There, Cortez remembers being told, “‘You deserve to go to college, and you deserve to fight for a place in college.’”

Cortez joined Breakthrough at age 11. That may sound early, but experts say it's critical to start thinking about the college application process long before high school.

“A lot of efforts to educate and inform and empower the Latino community or the Vietnamese community start in high school,” said Breakthrough Silicon Valley CEO John Hiester, referring to the majority of students they serve. “In our experience, that's really far down the road, actually.”

For the past six years, the program has guided Cortez through middle school and high school, all the way to the college application process.

Last spring, just as Cortez was deciding which universities to apply to, the college admissions scandal broke. Federal authorities accused dozens of wealthy parents of paying to have their kids pose as elite athletes, falsifying SAT scores, or giving five-figure donations that opened up the “side door” to these institutions.

It made Cortez think about how college admissions officers would view her compared to wealthier kids who have access to more resources. She knows she has pushed herself over the past six years. She volunteers for UNICEF, participates in school theater, feeds the homeless with her church. Next spring, Cortez will graduate with both a high school diploma and an International Baccalaureate degree for advanced classes.

“I would take a look around and I felt intimidated because I'm the only Latino student there,” Cortez said, thinking back to the experience. “The start of my first practice test, I felt ashamed because I wasn't paying for that help.”

That kind of tutoring usually costs over $1,000, which may be one of the reasons why Latino students overall score lower on standardized college aptitude tests, such as the SAT and ACT, which have been accused of being biased in favor white and wealthier students. Students and advocacy groups sued the University of California sued earlier this month claiming that the tests are biased and unconstitutional.

By the end of the year, Cortez will have completed all of her college applications. Among them is an application for Columbia University to major in political science—a point of tension with her parents.

“They don't understand,” she said, recalling her mother’s reaction. “'Why does my child need to do this? Go live in New York to get a degree that you can get at San Jose State, or you could just go to community college'."

The majority of Latino college students do choose community college. 41% are enrolled in a two-year college, as opposed to only 25% in four-year. This is the opposite of white students, who tend to choose four-year colleges over two-year programs. In Cortez’s family, like many in her community, it’s not a rite of passage for 18-year-olds to move away and attend college.

Community colleges are also more affordable, and students can often hold a job. But that path has its pitfalls. In order to transfer to a four-year campus, students need to be laser-focused on fulfilling their basic requirements, often without much academic counseling or room to explore majors. Then there is the challenge of attending college, while the other parts of their life stay the same.

“A lot of the students I've seen go there from Breakthrough will continue to maybe work in the same jobs they work in high school when they're at a two-year and commit more time to work than to their academics,” said Hiester.

Cortez has seen that happen. Her older sister also had dreams of becoming an attorney and enrolled in community college. But she had to drop out when she could no longer afford classes. Now she is a single mother working at a Tesla plant.

“Realizing how difficult it was for her, it made me fearful,” she admits. “But I also felt like I had a step up, you know? Maybe I can make my sister's dream a reality, but it is incredibly, incredibly difficult.”

Cortez is applying to a range of four-year universities, including several local Jesuit colleges, along with UCLA and other California public universities. In October, a federal judge ruled that Harvard University didn’t discriminate against Asian Americans in its limited consideration of race in admissions. Several states, including California, have already banned the use of race as a factor in deciding who gets accepted. Yet there is a lingering suspicion that colleges reserve spaces for underrepresented minorities.

That assumption that colleges hold Latinos to lower standards makes Cortez self-conscious. She doesn’t fault the unnamed Asian American students who signed onto the lawsuit, but she bristles when describing the time when one of her friends--who is also Latino--suggested that she will have a better chance of getting into UC Berkeley.

She recalls, “He believes that I'm going to get accepted because I am Latina.” When those acceptance letters do start coming in, Cortez hopes it is because of her accomplishments and her potential—not her race.

Cortez is aware of the nuanced role that race plays in the college admissions process. The aspiring lawyer understands that Supreme Court cases have ruled that colleges can only use race as a factor within a factor, and that federal law bars them from reserving quotas for certain groups. And yet she still suspects that an applicant’s race matters more than colleges admit.

Yet she also worries about the impact that athletes and legacies have on a limited number of spaces in a college’s freshman class.

“What if at the end of the day, all of the effort that I put in isn’t going to be enough?” she said.

Even before the admissions letters start arriving, Cortez knows that she has at least convinced one person that she’s capable of college.