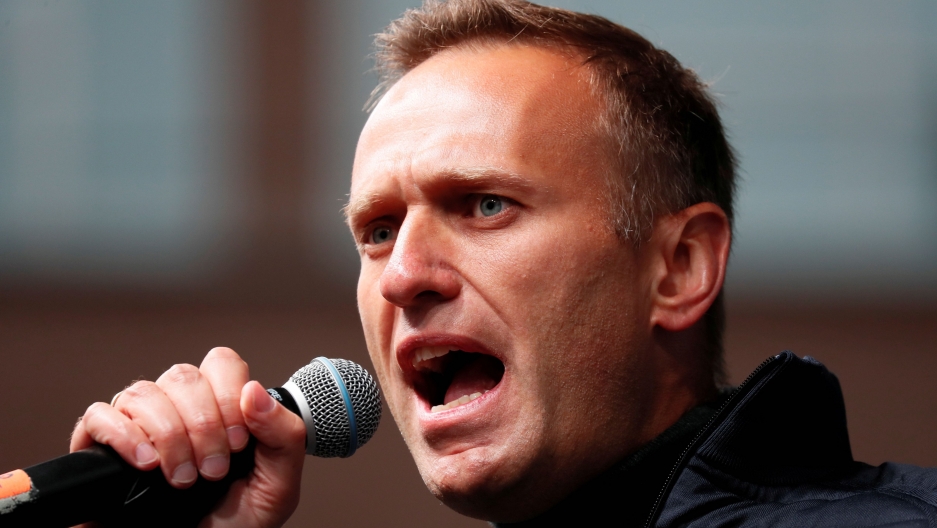 Russian opposition leader Alexei Navalny delivers a speech during a rally to demand the release of jailed protesters, who were detained during opposition demonstrations for fair elections, in Moscow, Sept. 29, 2019.

The Kremlin is busy sharpening its tools to silence opponents of President Vladimir Putin. It recently tested out Russia's countrywide alternative to the global internet.

This week, police also raided the office of Moscow's most well-known opposition figure, Alexei Navalny, and his team.

On top of that, one of Navalny's close allies, Ruslan Shaveddinov, was forcibly conscripted into the army.

Nikita Kulachenkov knows Shaveddinov from his own work with Navalny's group, the Anti-Corruption Foundation. Kulachenkov spoke to The World's host Marco Werman from Berlin.

"They cannot take [you] forcefully to the army. There is no such legal way to do that. And this is why this is so unusual — because it's just something not within the law."

"They cannot take [you] forcefully to the army. There is no such legal way to do that. And this is why this is so unusual — because it's just something not within the law. And it's so cynically taken to the place where there is no communication, and as far as we know, there is no civil transport or civil service to this place," Kulachenkov said. "So, journalists won't be able to get there. Lawyers won't be able to get there unless they got the seats in the military plane."

Related: In Russia, individuals can now be branded 'foreign agents'

Marco Werman: So, this is a relatively new tactic by the Kremlin. What concerns you most about it?

Nikita Kulachenkov: Well, because it's actually a prison sentence for one year for the person because he would be in the Arctic. He won't be able to leave. And at the same time, he has medical conditions that prevent him from serving in the army. And so, it's something extraordinary — it's like arrest or detention.

You're in Berlin. You're actually wanted in Russia by the FSB, the domestic security forces. Why are you willing to take these risks, continuing to do this work on behalf of Putin's opposition?

It was almost like seven or six years ago when I, at one point, thought that I'm not going to be in the corporate environment anymore and I'm going to do something for my country. And I chose to work for Alexei. And I came to him and said that I'm an investigator, I can work in your team and I think I can help you. And he said OK. And so I joined the Anti-Corruption Foundation.

So, I was watching Alexei Navalny crack jokes with his colleagues and make light of the raid while it was happening. I'm sure you haven't lost your sense of Russian humor? But I mean, how are you able to do that? And in Berlin? Do you still see the humor in all this?

Well, if you are in Berlin, it's easy to see jokes in that because you don't have that risk that your computer will be stolen by the police officers. You get used to it. I think half of our employees were at least interrogated or detained once, and some of them spent several months in total in these short detentions.

Still nothing funny about detention. So, what we're looking at here at the end of 2019 is the Kremlin staging a number of schemes to silence the opposition in Russia. What's next for FBK, the Anti-Corruption Foundation?

So, we implemented this bold, smart tactic and smart, bold system this year and it was successful. We say, "Here are the candidates that are not linked to United Russia, the pro-government party." So, we expect that we're going to use the same tactic and this smart, old system in 2021, in the State Duma elections.