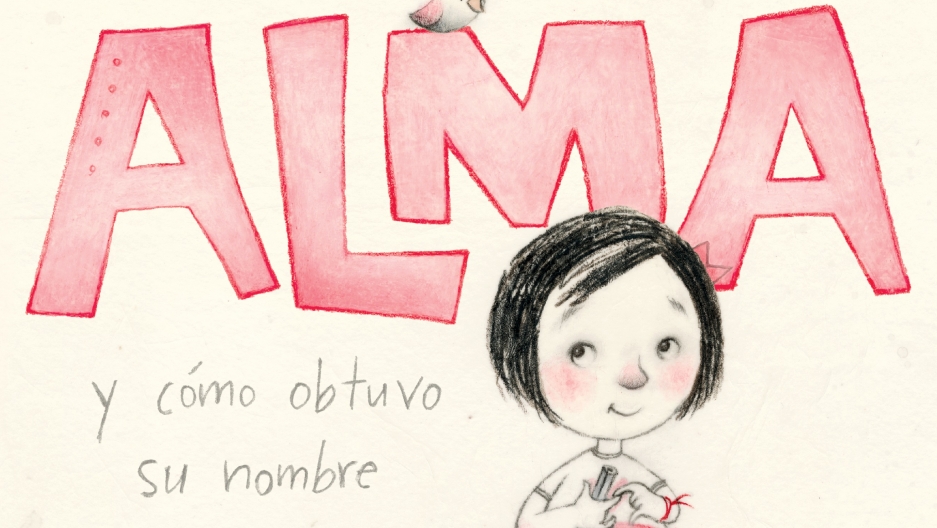 "Alma and How She Got Her Name," by Peruvian-American author Juana Martinez-Neal.

Children's books about immigration, identity and what it means to be a new American have become increasingly popular.

By 2018, there were more than 100 such books with themes including migrating through the eyes of a child, navigating a new language and culture, and a book about life when your father is being held in an immigrant detention center.

This past year, "Alma and How She Got Her Name" won a Randolph Caldecott Medal, which recognizes the preceding year's "most distinguished American picture book for children." The book explores themes of identity, heritage, and the meaning behind names.

Peruvian-American author and illustrator, Juana Martinez-Neal, spoke with our host, Marco Werman, about what the story means to her.

Marco Werman: Slowly but surely, Alma has her name story revealed to her by her dad. So what is Alma's story? Who is Alma? Does she actually exist?

Juana Martinez-Neal: I would say its semi-autobiographical. It's started with the idea of my name and how I was named, and then slowly changed into the story of Alma. Even though the relatives [in the story] are my relatives in real life, it was easier for me to use the story of Alma. I was able to tell this story once I wasn't telling the story of my own name, and I got those little licenses, I added more names.

The book begins with Alma pretty frustrated by the length of her name. Did you have the same kind of feeling when you were a kid?

My name wasn't as long, although it was very Spanish and it was very old-fashioned, My name was Juana Carlotta Martinez Pissaro and in Peru you carry both your father's last name and your mother's last name. So Martinez is my dad's and Pissarro comes from my mom. And then Juana is my name. I was named after my father's mother, my grandmother, and then Carla was changed to Carlotta. My dad changed [it] at the last minute when he was writing my name in the birth certificate, but Carlotta translates to Charlotte and then both [names] together are so old-fashioned and everything was just so, so very Spanish. I did not like my name at all.

There is so much wrapped up in one's name. I was watching this moment on the Netflix show, "Patriot Act," the talk show with comedian Hasan Minhaj, and he revealed this part of his story ... There is this sense that the first generation arrivals wanted a clearer belief that their offspring were truly American, even though his parents named him Hassan. So when you wrote this kid's book, were those kinds of tensions on your mind?

No, not really. I mean, I think I wanted to go even more into my roots and my own story of being an immigrant from Peru. It was very important to me to make it as authentic as I could, as Spanish as I could. It was so important for me to have names that not only were Spanish, but could have a translation like Esperanza, which means hope and Alma, which means soul. And Sofia, there is a softness to it that carries on to the character. The names that I picked for the story were very, very carefully chosen, [like] Candela, which means fire. It was just so important to pick the right names for each one of these characters and they need it to be Spanish. I'm an immigrant of the US, but I'm very proud of my background and where I came from.

Yeah, it's about pride, isn't it? Same with Hassan Minhaj, why he kept Hassan, and in your book, Alma, is fine with her name. They're just too many of them. But in the end, she's proud of her name, too. There are now dozens of books about immigration and what it means to be a new American. What do you think is inspiring this wave of books?

I don't know if it's just any one thing. Maybe it's just that we are getting to more of a place where we get a chance to be published. That's a wonderful thing because being American means so many different things, right? And we're just telling one other story of how it is or what it means to be an American.

I gather your story of Alma did evolve since you first came up with the idea, like after the 2016 election. Didn't you alter some of the storyline?

I did — the character of Candela, which is based on my mom's mom. She was such an important part of my life and really defined who I was. At the beginning, I kind of took an easy way out and told the story of my grandmother as an entrepreneur. But it's not until the results of the election of 2016 that I said, "Well, I really need to revise these and go back to the essence of who my grandma was," even though the wording [of the story] changed and it's the shorter one in the whole story because I thought illustrations would tell more than my actual words. It says, "Candela was your other grandmother, and she always stood up for what was right." And she's standing and walking with people. And then the following one is even shorter, it says, "I am Candela." So, yes, it did change. I thought it was very important for me to show her as more of a person in charge of her own destiny.

And let's remember that "Alma and How She Got Her Name" is a children's book. How important are these themes of immigration and identity for children to learn about?

Tell me about the illustrators whom you admire and who left a mark on you.

Well, when I was starting to think about doing children's illustration, there were two who I really loved. They were Rafael Lopez and Judy Morales. The main reason why I love their work is because their characters looked like what I looked like, and what I hope to do. They made me see that there was a place in children's books for the work I was hoping to do with people who look like me.

Related:  US immigration system is full of hurdles for pregnant women and new mothers

You've got children, have you talked to them about their names?

Are those long stories or are they going to come out someday?

We have three children and each one has two names and one is a new name because we want them to make that name just like Alma and do whatever they want to do with their story. And then the second name, the middle name, is always carried from a great-grandfather or a grandfather.

Was there a part of you that wanted to give your kids a lot of names?

I never thought of it. I'm used to two names. And this was before Alma was written. Maybe if I had one now I would, I don't know.