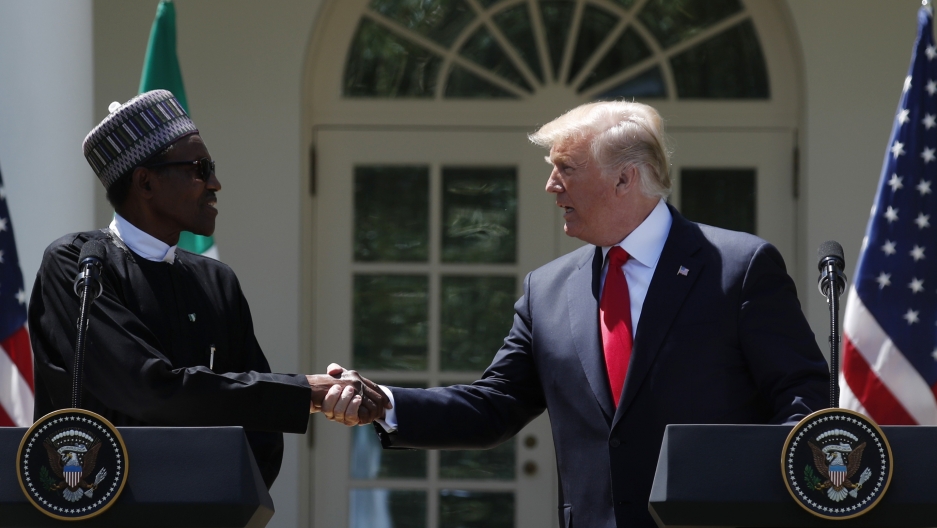 US President Donald Trump greets Nigeria's President Muhammadu Buhari during a joint news conference in the Rose Garden of the White House in Washington, US, on April 30, 2018.

According to a recent Pew Research Center poll, US President Donald Trump is historically unpopular in many countries around the globe, particularly among residents of US allies. There are exceptions, however — including Nigeria.

Many Nigerians weren't put out when Trump referred to sub-Saharan nations as "s"*hole countries" and reportedly described their leader — Nigerian President Muhammadu Buhari — as "lifeless." Impeachment doesn't bother many of Trump's supporters, either.

To find out why Trump has so many fans and gets so many free passes in Nigeria, our host, Carol Hills, reached out to writer and journalist Adaobi Tricia Nwaubani. She's based in Abuja and her latest novel is “Buried Beneath the Baobab Tree.”

Carol Hills: Christianity Today, which is a leading evangelical magazine launched by televangelist Billy Graham, ran an editorial calling President Trump "morally lost and confused" and arguing that he should be removed from office. Has Trump's behavior raised eyebrows with Nigerian evangelicals?

Adaobi Tricia Nwaubani: The important thing to remember is that Christians in Nigeria — and, I would imagine, around the world — don't necessarily support President Trump because he's a good person ... When you hear him being discussed, it's with admiration most of the time. People admire his tough guy image and his bluntness is entertaining. He's weird to Americans. He's strange. He's different from what you've had. But we're used to leaders who speak without restraint, who are verbally abusive when they please. And so he's not as outlandish to us as he may appear to an American.

We're a deeply religious country and some of his policies are considered favorable to, really, just people ... They feel he's an instrument being used by God. People make references to people in the Bible, like Nebuchadnezzar or Pharaoh, who were instruments, who were used by God to do different things or elevate God's people...to push what they felt was God's agenda, even when they were not necessarily good men. So, people tend to agree he is not the nicest person, he's not the most righteous human being. But they believe that he's an instrument in God's hands to push God's agenda in this time. President Obama, among Nigerian Christians, wasn't particularly popular. I've heard people refer to him as the Antichrist because of his policies, never mind that at least on the surface, he appears to be a good man.

What is it about what Trump is doing that is God's agenda, according to that view?

Obviously, abortion and gay rights ... I've listened to people [speak about] end-time eschatology — about the end times and prophecies about the things that will happen in the end times — and they feel that the things Trump is doing, beyond things like abortion and gay rights, in terms of bringing about the event that will, according to prophecies in the religious books, that he seems to be the person that is putting things in place and pushing things, preparing the stage for the ... prophecies, the predictions for the end times. I've heard those deep conversations — people feeling that Trump is an instrument in arranging world affairs so that the stage is set for the prophecies and predictions for the end time.

Nigeria's president, Muhammadu Buhari, was the first leader of a sub-Saharan country to visit Trump in the White House. That was in April, 2018. And afterward, Trump reportedly described him as "lifeless." Was there any blowback after that comment?

The opposition used it as a weapon. We had our general elections in February and we had more than 70 candidates who wanted to get President Buhari out of that seat. And all of them used that "lifeless" comment. They used it to describe his performance in the economy, used it to describe his health issues, which have been well-publicized; he has spent a number of months in hospital abroad. So people used that "lifelessness" comment to describe the government of President Buhari. But of course, it didn't work. He's back in power ... Remember that the majority of his supporters are people in the rural areas of certain parts of Nigeria who don't have access to social media and who don't know what Trump thinks or says about President Buhari. So he still won.

What about the impeachment news in the US this week? Has that appeared in Nigerian headlines this week?

It has been in the headlines because, of course, everybody follows the news in America. And, again, it hasn't necessarily dented his support here because people are convinced that it's his enemies at work. We live in a part of the world where once you hear the word "impeachment," it's obviously an attack by one's political opponent. So, it's entertaining for Nigerians, but I don't think it will necessarily dent his image in this part of the world. And that's the way it's being viewed — that his enemies are against him and they are throwing what they believe is their best weapon.

So, when somebody like me reads the results of the Pew poll, are we fundamentally misreading what this is really about? Because you keep saying it's all about internal politics in Nigeria; it's not really about Trump. Do Nigerians like Trump or not?

My understanding is they do. But remember that they're not reading every single thing. They're not following every single thing he's doing. The general things that come out — we sit down and we laugh: "Oh, look at what he said, look at what he's done." So the impression you get when you sit down casually with people is that they do like him. People like his tough guy image. People are impressed by how he consistently rises above his challenges, defeats his enemies. You know, it's impressive ... Remember, there are millions of people in Nigeria — over 200 million people. There are actually people to whom none of this matters. But to the Nigerians who are aware of what's going on in the world, Trump appears to be popular. They find him amusing more than anything else — more amusing than disgusting. And that's really the way it is.