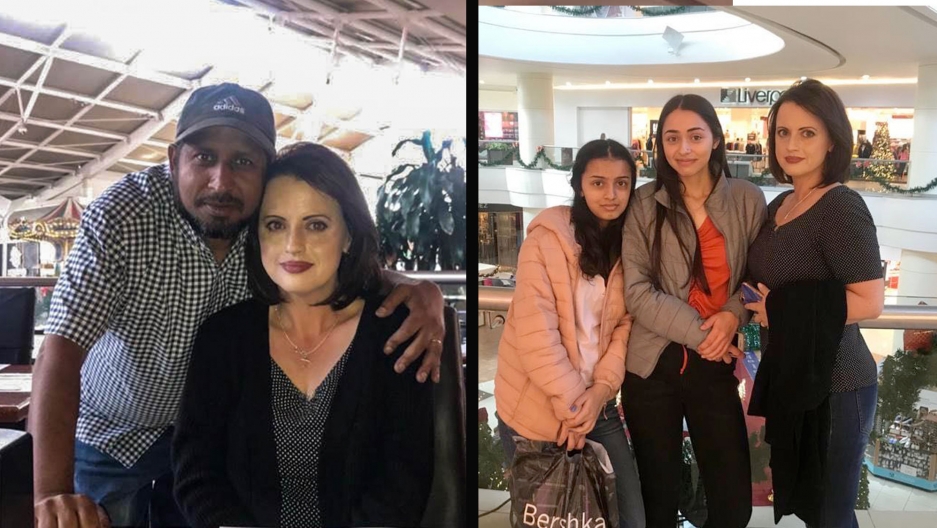 Left: Kristen Agrawal and her husband, Bimal Agrawal, pose in a shopping center in Morelia, Mexico, where he lives with their two daughters after facing deportation from the US. Right: (left to right) Kalyani and Maniya Agrawal with their mother.

Kristen Agrawal counted down the days before she flew to Morelia, Mexico, on Dec. 18, to spend the holidays with her husband and their two teenage daughters. She carefully planned an itinerary for Christmas week.

“We are going to go to the celebration of the Virgin of Guadeloupe and the eternal town of Christmas,” she said of Tlalpujahua, a town known for producing artisan Christmas tree ornaments year-round. “I want to go to all the bakeries and try every single Christmas pastry.”

Agrawal’s family eventually made Mexico their home after Agrawal’s husband, Bimal Agrawal, was detained by Immigration and Customs Enforcement (ICE) officers in 2017. A Nepalese immigrant who came to the US on a student visa at age 18, Bimal became a victim of immigration lawyer fraud while seeking legal permanent residency and was never able to adjust his status.

Rather than fight ICE, the family first made the heart-wrenching decision for Bimal to self-deport to Nepal, and his wife and daughters followed. But after a few months, they realized Nepal was not a viable option. “We were completely unprepared,” Kristen Agrawal said. The family began to consider other options.

A few months later, Agrawal realized that her family could emigrate to Mexico, — only a three-hour flight from their former home in Tulsa, Oklahoma. The family jumped at the chance to move to Morelia, a small city in the state of Michoacán, and a relative oasis from some of the cartel violence in the surrounding provinces. Bimal Agrawal and his daughters moved to Mexico in 2018.

And while Agrawal still spends most of her time in Tulsa, working as a hospice nurse to support her family, she is saving money to join her husband and two daughters in Mexico permanently.

This will be their first Christmas together in Mexico. “I want to see what our life might be like when I move there,” she said.

It’s unclear how many US citizens have been separated from a partner who has been deported, or how many have left the United States to live abroad with partners who have been ordered deported or denied US visas.

“We know that there are about 100,000 immigrant visas denied every year, and about 20% of all visa applications are to join US citizen spouses,” said Randall Emery, the president of the American Families United, an organization that advocates for US citizens married to individuals experiencing immigration problems.

“If this ratio applies to the number of people who have been turned away, that is 20,000 per year,” Emery said, referring to the State Department data on visa rejections.

Related: He was deported twice. This third time, his family is leaving with him.

The US deported 230,982 people in 2018, down from its peak of 407,821 in 2012 under then-President Barack Obama. The vast majority of deportees have always been men: 92% in 2018, according to the Transactional Records Access Clearinghouse (TRAC), a University of Syracuse-based research organization. For this reason, spouses left behind in the US tend to be women.

For mothers supporting large families in the US, traveling to Mexico or other countries to spend the holidays with their deported husbands is often financially impossible.

“I have two jobs, and even that isn’t enough to go out and spend the holidays with my husband in Mexico,” said Cecilia Garcia, a US citizen and mother of five in Chicago, Illinois. “If I could, I would be there in a heartbeat.”

This year, they will spend their seventh Christmas without her husband and their children’s father, Hugo González Velasco, who was deported and now lives in Tijuana. Garcia traveled to Tijuana this past summer, but her daughters haven’t seen him since 2018, and her sons since 2015.

“It makes you feel like an incompetent parent. My daughter told me she doesn’t want any toys. She just wants her dad. I can get her that hot new toy — but I can’t bring her dad home for Christmas.”

“It makes you feel like an incompetent parent,” she said. “My daughter told me she doesn’t want any toys. She just wants her dad. I can get her that hot new toy — but I can’t bring her dad home for Christmas.”

Seven years ago, Garcia’s world turned upside down when Velasco was pulled over for driving with expired vehicle license plates. She thought he was protected from deportation. Even though he was undocumented, she had applied for an immigration waiver to adjust his status and put him on a path to getting a green card through marriage. 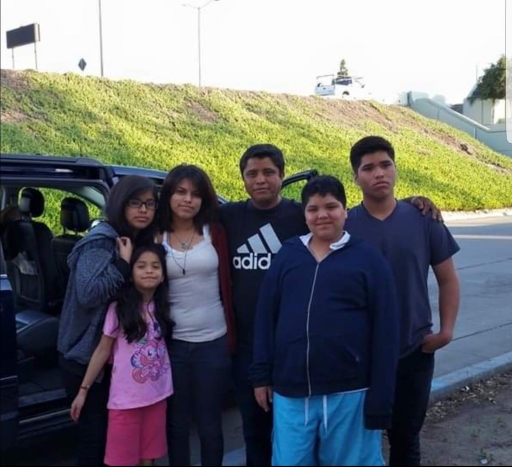 Hugo González Velasco, center, poses with his children in Tijuana in 2015. That was the last time the children saw their father all together.

However, under the 1996 Illegal Immigration Reform and Immigration Responsibility Act (IRAIRA), undocumented immigrants who entered the country illegally must first go to their home country before they can reapply to join their spouses legally in the US. Depending on how long they lived in the US without legal status, they could be barred from entering for up to ten years.

The police who pulled over Velasco called ICE, Garcia said. He was put in deportation proceedings and told that he had a ten-year ban on reentering the United States.

“I thought he was protected because I was fixing his papers,” she said. “It’s been seven years, and I’m still trying to fix his papers.”

Related: Americans’ immigration emergency: Their spouses can be deported if they seek green cards.

Garcia has become an advocate for US citizens separated by the immigration system, founding an organization called Family Reunification Not Deportation that organizes other impacted families to lobby local and state politicians to abolish the 1996 legislation and create fairer policies for families of mixed immigration status. She routinely posts in Facebook groups for women who are fighting deportations or traveling to Mexico to be with their deported spouses, offering practical advice and support.

“People tell me, you should be focused on your husband and your family,” she said. “But if I get my husband home, how can I be happy if I know my neighbor’s kids are crying next door?”

Nevertheless, Garcia still gathers her family at her home every Christmas. She is preparing to host a multigenerational family dinner next week.

“Around midnight, we video chat my hubby,” she continued. “We always FaceTime daddy for presents.”

The feeling of sadness and loss is familiar to many families struggling with deported parents and spouses. For Kristen Agrawal, it hit her while she was on her way to spend Thanksgiving with her sister, after not seeing her husband or daughters for three months.

“I couldn’t deal with the 20 questions about how my family is doing, or what our status is,” she said. “I decided to stay home.”

It makes her all the more excited to spend this holiday with her family, in their new home in Mexico.

“We will do Thanksgiving, Christmas and New Year's all in one,” she said. “I’m just so grateful to Mexico for giving me my family back.”