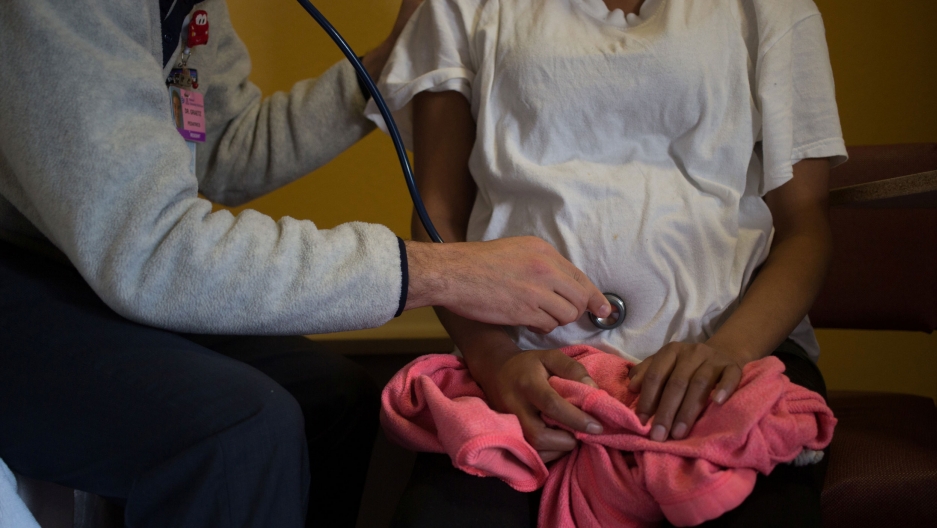 A woman traveling from Guatemala, who is six months pregnant with a boy, is examined by a volunteer medic in a motel used as a temporary migrant shelter where she was staying in Tucson, Arizona, on Nov. 30, 2018.

A 19-year-old Honduran woman was nearly separated from her newborn soon after giving birth while in US Customs and Border Protection custody this month, shortly after crossing the US southern border.

The teen had turned herself into CBP agents at the border while in labor, seeking medical services she could not get in Tijuana, Mexico, where she had been previously.

Yesterday and today, I’ve been at a Chula Vista hospital where Border Patrol has a 19yo mother from Honduras who just gave birth detained without access to an attorney. Her legal rep & other sources are saying they’re planning to return mom to MX under MPP and keep the baby here pic.twitter.com/Rbcimf5cx7

Pinheiro told The World there have been numerous documented cases in which CPB or Immigration and Customs Enforcement have separated newborns from their mothers after births in US custody.

“There's actually probably dozens of cases like this every month along the US border,” she said. “And we're not entirely sure of the exact scope of the problem because most of it's done in secret.”

Following widespread media attention and public outrage, CBP officials announced that the young mother would be allowed to stay in the US with her child as her asylum claim is adjudicated. Her case is just one example of the hurdles faced by pregnant migrant women and new mothers navigating the Trump administration’s tightening immigration policies.

ICE did not return The World’s request for information regarding separations of newly born babies from their mothers.

Related: How families celebrate Christmas with their deported spouses

The Honduran teen could have been sent back to Mexico under the Migrant Protection Protocols — a Trump administration policy under which asylum-seekers crossing at the US southern border are returned to Mexico to await their US immigration proceedings.

And while MPP does have exceptions for vulnerable migrants — such as those with health issues — the decision to send someone to Mexico often comes down to the discretion of individual border officers.

“Inconsistent review of those exceptions to the 'Remain in Mexico' policy are leading to human rights violations,” said immigration attorney Ruby Powers. “The whole concept is a violation of human rights law and policy because of the lack of access to medical and legal care, as well as being left in squalor and makeshift tents along the border — children, pregnant women, people with medical conditions are at the whim of whoever comes along.”

Also known as “Remain in Mexico,” MPP has faced harsh scrutiny as numerous accounts detail severe human rights abuses, such as returning migrants to high-risk areas where they can face threat of violence, rape, and lack of health care services.

Related: 'Remain in Mexico' policy has been confusing for migrants

Under the Trump administration, protections for migrant and asylum-seeking families have been systematically eroded. The administration's 2018 “zero tolerance” policy, in which thousands of children were separated from their parents at the US-Mexico border, drew worldwide condemnation. Public outrage and the courts pushed the administration to end “zero tolerance” in June 2018. But even after the policy was reversed, hundreds of family separations have occurred.

For the 19-year-old mother, being subject to MPP could have dramatically altered the future outcome for her and her child.

“I believe that had she been returned to Mexico, it would have been difficult to impossible for her to ever see her baby again,” Pinheiro said.

Powers said parents might not have sufficient funds or knowledge of the legal system to pursue parental rights. “We've seen cases where people lost touch with their children and after they were deported,” Powers said, adding that even with access to resources parents “might be afraid to assert their rights.”

Related: Why is the US still separating migrant families at the border?

Such situations can be traced to Trump's January 2017 executive order that made all immigrants equal priorities for immigration enforcement, regardless of criminal backgrounds.

Prior to those policy changes, pregnant women were only detained by ICE when mandated by law or under “extraordinary circumstances.” In response to the executive order and DHS policy, ICE ended that “presumption of release” for pregnant women. Decisions to release pregnant women from ICE custody are now decided on a case-by-case basis, according to ICE.

And those decisions can be inconsistent, Powers said. Sometimes they’re based on medical reasons, other times whether there is room in limited family detention facilities.

According to a Government Accountability Office report released this month, ICE data show that detentions of pregnant women increased by more than 50% — from 1,380 in 2016 to 2,098 in 2018. The vast majority of these detentions (90-96% each year) resulted from Border Patrol arrests, while 91-97% of detentions of pregnant women did not have criminal convictions. Most were held for 15 days or fewer. Detentions between 2015 and 2018 also increased for nursing women, who were generally held for 30 days or less.

But Powers says changes in policy are likely an attempt by the federal government to deter pregnant women from coming to the US — not an attempt to hold them in custody.

“If you detain them there, they're going to give birth at some point. Or they could have a complication. Or if they lose the baby — all of that is going to be a potential lawsuit. And so the liability increases,” she said.

But detention can have significant effects on the well-being of migrants and asylum-seekers. ICE is responsible for providing detainees with “safe, secure, and humane confinement.” But while immigrant detention is not technically supposed to be punitive, it is, researchers argue.

Mistreatment and abuse is rife in many facilities, some of which are privately owned. According to the ACLU, “there are no regulations or enforceable standards regarding detention conditions, including medical treatment” and there is little recourse for detained individuals to address shortcomings — which have proven fatal repeatedly.

Attorneys interviewed by GAO “provided anecdotes of cases of pregnant detainees who experienced medical challenges, including miscarriages while in custody,” according to the GAO report.

Ten women experienced miscarriages just prior to or while in ICE custody in fiscal year 2017; 18 miscarriages happened in FY2018, according to a manual review by the agency, as reported by The Arizona Republic.

Research suggests that psychological stress can increase risks in childbirth and the potential for miscarriage, and the condition of migration is highly stressful, pregnant or not.

“What's also complicated is that you put the pregnant woman in any contained environment with lack of nutrition and medical care, and you're bound to have complications, especially with many of the women have already gone through so much just to get there in the first place,” Powers said.