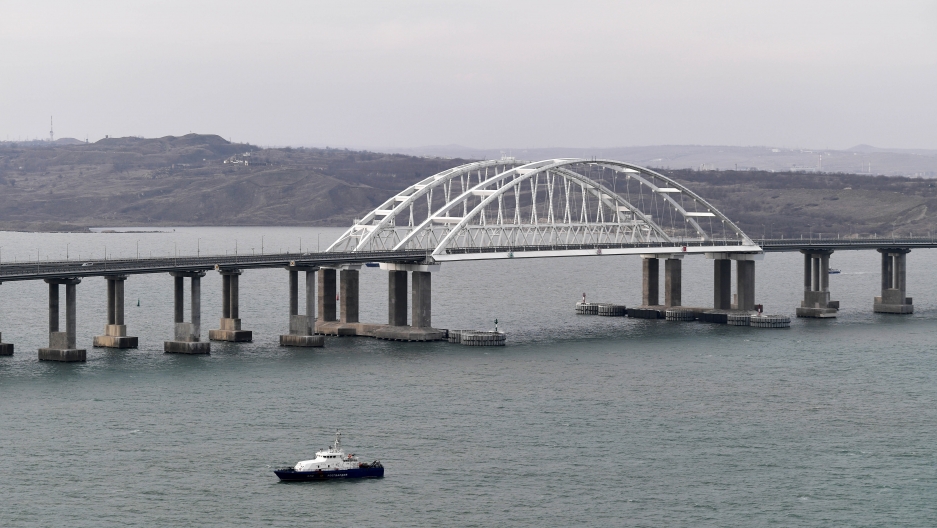 An aerial view shows a road-and-rail bridge, which was constructed to connect the Russian mainland with the Crimean peninsula, before the opening ceremony of its railway part, in the Kerch Strait, Dec. 23, 2019.

On Monday, Dec. 23, 2019, President Vladimir Putin opened a rail route linking Russia's two biggest cities to Crimea, — which Moscow illegally annexed from Ukraine in 2014, — and said it proved that the country could deliver on giant infrastructure projects.

Putin inaugurated the passenger service by personally taking a train across the road-and-rail bridge which Russian engineers built to link Crimea to southern Russia after an earlier pre-annexation route that ran through Ukraine was shut down.

"With your work, talent, determination and single-mindedness, you've shown that Russia is able to do such world-scale infrastructure projects. This is after all the longest bridge not only in Russia but also in Europe," Putin told a crowd of construction workers.

European Union sanctions ban European citizens and companies from investing in Crimea, including in the peninsula's transport and infrastructure, something which complicated Russia's drive to build the bridge, which cost about $3.5 billion.

Construction of the nearly 12-mile bridge was opposed by Ukraine, which says it wants the Black Sea peninsula back. The Kremlin has ruled out returning Crimea.

The bridge, likely to be viewed as an important part of Putin's legacy, was designed to integrate Crimea into Russia's economy and to end its relative isolation by allowing Russia to supply it by road and rail as well as by sea and air.

Putin said the new rail route would carry around 14 million passengers and about 13 million tons of freight next year. 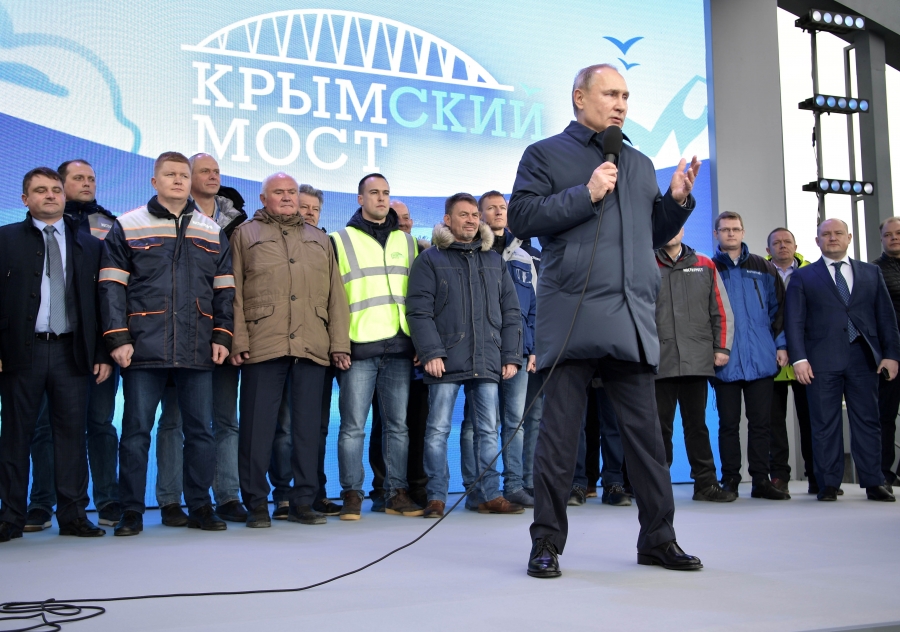 Russian President Vladimir Putin delivers a speech during the opening ceremony of the railway part of a bridge, which was constructed to connect the Russian mainland with the Crimean Peninsula across the Kerch Strait, in Taman, Russia, Dec. 23, 2019.

Alexey Starodubov is the director of the Crimean Expert Center in Ukraine. He's a former adviser on foreign investment projects to the Crimean government before the territory was annexed by the Kremlin. Starodubov has followed the development of the bridge since it was first proposed and spoke to The World's Marco Werman.

"I used to work with this project when we had this project as a common one before annexation, so it used to be Ukrainian and Russian," Starodubov said. "It's a big infrastructure project for Russia and for Crimea, of course." But Starodubov says the bridge is "primarily an image project."

"I'm not really sure that this bridge will influence positively on [the] economic development of Crimea."

Marco Werman: You say image, but Vladimir Putin says this new bridge will be able to carry all those passengers, 14 million, in fact, with the rail, and 13 million tons of freight next year. So won't it naturally boost both Russia and Crimea, as Putin claims?

Alexey Starodubov: I'm not really sure that is true, because ... I know very well the economic situation in Crimea. So in comparison with 2013, the gross regional product, the structure of regional product, was destroyed. And we don't have traditional spheres of economics right now in Crimea, like industry, [an] agricultural sector or [a] financial sector. We don't have investments right now there. And all these seizures happened because of European Union, as well as United States, sanctions regime. As of now, we have a black hole in terms of investments, in terms of export in Crimea. Just to say that ... the construction of this bridge, it will influence the economic situation — I'm not really sure.

It's not a cheap project, it cost well over $3 billion. Why would Russia go ahead with this bridge if it were not an investment economically? And if it is about image, what is the image Putin wants to create here?

They had to show to the world that they could construct such a project. It's just [an] explanation that they have close ties with Crimea, so this is some kind of communication line between the rest of Russia [and] the occupied peninsula. In that sense, there is no sense to analyze the economic consequences related to this project. But ... this is a brutal violation of international law and nothing more as only an image project. That's it.

If one of your main concerns is the violations of international law that this rail and bridge present, what do you think the US should do? Do you think Washington will provide assistance and will they also bring in sanctions?

I think they could and they have to do this because you are absolutely right. You mentioned about the violation of international law, and if you are talking about a violation of international law in occupied Crimea, next time it could be somewhere else in the world. So that's why. You have to pay attention to such violations, we have to explain to Russia that we are living in an international law sphere. We have the United Nations and we have particular rules, and they have to follow these rules. So that's why I think sanctions will be a very, very influential instrument, which could be used and should [be] used by the United States, as well as the European Union.