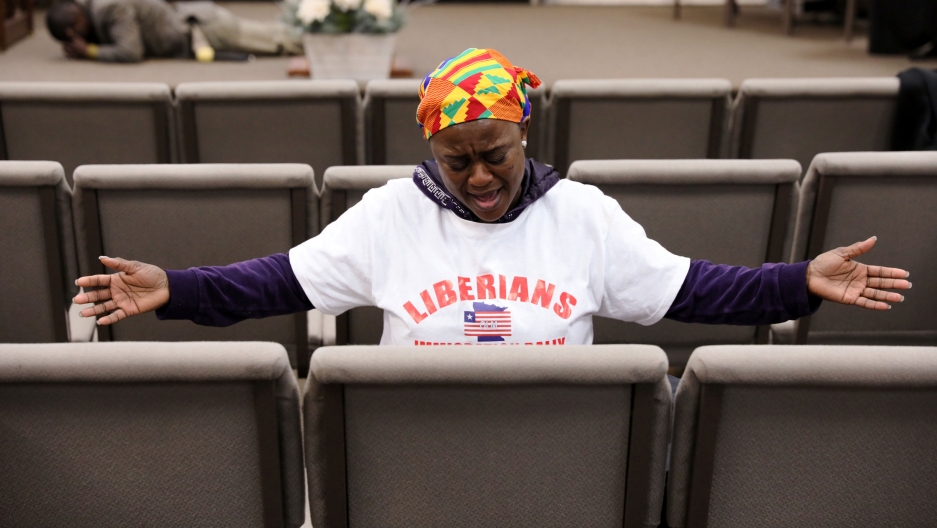 For more than two decades, thousands of Liberian immigrants living legally in the US have only been able to plan their lives in increments of 12 to 18 months under short-term humanitarian programs that exist at the president’s discretion.

But as of this week, a pathway to green cards and US citizenship is within reach. A provision buried within the behemoth, $738 billion defense policy bill passed by the US Senate on Tuesday, Dec. 17, will allow Liberians to apply for legal permanent residency.

The provision for Liberians caught immigration advocates by surprise. Two Democratic senators, Jack Reed of Rhode Island and Tina Smith of Minnesota, led efforts to include it in the bill.

“This gives [Liberians] a chance to stop living from year to year, extension to extension, to finally be able to put down roots and have some security and legal equality.”

“This is a game-changer,” said Amaha Kassa, executive director of African Communities Together, a national organization that has fought for the Liberians to stay in the US. “This gives them a chance to stop living from year to year, extension to extension, to finally be able to put down roots and have some security and legal equality.”

“People are extremely emotional,” he continued. “There’s a lot of disbelief that this is real. There’s also a profound feeling that their faith has been justified.”

About 4,000 Liberians in the US are beneficiaries of Deferred Enforced Departure, or DED, a program that grants them work permits and temporary reprieve from deportation. Most arrived in the US before or during Liberia’s civil wars, which spanned roughly from 1989 to 2003 and killed nearly 250,000 people. As longtime US residents, many DED holders have American children and own homes and businesses in the US.

Trump said repeatedly he would terminate DED for Liberians. Earlier this year, Liberian DED holders came within days of becoming undocumented overnight until the Trump administration extended their status by one more year, to March 30, 2020.

Liberians who spoke to The World this week expressed cautious optimism. After all, Trump had to sign the defense bill for it to become law — which the president did Friday evening.

“It doesn’t feel very real. I’m still processing,” said Yatta Kiazolu, a 29-year-old Ph.D. student and Liberian DED holder in Los Angeles who is a plaintiff in a lawsuit challenging Trump’s termination of the program. “Before, we were trying to navigate all these obstacles, and suddenly all these obstacles are almost gone.”

“Maybe when I’m filling out paperwork it will feel real,” she added. “Or maybe when I get a five-year driver’s license and a US passport it’ll feel real.”

Related: Legal status for thousands of Liberians in the US hangs on a court decision 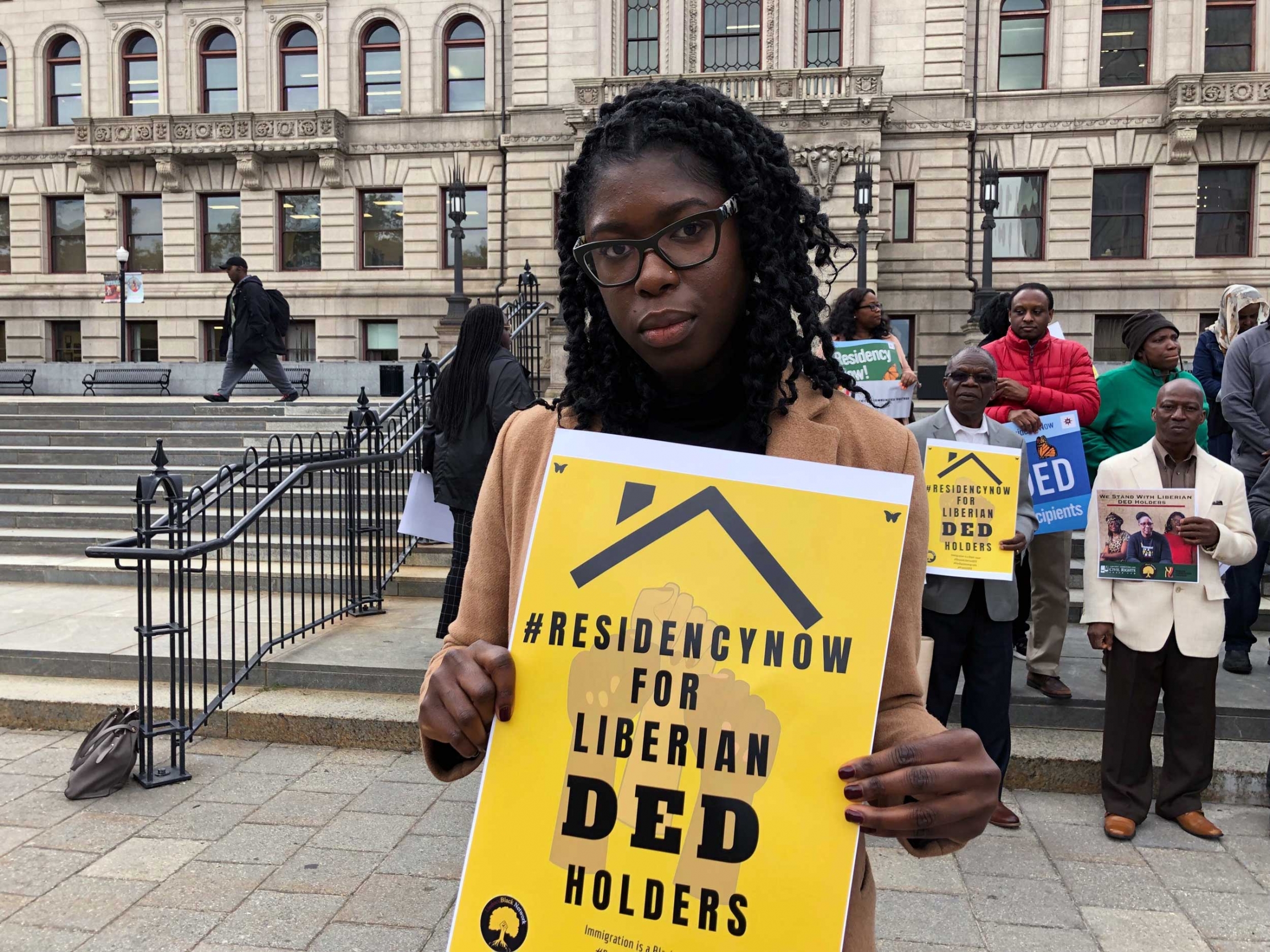 Yatta Kiazolu, a 28-year-old Ph.D. candidate at the University of California, Los Angeles, said she could face deportation in March due to the Trump administration's termination of a legal program that allows her and other Liberians to stay in the US. Kiazolu joined other DED holders at a court hearing in Worcester, Massachusetts, Oct. 9, 2019.

Another plaintiff, Christina Wilson, 61, told The World she felt “jubilant” when she heard the news.

“For 20 years I’ve been living here not knowing what’s coming next,” said Wilson, a nurse at a senior home in New Hope, Minnesota. “This really lifts up my spirits. I’m praying that it finalizes.”

The moment is also bittersweet, several Liberians said, because the defense bill funds Homeland Security, the department that oversees the nation’s two immigration enforcement agencies: Immigration and Customs Enforcement (ICE) and Customs and Border Protection. ICE detains more than 50,000 men and women at any given moment, and its network of facilities is rapidly growing.

Trump’s decision to end DED for Liberians is part of a broad effort to cancel longstanding programs that allow groups of immigrants to temporarily reside in the US — such as Temporary Protected Status (TPS) and Deferred Action for Childhood Arrivals (DACA). In the past, such programs have received broad bipartisan support. Like TPS and DACA, DED offers no pathway to citizenship, only periodic extensions by the president of about 18 months at a time. Liberians have been protected at various points by both TPS and DED over the past two decades.

“I understand that there are efforts underway by Members of Congress to provide relief for the small population of Liberian DED beneficiaries who remain in the United States,” Trump wrote in a memorandum announcing the extension in March. “Extending the wind-down period will preserve the status quo while the Congress considers remedial legislation."

Under the provision in the defense bill, Liberians may apply for permanent residency if they have lived continuously in the United States since Nov. 20, 2014, the date the Obama administration designated Liberians nationals eligible for TPS due to an outbreak of Ebola. The process for how and when DED holders can apply for green cards has not yet been announced.

Some 4,000 people could benefit from the bill, going by a Department of Homeland Security estimate of how many were covered by TPS in 2014.

But the actual number could be much higher. The Migration Policy Institute estimates the bill could benefit at least 9,500 Liberians residing in the US, many of whom are undocumented because they may have been afraid to come forward in the past. Their spouses and children will also be able to apply for permanent residency — which would also increase the number of beneficiaries. 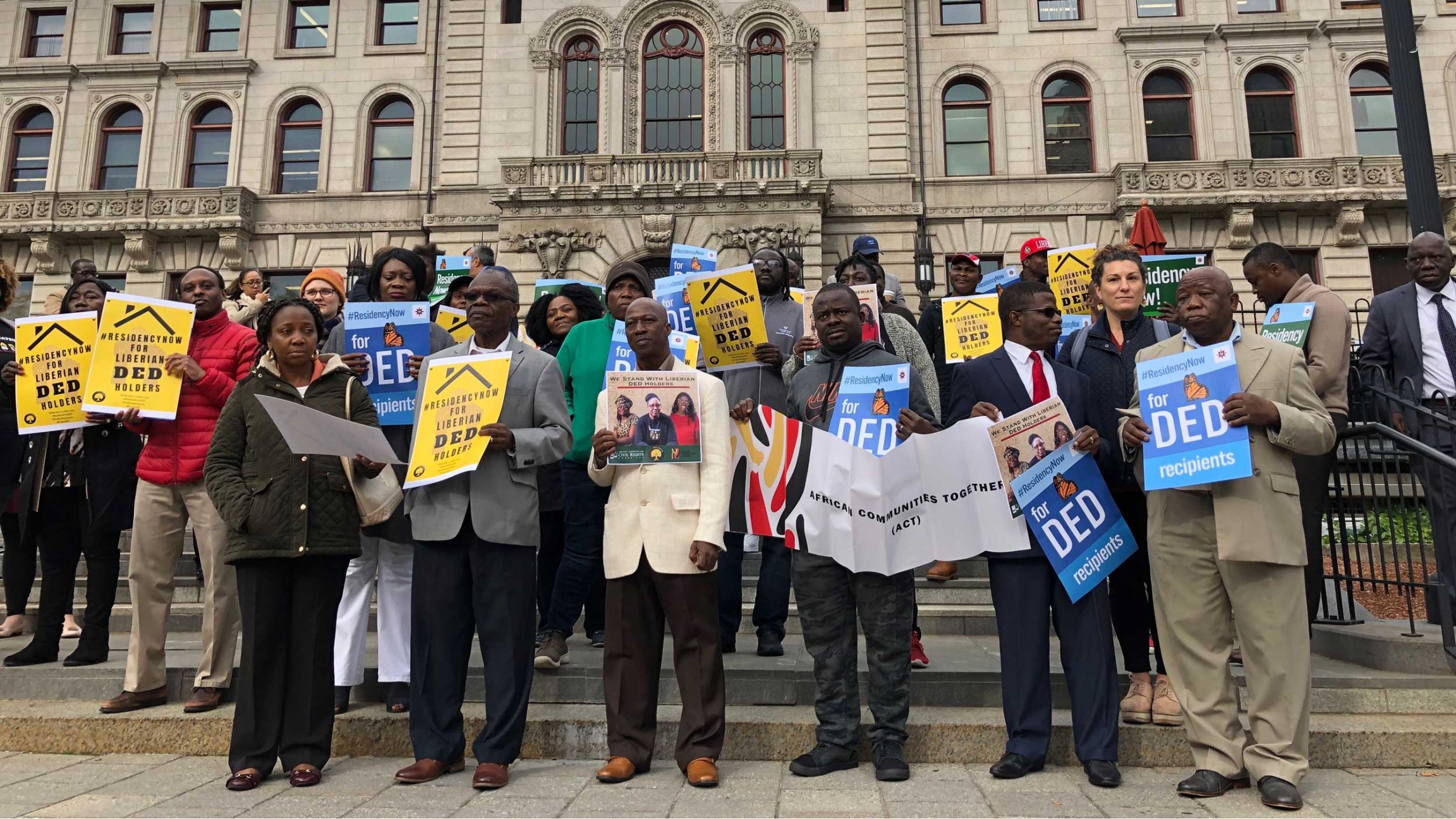 A group of Liberian DED holders and their allies protest in Worcester, Massachusetts prior to a court hearing on Wednesday, Oct. 9, 2019.

Liberian immigrants like Kiazolu and Wilson, along with their advocates, have waged a years-long multifront battle for legal permanent residency.

They have traveled to Washington, DC, to push their Congresspeople for a legislative solution. And they have sought relief from the courts by filing a lawsuit challenging the Trump administration’s termination of the program. That lawsuit is now before the First Circuit Court of Appeals in Boston.

Ya Hello-o to all my #Liberian friends & neighbors! I’m proud of the many contributions Liberians have made to RI & the U.S. I know how much you love America. It is your home. I'm honored to help eligible Liberians achieve permanent legal status & get on the path to citizenship. pic.twitter.com/Bjmw0NAtuu

Attorneys with Lawyers for Civil Rights, a Boston legal services group representing the DED holders, told The World they will still pursue the case even though most of their clients will benefit from the pathway to citizenship created by the defense bill. A hearing is set for Jan. 6.