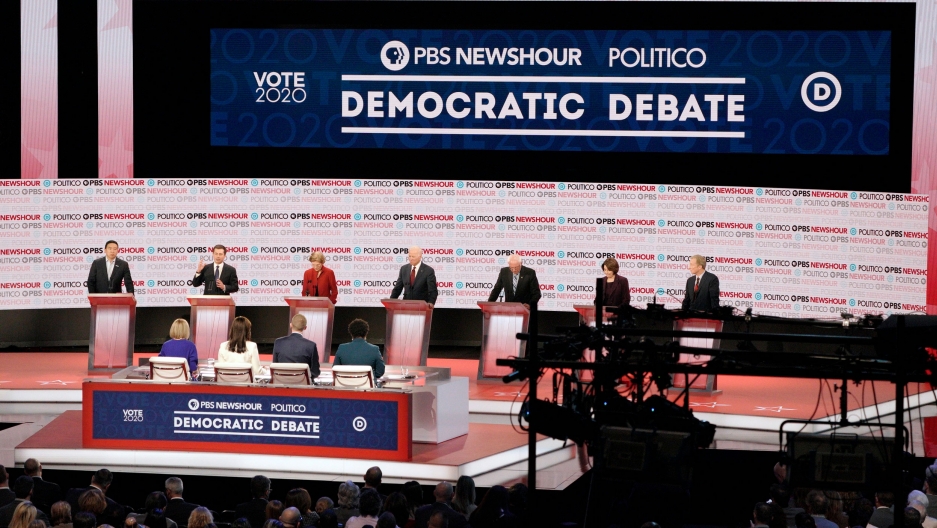 Seven presidential contenders faced off in California Thursday evening for the final Democratic debate before heading into the new year.

One topic came up that really hadn't before: China. Some of the Democratic candidates called for a more aggressive stance towards China.

Buttigieg decried the "use of technology for the perfection of dictatorship” and warned that if elected president, he would lead a worldwide boycott of China if the regime resorted to the bloody tactics against Hong Kong protesters that were used more than 30 years ago against protesters in Beijing.

Biden said he would call for sanctions against China for its internment of Muslim Uighurs and would send “60% of our sea power to that part of the world” as a show of force, while building alliances with other Asian countries to further pressure China.

But billionaire activist Tom Steyer rejected the idea of isolating China, saying the United States would have to continue to work with the economic and political powerhouse. “We can't isolate ourselves from China,” he said. “We have to work with them as a frenemy.”

"We've had many debates previously and there's been very little discussion of foreign policy and not much of China," said Bonnie Glaser with the Center for Strategic and International Studies in Washington, DC. "So I was pleased to see that there was a question about China that a number of the candidates got an opportunity to emphasize the concerns."

Glaser is also a former consultant to the State Department and the Pentagon on China. She spoke with The World's Carol Hills about what was said and what it means going forward.

Carol Hills: What stood out for you among those comments about China?

Pete Buttigieg, the mayor of South Bend, Indiana, took a rather tough stand on China. He said: "When folks out there standing up for democracy here not a peep from the president of the United States, what message is that sending to the Chinese Communist Party? The message I will send is if they perpetrate a repeat of anything like Tiananmen Square when it comes to Hong Kong, they will be isolated from the free world and we will lead that isolation both diplomatically and economically."

Is that really doable when you're president of the United States in dealing with China?

Well, it is doable to take a tough stance, to signal that the United States would respond very strongly if the Chinese were to use force to crack down on the protesters in Hong Kong. President [Donald] Trump has not made a similar statement.

Technology is something that Andrew Yang focused on. He said: "I have family in Hong Kong. I spent four months there, and seeing what's happening on the streets, it's shocking. They banned face masks in Hong Kong. Why? Because they have AI technology that now is using facial recognition to identify protesters if they so much as do anything on the street."

I think that Andrew Yang is exactly right to focus on the use by China of facial technology to root out violent protesters in Hong Kong. He also mentioned that China is leapfrogging the United States in artificial intelligence and that these advances are being subsidized by the Chinese government. And I think that these are very concrete points that demonstrate he really has an understanding of some of these challenges that China poses in the area of technology.

Now, Joe Biden, he actually referenced the Uighurs in his comments. He said: "We have to make clear is that we, in fact, are not going to abide by what they've done. A million Uighurs, as you pointed out, Muslims, are in concentration camps. That's where they are right now." W​​​​hat could a US president do about the Uighurs?

I think that's the important question and one that I think that Joe Biden actually struggled with in his response.

Biden: "We should be moving 60% of our sea power to that area of the world to let, in fact, the Chinese understand that they're not going to go any further."

He also mentioned that the United States should have raised this at the United Nations, but there really can't be a military solution to this. And I think it really goes to the question of how difficult it is to convince China to change its policies domestically. There are no easy solutions because China is a rising power and countries in the world want to have good relations with China even as they are concerned about China's behavior. But they also want to cooperate with China. And indeed, some of the candidates talked about the need to cooperate with China. Mr. Steyer, for example, he emphasized, as he does, climate change.

Now, what's interesting is, as you say, China's a tough country to deal with because it's so powerful, it's such an economic force. And Judy Woodruff kind of put a very plain and simple question: "Should the US is my question do more than protest and issue sanctions? Should the US, for example, boycott the 2022 Beijing Olympics?" What did you think of the answers to that?

Well, perhaps not surprisingly, not a single candidate addressed that question. It's hard to say whether such a tough policy could really get support in the United States and around the world.

How did Elizabeth Warren and Bernie Sanders come off last night about China?

Well, neither Elizabeth Warren nor Bernie Sanders had the opportunity to talk about China last night. But Elizabeth Warren has talked in the past pretty tough words about China. She has said that the United States has to safeguard its democracy. She frames the challenge as one of authoritarianism and corruption versus democracy and human rights. She's put forward a plan to root out corruption in the defense industry, for example. And she's also criticized China's very poor record on environmental protection, suppression of labor rights and years of currency manipulation. So I think that she has raised some different issues than some of these other candidates actually raised last night.