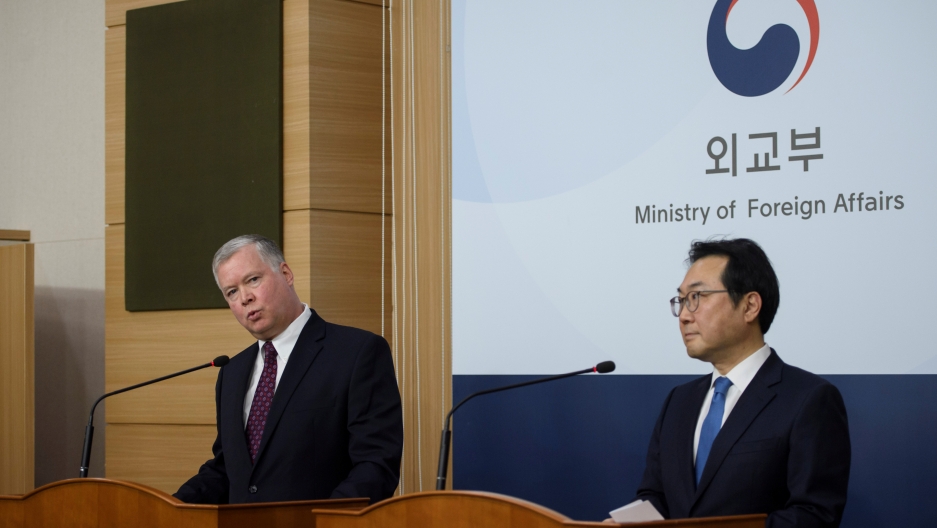 A dispute over the cost to base American soldiers in South Korea is straining the two countries' decades-old alliance as North Korea threatens to resume military provocations.

Pyongyang has given the Trump administration a year-end deadline to make new concessions to restart stalled denuclearization talks. And in typically cryptic language, the Kim Jong-un regime has warned that if dialogue continues to fail, the US might receive a “Christmas gift.”

Earlier this week in Seoul, Stephen Biegun, the United States' special representative for North Korea — Washington’s point man to the north — called on his counterparts to come back to the negotiating table.

“It’s time for us to do our jobs,” Biegun said during a press conference in Seoul on Dec. 16. “We are here and you know how to reach us.”

North Korea did not respond.

Pyongyang blames Washington and its so-called “hostile policy” for the deadlock talks, which broke down in October. Through its official media, it recently proclaimed successful weapons systems tests at a satellite launch site — a facility where long-range missiles could be fired, observers said.

Chun In-bum, a retired South Korean general, warned that Pyongyang could make good on its promise of a present just in time for the holidays.

“When North Korea makes those types of threats, they usually keep them. ... So I wouldn’t be surprised that on Christmas morning, instead of Santa Claus, we see a rocket flaming through the air.”

“When North Korea makes those types of threats, they usually keep them,” Chun said. “So I wouldn’t be surprised that on Christmas morning, instead of Santa Claus, we see a rocket flaming through the air.”

Chun said South Korean and American forces stand ready to confront Pyongyang’s military actions. But as tensions rise, doubt is cast over the US commitment to defend its longtime ally.

Washington has asked Seoul to pay a reported $4.7 billion annually— a 400 percent increase from what it currently pays—to host 28,500 American soldiers currently stationed in South Korea. At present, the south contributes $870 million to defense cost-sharing, known as the Special Measures Agreement (SMA).

The US military’s forces have been based in South Korea since 1953, when a ceasefire agreement was signed — bringing a de facto end to the Korean War.

President Donald Trump has remarked that South Korea is "very wealthy," implying that the country must pay more for America’s continued protection against North Korea. The US president has long complained that foreign nations—not just South Korea—take advantage of the US military.

Chun said this “transactional” approach goes against the spirit of the US-South Korea partnership.

A fifth round of SMA talks concluded Dec. 18 without an agreement. Despite current provisions expiring at the end of December, US and South Korean representatives will resume negotiations next month, according to the Yonhap News Agency.

The disagreement over what is regarded as a cornerstone of the US-ROK alliance could also have regional consequences.

Some analysts say the cost-sharing dispute between the two allies is welcome news to Pyongyang and its closest ally, China.

“China’s fundamental interest is to see the US security role in East Asia diminish. ... This serious tension in the US-South Korea alliance is a good thing to the Chinese perspective.”

“China’s fundamental interest is to see the US security role in East Asia diminish,” said John Delury, a lecturer in Chinese studies at Seoul’s Yonsei University. “This serious tension in the US-South Korea alliance is a good thing to the Chinese perspective.” 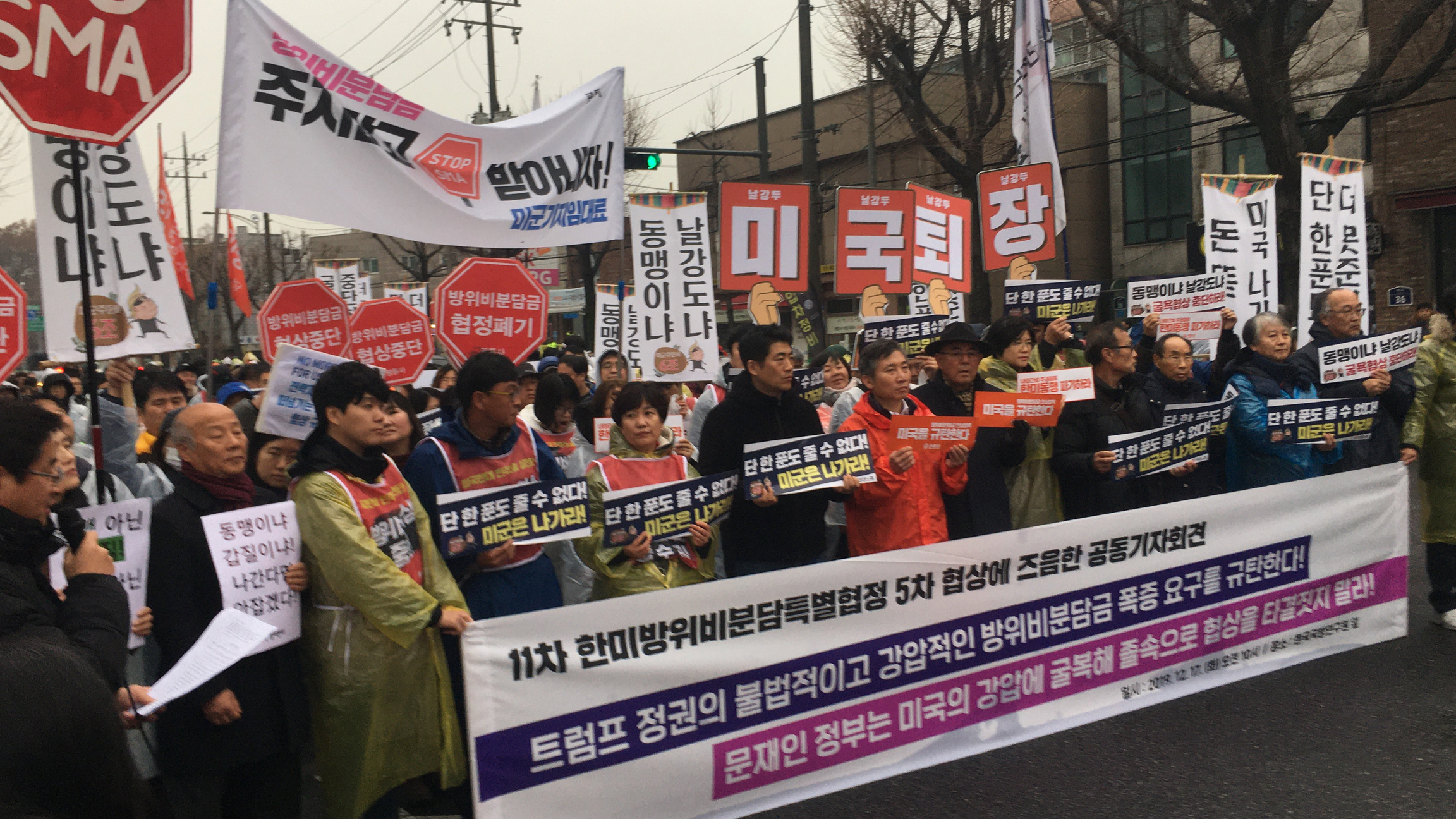 A small, but vocal minority say South Korea shouldn’t pay anything to host the US forces and many of those want the American military to leave their country altogether, and marched on Dec. 17, in Seoul, South Korea.

Opposition to US demands

The vast majority of South Koreans support their country’s alliance with the United States. A survey conducted this month by the Chicago Council on Global Affairs found that 92% of respondents have a favorable opinion, and a majority feel the presence of American soldiers contributes to national security.

But the poll also shows that 68% of South Koreans say their government should negotiate a lower contribution to the cost-sharing agreement than what the Trump administration has demanded.

A small but vocal minority say South Korea shouldn’t pay anything to host the US forces, and many want the American military to leave their country altogether.

Around 200 demonstrators gathered outside the building where cost-sharing negotiations took place on Tuesday, Dec. 17, in Seoul.

Some held banners saying, “Not A Cent More,” and an activist on a megaphone led the crowd in chants of “Stop SMA.” A line of riot police dressed in yellow rain gear separated protesters from the venue gate.

“I don’t think it’s appropriate anymore for American soldiers to stay in Korea,” said 52-year old Ahn Ji-joong, noting that US, South Korean and North Korean leaders have all pledged to work toward peace.

A group of demonstrators tore apart a large American flag during another protest in front of the US embassy in Seoul on Tuesday.

“The US is a thief asking for more money for land that it rents from Korea."

“The US is a thief asking for more money for land that it rents from Korea,” Chang Yoo-jin, a university student, told the crowd from a stage set up in a downtown plaza. “We don’t need them here."

Park Jung-eun, secretary-general of the civic group People’s Solidarity for Participatory Democracy, said she disagrees with the argument that the US military keeps South Korea safe.

“North Korea is, of course, a threat to our security, but the US threatens that, too,” she said.

Park said the presence of American soldiers and advanced weapons increases the risk of a North Korean attack. She said South Korea covered the majority of the reported $10.7 million costs to relocate American soldiers to the newly expanded Camp Humphreys — the largest, overseas US military base — located about 40 miles south of the capital.

“I want Seoul to pay less than it already does,” Park said, adding that she “can’t understand the need to have so many American soldiers here” in the first place.