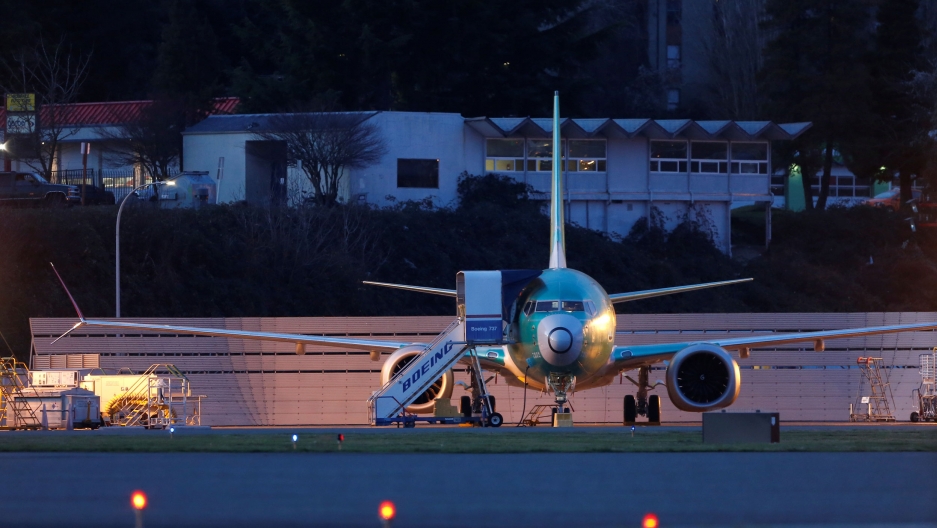 An unpainted Boeing 737 Max aircraft sits on the tarmac at the Renton Municipal Airport in Renton, Washington, Dec. 16, 2019.

In the wake of two fatal crashes in Indonesia and Ethiopia, Boeing said Monday it would suspend production of its 737 MAX jetliner in January after the Federal Aviation Administration (FAA) refused to approve the jet's return to service before 2020.

The halt of the 737 MAX production is the biggest assembly-line halt for Boeing in more than 20 years.

Boeing, which builds the 737 south of Seattle, said it would not lay off any of the roughly 12,000 employees there during the production freeze, though the move could have repercussions across its global supply chain and the US economy.

The 737 MAX has been grounded since March after two crashes in Indonesia and Ethiopia killed 346 people within five months, costing the plane manufacturer more than $9 billion so far.

The decision to halt production will have little immediate impact on airlines that have already seen deliveries halted, forcing many to cancel flights or lease older replacements.

But it marks a deepening of a crisis that has already seen Boeing's fastest-selling jet grounded worldwide, its safety record scrutinized, customers pressing for compensation and its cornerstone relationship with the FAA placed under strain.

It also threatens to hit US economy, with House representative Rick Larsen calling Boeing's decision "a body blow to its workers and the region's economy."

"The only saving grace is the Boeing leadership has promised not to lay off any workers. I am ready to work with Boeing workers to ensure ... they will have access to the necessary resources in the event of a prolonged shutdown."

Until now Boeing has continued to produce 737 MAX jets at a rate of 42 per month and purchase parts from suppliers at a rate of up to 52 units per month, even though deliveries are frozen until regulators approve the aircraft to fly commercially again.

Boeing did not say how long the shutdown might last, stressing this was up to the FAA. Previous efforts to predict when the 737 MAX might return to service after software training changes had drawn a sharp response from the US regulator.

The FAA said it would not comment on what it described as a Boeing business decision but would continue to work with global regulators to review proposed changes to the 737 MAX.

"Our first priority is safety, and we have set no timeframe for when the work will be completed," the agency said.

Analysts said the shutdown was inevitable after Boeing was forced to abandon its end-year goal for returning to service.

"It is not a surprise that they don't continue producing planes that don't have a home," said Adam Pilarski, senior vice president at Virginia-based consultancy AVITAS.

After holding out for months by keeping its factory lines running at optimum speed for a quick return, Boeing said it had decided to put emphasis on delivering some 400 planes that have been produced and stored, once the FAA gives the green light.

Such an emphasis would most quickly release much-needed cash for Boeing, but could cause other problems when production resumes, industry sources said. Supply chains are fragile due to record demand and abrupt changes in speed often cause snags.

Boeing did not say what extra financial impact the 737 MAX shutdown would have ahead of annual results due in January.

A spokesman said it would continue production of a military derivative of the 737, the P-8 maritime surveillance jet.

Boeing's shares closed down 4% on Monday and fell 1% after hours. Shares in Spirit AeroSystems Holdings, its biggest supplier, fell 2%.

Analysts highlighted General Electric, Safran and Senior as other suppliers that could experience disruptions.

GE and Safran co-produce engines for the 737 MAX and unlike most suppliers are paid mostly once the airplanes are delivered to the airline buyer.

Southwest Airlines, the largest 737 MAX customer, said last week it had reached a compensation agreement with Boeing for a portion of a projected $830 million hit to operating income in 2019 from the grounding.