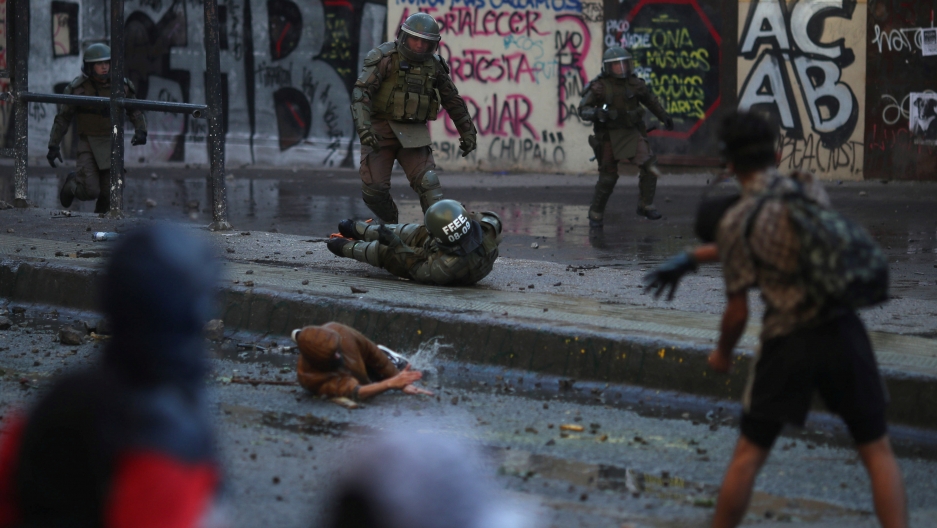 Riot police officers clash with demonstrators during protests against Chile's government in Santiago, Chile, on Dec. 14, 2019.

Protests that erupted across Chile exactly two months ago have taken a dramatic turn: The government has agreed to a vote next April on possible changes to the Chilean Constitution that was put in place in 1980 during the brutal dictatorship of Augusto Pinochet.

The protests in Chile began on Oct. 18, with students demonstrating against a subway fare hike. They quickly grew into something much bigger: Stores and subway stations were set on fire and thousands of people poured into the streets to protest systemic inequality. Chilean President Sebastián Piñera, a billionaire businessman, ordered in the military and declared a state of emergency in Santiago, the nation's capital. More than 6,000 people were detained and at least 18 killed in the resulting clashes.

Related: Chile's Piñera extends state of emergency, says 'we are at war'

On Oct. 25, more than 1 million people took part in the protests, pressuring Piñera to withdraw the subway fare hike.

Eventually, Piñera offered several other reforms, including a minimum wage, increased state pensions and stabilized electricity prices. But for many Chileans, these reforms were not enough and they continued to apply pressure to Piñera's government. With a stunning result: On Nov. 14, the government agreed to allow Chileans to vote in April on whether they want a new constitution and who should draft it.

Related: Amid unrest and rights abuses, Chile protesters say 'there's no turning back'

Our host, Marco Werman spoke with Catalina May, host of the Spanish-language podcast, Las Raras, about these historic developments.

Marco Werman: How did this happen? How did it come about?

Catalina May: This happened because among all the protests that you might have seen on TV, something else is happening, something that is less visible, but is very important, as well. In a very spontaneous way, people started gathering, getting together, meeting in parks and squares and universities and social centers.

What were they doing in these gatherings?

They were basically trying to figure out what are the demands of the social movement. Because there is no leadership, these spontaneous meetings started to become assemblies and the conversations started to get more serious. And among all the demands, one became very quickly a priority, and that was a change of the constitution.

What is it about the Chilean constitution and changing it that is so important to the people of Chile? ?

It's very important because the Chilean constitution was imposed during Augusto Pinochet's dictatorship. They killed and tortured and disappeared thousands of people and they also transformed the country into what it is now — a very unequal and unfair society.

So next April, with this vote, what exactly will people be voting on?

How historic is this moment for Chileans, for most Chileans?

That's really the feeling now. This is huge. It's very important for us. But suddenly we can celebrate as we would like because the repression during these eight weeks has been terrible. Five people have been killed and 352 people have been shot by the police in their eyes and thousands have been injured, tortured and sexually abused by state agents.

Are you confident this vote is going to happen, that you will have a new constitution and a new way forward in Chile come April?

I do. The right-wing parties are trying to block everything, so it's very hard to move forward. But I really believe in the power of the social movement and I believe in people and I believe that they want to build a better country.