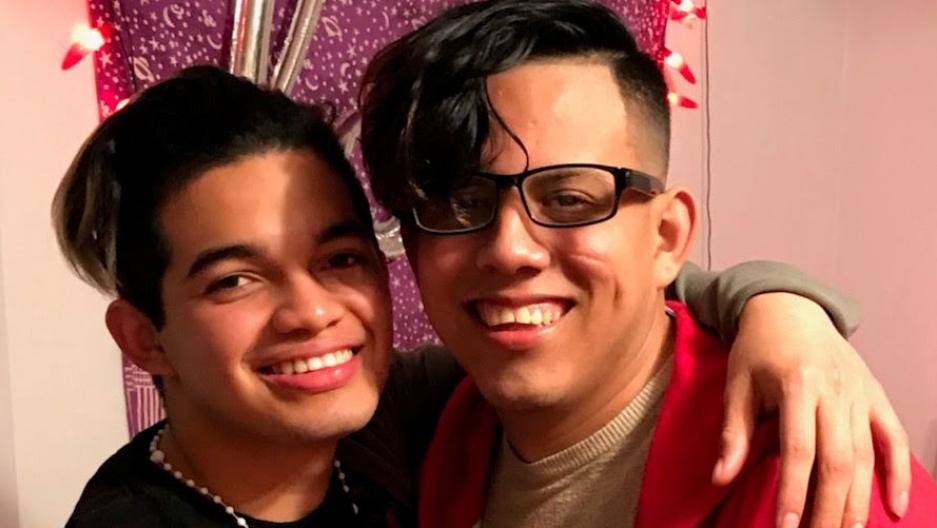 Darwin Garcia Portillo, left, and his partner Oscar Juarez Hernandez, pose together for the first time since Juarez Hernandez was released from detention in Louisiana last month.

After living as an openly gay couple in Honduras, Oscar Juarez Hernandez and Darwin Garcia Portillo thought the United States was the last place where their inability to get married might get in the way of their future together.

In March 2019, Juarez Hernandez and Garcia Portillo entered the United States at the San Ysidro port of entry in San Diego expecting to claim asylum based on persecution in Honduras due to their sexual identities. However, soon after they arrived, border officers separated them, telling Garcia Portillo he would be sent to a for-profit detention facility in Louisiana. Juarez Hernandez was sent to detention in Colorado.

Due to the widely different asylum approval rates by state, there was a chance that would be the last time they saw each other. In Colorado, 22% of asylum claims were granted in fiscal year. Louisiana, by contrast, granted less than 10% of claims.

“I watched them through a tiny crack in the wall, taking Darwin away in handcuffs,”  Juarez Hernandez says, recalling the moment that he realized he might never see his partner again. “They didn’t even let us hug goodbye.”

If Juarez Hernandez and Garcia Portillo had been married, things might have worked out differently. While they likely still would have been separated while waiting for their asylum cases to be processed, United States Citizenship and Immigration Services policy states that a married asylum seeker can sponsor their spouse through “derivative asylee” status, a process which essentially ensures that they can remain together so long as they can present a marriage or civil union certificate.

Related: LGBTQ couples find safety in numbers in trek to US border

However, for most LGBTQ couples coming from Central America, it is logistically impossible to get married before arriving to the United States. In Honduras — and most other Latin American countries — same-sex marriage is illegal, making it impossible for most LGBTQ migrant couples to prove their partnership to US officials.

No legal document recognizes their relationship. Therefore, they could have easily found themselves in a situation where one person was granted asylum, while the other was deported.

“If a couple is not married, there is no way to link them in the immigration system.”

“If a couple is not married, there is no way to link them in the immigration system,” said Allegra Love, executive director of Santa Fe Dreamers, an organization that supports recently-arrived LGBTQ migrants.

While this US policy also impacts unmarried heterosexual couples, it is particularly devastating for LGBTQ couples, who often fled their home countries because of their sexual orientations and romantic relationships.

“These couples flee persecution with their loved ones to claim asylum in a new country largely due to their relationship,” said Bridget Crawford, a legal director at Immigration Equality, an advocacy organization that represents both LGBTQ and HIV-positive people in the US immigration system. “It is ironic that their claim is denied because they can’t be married.”

“They come here so that they can live as their authentic selves and be protected from persecution, and yet they can’t obtain asylum relief because they couldn’t be married in their country of origin.”

“It is very cyclical,” she continued. “They come here so that they can live as their authentic selves and be protected from persecution, and yet they can’t obtain asylum relief because they couldn’t be married in their country of origin.”

In Honduras, Juarez Hernandez and Garcia Portillo endured exactly the kind of life-threatening harassment that forces LGBTQ migrants to run for their lives.

“One night we were going to the grocery store, when three men started following us,” Juarez Hernandez said, recalling one of their most harrowing nights. “One of them raised a glass bottle and threw it at Darwin, cutting his arm before running away. I had to wrap his arm in my shirt to stop the bleeding.”

After months of receiving threatening messages on Facebook — often from strange men that they didn’t know — Juarez Hernandez and Garcia Portillo were leaving a party one night when they saw a group of gangsters waiting for them. The minute the gangsters saw them, they fired their guns in the air.

“Darwin shouted, 'Run!',” Juarez Hernandez said. “We ran down opposite sides of the street trying to get away from the gang. I had to jump into a dumpster to hide — otherwise they would have cornered us in our house.”

That December,  Juarez Hernandez and Garcia Portillo decided to leave for good. They took buses through Guatemala and Mexico, and arrived at the US-Mexico border one month later, ready to start a new life, away from harassment and threats.

They had no idea that they would be separated.

The pain of separation

“It is so sad,” said Juarez Hernandez, his voice slowing down for the first time since he started animatedly recalling every minute of his and Garcia Portillo’s relationship. “After all of that, we were separated.”

In September, that became a reality — but only for Juarez Hernandez. He went to live with Margarett Bobb, a retired teacher in Denver, Colorado, who is one of a growing number of US citizens volunteering to house and sponsor recently-arrived asylum seekers. Meanwhile, Garcia Portillo was still behind bars at Jackson Parish Correctional Center, which holds about 1,000 immigrant detainees on behalf of ICE at any given moment. His cheerful attitude was starting to fade—especially after some of the other detainees found out he was gay.

“He is being shouted at for being gay. I’m worried about what they might do to him.”

“He is being shouted at for being gay,” Juarez Hernandez said last month, while Garcia Portillo was still in detention. “I’m worried about what they might do to him.”

Fearing for his own safety, Garcia Portillo applied for parole, hoping that it would allow him to wait for his asylum hearing outside of detention, and away from the threats and harassment. ICE denied his request.

The agency said that it reviews parole requests on a case-by-case basis.

Related: She fled abuse in Mexico. This trans woman says she was abused in US immigration detention too.

“The agency is committed to upholding an immigration detention system that prioritizes the health, safety and welfare of all of those in our care in custody, including gay, bisexual, transgender and intersex (LGBT) individuals,” an ICE spokesperson wrote in an email.

However, other LGBTQ asylum seekers who have been detained at Jackson Parish reported different experiences.

“As LGBT detainees, we are the opposite of protected,” said Brittany, a transgender woman from Guatemala who was recently released from Jackson Parish Correctional Center. She declined to give her last name, as she is still waiting for her asylum court date.

“Other migrants would call us disgusting words and threaten to rape us. We were constantly living in fear. The guards would do nothing.”

“There were transgender women who were sexually assaulted because they were being held with the men,” she added. “Other migrants would call us disgusting words and threaten to rape us. We were constantly living in fear. The guards would do nothing.”

Jackson Parish detention did not respond to The World’s requests for comment.

A few days before Thanksgiving, a Louisiana judge ruled that Garcia Portillo would be granted asylum.

“I am not happy, I am beyond happy,” Juarez Hernandez wrote over WhatsApp a few days after the decision.

After Garcia Portilllo gets settled, he is hoping to get a professional qualification as a hairdresser, so that he can continue the business he had in Honduras. Juarez Hernandez is learning English, and hopes to do a chef’s training course in the future.

For now, Juarez Hernandez is just happy to be reunited with his partner: “There is no way to describe the feeling of finally getting to be with the person that you love.”