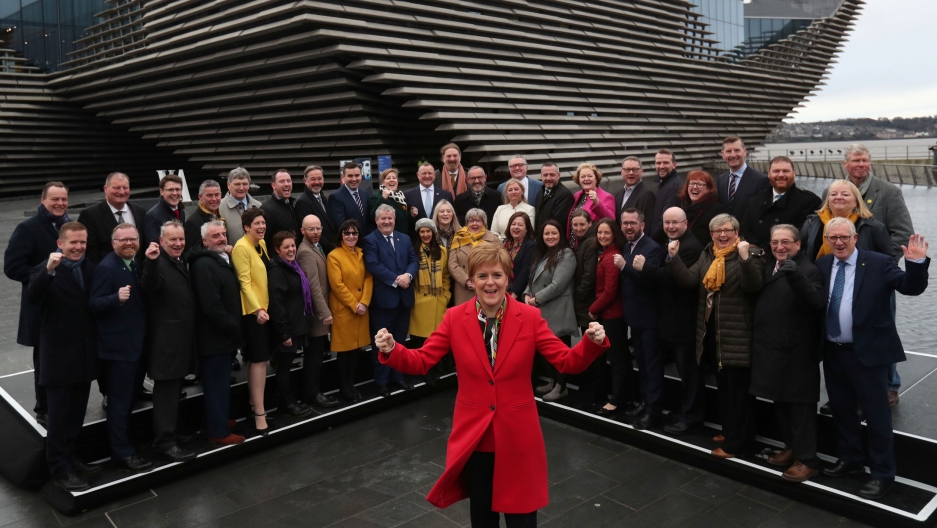 “This one-nation Conservative government has been given a powerful new mandate to get Brexit done,” Johnson said in his victory speech, referring to his campaign pledge to take Britain out of the European Union as soon as possible.

“And not just to get Brexit done,” added Johnson, “but to unite this country, and to take it forward."

But that might be harder than it sounds — because Johnson was not the only winner last Thursday.

The Scottish National Party swept the board in Scotland on a pledge to leave the UK if Brexit happens. In Northern Ireland, for the first time in history, Irish Nationalists got more seats than those committed to preserving the union with London.

Johnson might well be able to lead the United Kingdom out of Europe, but there are now questions over how long he can keep the kingdom “united.”

If Scotland and Northern Ireland leave the UK, Queen Elizabeth II will reign over a smaller realm than any of her predecessors in the past 850 years.

Scotland was, and is, its own country, within the United Kingdom. It has a unique history and identity.

For the past 20 years, Scotland has had its own parliament to manage some internal affairs. A referendum on independence in 2014 narrowly failed. That seemed to put a lid on Scottish aspirations to leave the UK for a time.

But thanks to Brexit, it's back.

“The people of Scotland have spoken,” said the leader of the Scottish National Party, Nicola Sturgeon, after her party’s dramatic victory in the UK elections.

The SNP campaigned hard on remaining in Europe. Now it wants Scotland to leave the UK so it can stay in the EU.

Sturgeon wants a new referendum on independence. “It is time, now, to decide our own future,” she said.

“Let me be very clear,” Sturgeon said. “This is not simply a demand that I or the SNP are making. It is the right of the people of Scotland.” She added this warning to Johnson: “You, as the leader of a defeated party in Scotland, have no right to stand in the way.”

The SNP wants Scotland to get its chance at freedom soon before the UK even leaves the European Union.

But Johnson's Conservative Party has already rejected the idea. A new Scottish referendum would have to be authorized by parliament in London, and the Conservatives say they won’t allow it.

Sajid Javid — a senior Conservative politician — took to the airwaves the morning after the election to lay out some cold, hard political facts.

“Obviously everyone respects the decision of the Scottish people,” he said, “but we will govern as a United Kingdom parliament, and a majority — a strong majority — is held by us. That’s the decision the British people have made collectively… We have ruled out — and will rule out — another Scottish referendum. We had one a few years ago. There will not be another one.”

Scots could try staging a referendum by themselves, as Catalans did in 2017 in an attempt to secede from Spain. That result was ignored and suppressed by Madrid. London is hinting it would do the same to the Scots.

Of course, there's no certainty the SNP could win a new referendum on independence. While most Scots agree freedom would be nice, many remain concerned about the SNP's socialist policies.

It's a stalemate for now, but tension is forecasted for Anglo-Scottish relations.

The Dec. 12 elections ushered in a dramatic result in Northern Ireland, as well. For the first time in history, Sinn Féin — the party seeking a united Ireland — won more parliamentary seats than those who want to maintain the union with Britain.

“I am absolutely very disappointed,” said Arlene Foster, leader of the Democratic Unionist Party, which is opposed to a united Ireland.

Conflict in Northern Ireland cost thousands of lives in the 30 years of Troubles, down to the truce of 1998. Tensions still bubble beneath the surface.

And the question of the Irish border has bedeviled Brexit since the get-go. The previous administration in London depended on the Democratic Unionist Party (DUP) to stay in power, but now they have lost that influence. It's increasingly likely that Northern Ireland will get some kind of special deal when the UK leaves the European Union. Fears of a return to a hard border between the two Irelands seem to be fading.

But the political shifts in Northern Ireland are being watched closely south of the border.

“We’ve seen, without doubt, a big change in the political landscape in Northern Ireland,” said Leo Varadkar — the Taoiseach, or Prime Minister of the Republic of Ireland. “But what hasn’t changed is that the future, I believe, for us in Ireland is a reconciliation; it’s power-sharing; it’s closer cooperation between north and south, and also between Britain and Ireland.”

“So,” added Varadkar, “people shouldn’t race ahead of themselves with, umm, ‘other’ plans.”

“Other plans” such as uniting the two Irelands. In other words, the government in Dublin is in no rush to force the issue of uniting Ireland.

Related: People in Northern Ireland are applying for Irish passports

The Irish Times' commentator, Fintan O'Toole, says there's a practical argument underpinning this. “The British state subsidizes Northern Ireland to a huge extent. The Irish state I think either couldn’t, but even if it could, probably wouldn’t do that.”

Besides England, Scotland and Northern Ireland, there is another "nation" in the UK: Wales.

Wales has self-government to some extent already, and it seems the Welsh are satisfied with that. There are nationalists in Wales too, but they did not do well in Thursday’s election. Instead, Boris Johnson's Conservatives made some gains, meaning there is likely to be no change in relations with London.

So with a December win under his belt, it looks like Johnson's United Kingdom will be staying united — for now.