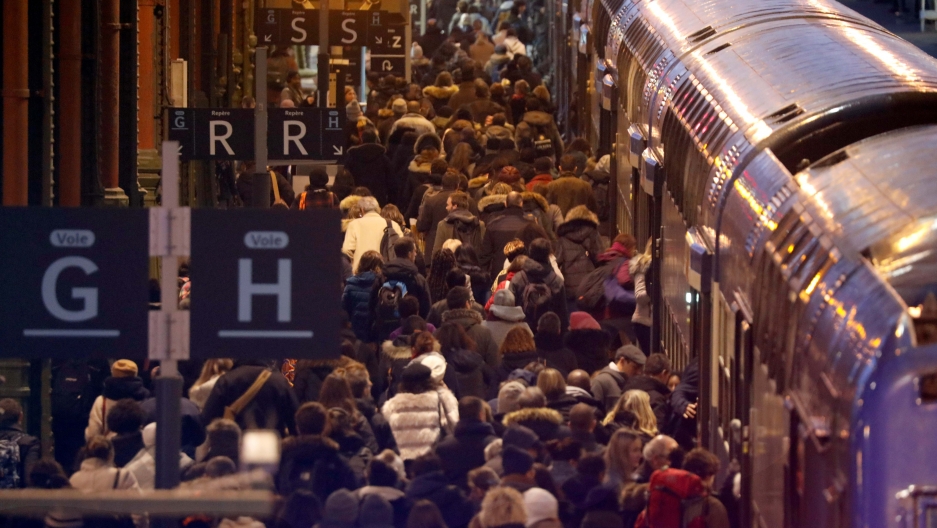 Commuters walk to take a train at Gare de Lyon train station during a strike by all unions of French SNCF workers and the Paris transport network (RATP) in Paris as France faces its eighth day of consecutive strikes against French government's pensions reform plans, Dec. 12, 2019.

As a nationwide strike over government plans for pension reform brought much of France to a standstill for a sixth day, thousands of people gathered in a square just down the street from the Eiffel Tower. It was their second march across the city since the start of the strike (which has now lasted more than a week). To warm up on a chilly winter day, they sang protest songs and ate kebabs.

Many of the demonstrators appeared to be close to retirement. But the crowd was also sprinkled with many young faces, including 25-year-old Nathan Rulens.

Rulens said he had just started his first full-time job in September as a high school economics teacher and had never joined a demonstration before. But even with retirement still a long way off, he had decided the movement against pension reform was a cause worth fighting for.

Like most French adults under 40, Rulens said he thinks pension reform is a good idea. But also like many under 40, he believes the current government’s approach to reform is unfair.

“What is problematic with this reform is that it is based on equality, but it’s not really equality.”

“What is problematic with this reform is that it is based on equality, but it’s not really equality,” he said.

Related: The ‘forgotten victims’ of femicide in France: Women over 65

The current setup, which was put in place in 1945, includes dozens of separate categories that dictate the size of a French worker’s pension. That means that some types of workers are entitled to a much higher pension than others. The government wants to simplify things, so there’s one category for everyone based on how long someone has worked and how much they earned. People could still retire at the current legal retirement age of 62, but everyone would have to continue working until they’re 64 to collect a full pension.

The changes would only apply to workers who are currently under 45. But people are worried the reforms would cost them a lot of money. Rulens expects it could cost him as much as $900 a month when he retires. He said he’s not confident he’ll have a pension at all.

“That’s also why I’m protesting right now. To have a little hope to have a pension one day in my life. But I don’t know. If we continue like that, I don’t think I will have a pension.”

The French government is trying to convince people that achieving fairness and equality is its main goal in overhauling the state pension system, and that everyone will be better off.

“The government’s ambition is social justice,” Prime Minister Édouard Philippe said on national television this week. “There is no hidden agenda.”

Pension expert Hervé Boulhol, who heads the pension division of the Organization for Economic Cooperation and Development, agrees that workers will be better off if the government can successfully implement its plan.

Boulhol said the French system is so complex that most people can’t get a good picture of what their retirement benefits will look like.

“With the reforms, this will be very simple and if I think of the way young people should think about, it is something that should be very welcome.”

“With the reforms, this will be very simple and if I think of the way young people should think about, it is something that should be very welcome,” he said.

But there’s a risk to making change and, when it comes to money and retirement, the French are highly risk averse. On average, they save 15% of their income — twice as much as Americans and more than in almost any other developed country. Most of those savings go into safe investments such as low-interest government bonds. Almost none of it is earmarked for retirement.

Boulhol says that’s because the French are already required to contribute 27.5% of their gross salary to the state-run pension system. In return, retirees receive an average of around 75% of pretax earnings, one of the richest retirement benefits in Europe.

“People do not prepare in the sense of, ‘Oh yeah, at one stage I will be old and I need to make private savings and or invest in a 401k plan,’” Boulhol said. “The state of mind is you contribute a huge amount, which is 27.5% of your gross wage and you will receive a pension from mandatory schemes down the road.”

The government is encouraging higher-risk investments in private pension plans to make up for any shortfall down the road. But Boulhol said that with mandatory pension contributions already so high, and tolerance for financial risk so low, it’s hard to imagine many people doing that.

French unions say they will remain on strike until the government drops its plan for reform, even if that means continuing the shutdown through Christmas. And what the French government may have underestimated is the growing anger among young French people over inequality.

At just 25, Rulens admits retirement isn’t his top concern. He said he also decided to protest because he’s frustrated with the government’s pro-business economic policies. He suspects pension reform is just one more way to erode the social safety net.

He said the future he does want is a return to an older version of France that was more inward-looking and stood up for ordinary people.