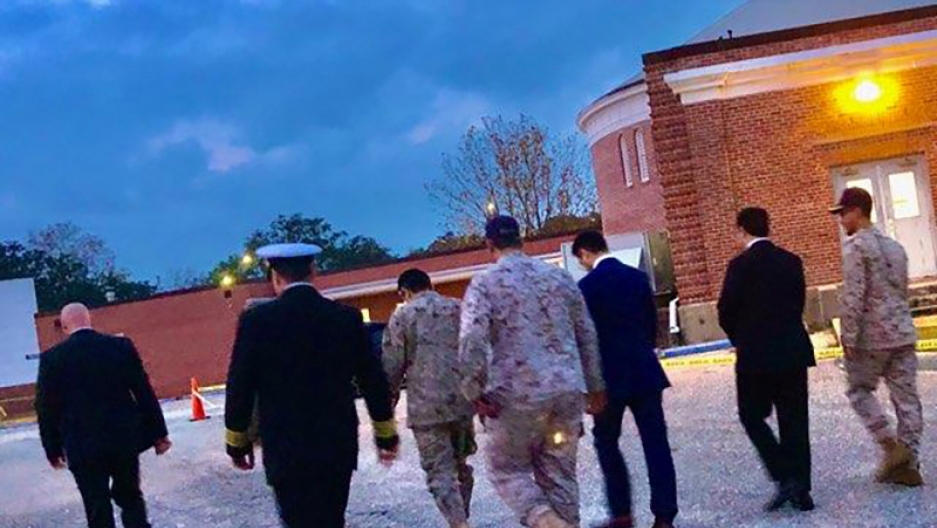 Saudi Arabia Defense Attache Major General Fawaz al-Fawaz and his embassy staff and other officials arrive to meet with Saudi students who remain restricted to the Naval Air Station in Pensacola, Florida, Dec. 9. 2019.

Following the shooting attack by a Saudi Air Force officer that killed three people on Dec. 6 at the Naval Air Station in Pensacola, Florida, Saudi Arabia is taking this moment to remind Americans of the special US-Saudi relationship.

On Thursday, Dec. 12, the Saudi ambassador to the US, Princess Reema bint Bandar al-Saud, met with members of the Pensacola Naval Air Station command and, according to the Saudi embassy, "reiterated her condemnation for this horrific attack." She promised to provide "any assistance possible to accelerate the investigation."

Investigators for the FBI have said they believe the shooter, Mohammed al-Shamrani, acted alone. Following the Pensacola attack, the Pentagon suspended operational training for all Saudi military students in the United States.

Approximately 900 Saudi students — out of about 5,200 foreign military trainees across the country — are affected by the suspension, which includes an indefinite halt on all flight instruction, firing range training and all other operations outside the classroom. The deadly attack has raised questions about the vetting processes and the purpose of these programs.

The Defense Department was quick to say that the suspension was out of caution, and not a shift in policy.

"These types of program exchanges are very important to our national security," said Secretary Mark Esper on Dec. 8. He told Fox News that the Pentagon would review vetting procedures for foreigners on American military bases, but would maintain the training programs. "We have something that our potential adversaries such as Russia and China don't have, which is an elaborate system of alliances and partnerships. And the ability to bring foreign students here to train with us to understand American culture is very important to us building those long term relationships that keep us safer," he said.

Related: Cheap drones are changing the calculus of war in Yemen

The Embassy of Saudi Arabia is framing the shooting and FBI investigation as an opportunity to reiterate the importance of Saudi-US ties. Embassy spokesperson Fahad Nazer spoke with The World's Marco Werman.

Marco Werman: What kind of blow is it to Saudi Arabia to have an event like this happen at the hands of one of your officers in the training program? Is it humiliating?

Fahad Nazer: Some of our critics have argued that this terrible incident should lead to a broader debate about Saudi-US relations and I actually welcome this opportunity. That's frankly why I'm here. I would argue that the security and military cooperation between our two nations has actually saved the lives of thousands of people in the United States, in the kingdom and elsewhere.

So, for example, I'll give you just two quick examples. In 1991, American and US soldiers expelled Saddam Hussein's invading army from Kuwait. More recently, Saudi Arabia flew the second-highest number of sorties in the US military coalition against the terrorist group that calls itself the Islamic State.

Are you saying Saudi Arabia's flown more sorties than the United Kingdom in the fight against ISIS?

Well, I won't argue about the actual numbers, but we flew a lot of missions. And not only that, but I would argue that Saudi Arabia actually considers itself at the forefront of the international community's effort to counter terrorist groups for many years.

The shooter involved in this incident who died, Mohammed al-Shamrani, he was a second lieutenant in the Royal Saudi Air Force. We also learned that on social media he had left a trail of declarations of hate for Americans because of their so-called crimes against Muslims. Why did his commanders send him to the US if he had that kind of history?

Right. So, as I mentioned earlier, the kingdom is fully cooperating with the US investigators, who are trying to determine the motivations of the assailant. I do not want to speak about the assailant or the details of the investigations at this point. We simply don't have all the answers. Going forward, the kingdom will take all necessary measures to reduce the likelihood of something like this happening again in the future.

Fair enough. But what are the criteria for the military training program? What is the selection process?

It is, obviously, a strict selection process. And the fact that — you know, you don't have to take my word for it. The Pentagon issued a statement two days ago saying that 28,000 Saudis have undergone this kind of military training over decades with no incident.

Will Saudi Arabia be investigating this incident independently?

We are certainly looking into it back home.

The Saudi pilots who train in the US will fly missions in the war in Yemen. It's a war that many members of the US Congress strongly oppose, as you know. So how would you argue to Congress, which will certainly be looking at this, for the continuation of this training program and the role these pilots play in Yemen?

The war in Yemen was not a war of choice. It was a war of necessity for us. We are doing all we can to support the internationally recognized legitimate government of Yemen to regain control over their country. We are supportive of a peaceful and political resolution. But this war began when the Iranian-backed Houthi rebels took up arms against the internationally recognized government of Yemen. And it will end when they put those weapons down and go back to the negotiating table.

Will these pilots play a role in Yemen and the attacks on Yemen?

The pilots that undergo training will obviously take part in any mission that Saudi Arabia feels is necessary to ensure our national security interests.

Final question: As this tragedy unfolded, some officials quickly pushed the point that Saudi Arabia needs to give the victims money, and President Trump downplayed any need for accountability on behalf of Saudi Arabia. What is Saudi accountability in this case?

Well, as I said at the outset, we extended our condolences to their families and the victims. We extend its condolences to President Trump and American leaders in Congress. We have condemned this senseless act of violence in the strongest terms possible. We are cooperating fully with the US investigators to try to get to the motivations of the assailant. We will take whatever measures are necessary to make sure that something like this doesn't happen again in the future.