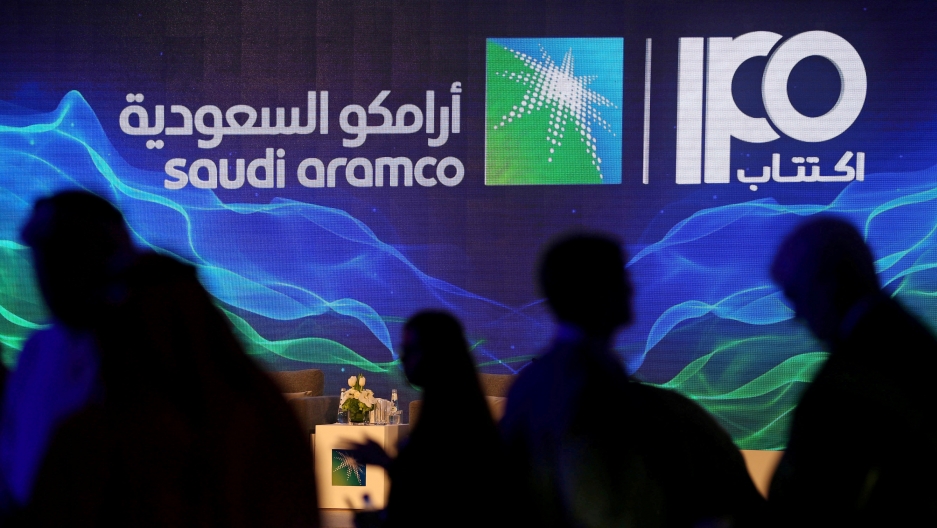 A sign of Saudi Aramco's initial public offering (IPO) is seen during a news conference by the state oil company at the Plaza Conference Center in Dhahran, Saudi Arabia, Nov. 3, 2019.

The Saudi Arabian Oil Company, also known as Saudi Aramco, is offering 1.5% of the company in an initial public offering on the Saudi stock exchange.

Aramco’s financial data shows it made $111 billion in 2018. That’s more than what JPMorgan Chase, Google-parent Alphabet Inc., Facebook Inc. and Exxon Mobil Corp. made combined, as CNBC pointed out.

“Aramco is the most important company in Saudi Arabia. In many respects, it is the entire reason that Saudi Arabia has become such a wealthy and successful kingdom.”

“Aramco is the most important company in Saudi Arabia,” said Ellen R. Wald, author of “Saudi, Inc.,” a book about the history of Aramco. “In many respects, it is the entire reason that Saudi Arabia has become such a wealthy and successful kingdom.”

Aramco started out as an American company, Wald said. It was owned by four major American shareholders. In 1980, it was fully sold to the government of Saudi Arabia, and in 1988, it became Saudi Aramco, the company as we know it today.

Today, Aramco is worth $1.7 trillion and makes most of its money in oil and gas.

So, why is the crown jewel of Saudi Arabia, a state-owned oil company, selling off some of its shares now?

“Oil production is going to become less and less of an interesting business.”

“Oil production is going to become less and less of an interesting business,” said Phillip Cornell, who worked for Aramco from 2014 to 2016. “The issue for Saudi Arabia is how quickly can they front-end their value and try to leverage their national assets including Saudi Aramco and pump that money into programs that might diversify the economy.”

Cornell, who is now a senior fellow with the Atlantic Council’s Global Energy Center, says realistically, global oil consumption is not going to die out anytime soon. But companies are concerned about the long-term prospects of fossil fuels.

“The advancement of things like electric vehicles and other kinds of substitutions for oil mean that demand could start to weaken even in this decade,” Cornell said.

Saudi Crown Prince Mohammed bin Salman knows this. In his Vision 2030, he has laid out plans to reduce the kingdom’s reliance on oil and expand other, non-oil sectors. He has been pouring money into industries such as tourism, entertainment and technology.

Wald says it is not clear exactly where the Saudi government will invest the money from the Aramco IPO.

“The truth is that money is going to go to the Saudi government, and they are going to use it as the desire.”

In the meantime, environmentalists are concerned that money raised in this IPO will allow the oil giant to expand.

“Aramco is the single largest carbon polluter on the planet. Studies show that it is responsible for the emission of more carbon dioxide than anyone else.”

“Aramco is the single largest carbon polluter on the planet. Studies show that it is responsible for the emission of more carbon dioxide than anyone else,” said Patrick McCully, Climate and Energy director for Rainforest Action Network, an environmental organization based in San Francisco.

Last October, a study by The Guardian in the UK found that Aramco was responsible for nearly 5% of all global greenhouse gas emissions in the past half century.

Aramco produced about 13 million barrels of oil a day in the first half of this year. That’s more than four times what Exxon Mobil produced.

McCully sent a letter to the CEOs of the banks that are involved in Aramco’s public offering, criticizing their role in the sale. Nine other environmental groups signed it.

“The world is watching — and the more bank financing of fossil fuels increases, the more public outrage will grow,” they wrote. “If you play a leading role in underwriting this IPO, this will factor into calculations of your banks’ financing, and the trajectory it sets will not go unnoticed.”

“The banks need to start putting some serious pressure on the fossil fuel industry and that means sending a very clear signal by not getting involved,” McCully said in an interview. “If there is a long-term financial future, that’s going to be at the expense of the planet and so eventually, you know, on a dead planet.”

The banks didn’t respond to the letter, but McCully says environmental concerns, as well as Saudi Arabia’s human rights record, have meant Aramco has had to scale down its ambitions for the IPO.

The Saudi crown first mentioned the public offering in a 2016 interview with The Economist.

In the years since, Saudi Arabia has delayed the offering several times for political and logistical reasons.

It also wanted to list its shares on international markets, like in London or New York. But for now, the sale is limited to the Saudi stock exchange.

Aramco did not respond to an interview request. But at a recent conference in London, the company’s CEO, Amin Nasser, acknowledged concerns about oil and climate change.

“Without a doubt, oil and gas will be here for many decades to come. But there can also be no question that climate change is among the most significant challenges facing humanity.”

“Without a doubt, oil and gas will be here for many decades to come. But there can also be no question that climate change is among the most significant challenges facing humanity,” Nasser said, adding that he thinks governments should come up with a more holistic approach to reducing their carbon footprint instead of just focusing on the oil industry.

That’s because as a listed company, Wald said, it will want to increase revenue to attract more investors in the future.