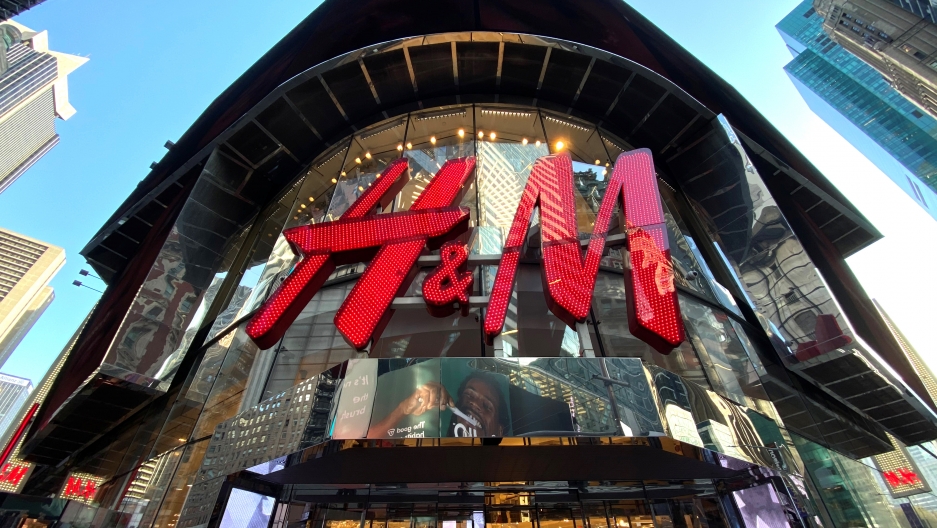 The H&M clothing store, a fast-fashion retailer, is seen in Times Square in New York, US, November 15, 2019.

Americans buy, on average, almost 70 items of clothing per year. And many of those garments are worn just seven to ten times before being thrown away.

This breakneck consumption of clothes is possible because of “fast fashion,” a system in which clothing is made quickly, sold cheaply, and considered disposable, for the most part. And according to Dana Thomas, author of Fashionopolis: The Price of Fast Fashion and the Future of Clothes, this system has consequences for both the workers who make the garments and the planet as a whole.

Of course, clothes were not always so cheap and easily replaceable. Thomas explained that garments cost nearly the same amount today as they cost during the Great Depression, and that is without taking inflation into account. In 2019, for example, an business-attire dress from H&M costs around $25, much like a “secretary special” back in 1935. Except, with inflation, the 1935 outfit would be about $350 in today’s dollars. Essentially, clothes used to be expensive.

According to Thomas: technology and globalization. Ross Perot might have been slightly hyperbolic when he said that NAFTA would create “a giant sucking sound” with all the American jobs going to Mexico, but his basic point turned out to be accurate. It was much cheaper to produce clothes in countries such as Mexico or China or Bangladesh than in the US, where there was unionized labor and workplace protections. Consequently, manufacturing moved away from America.

Companies such as Inditex, which owns Zara and H&M, also started to change their designs faster. They release new clothes every few weeks, instead of unveiling collections twice per year. And fast fashion became increasingly able to “borrow” ideas from high fashion. Clothes, patterns, and ideas, can now debut on runways in Paris or Milan and be Instagrammed, scanned and put into production by fast fashion brands within just a couple of days. Consumers can buy trendy designers for cheap prices which, along with the fact that there is more fashion available, leads them to buy lots of low-priced clothes. Hence, Americans’ haul of 70 items of clothing per year.

So what are the consequences of fast fashion?

To start, when companies moved garment production to Asia, they left behind a lot of American workers. The clothing industry has not historically been a haven for good jobs or safe workspaces, free from exploitation and child labor, but by the middle of the 20th century, American garment workers had unions, workplace protections, and relatively decent salaries. Thomas also points out that the garment industry was an integral part of many towns and cities.

In Blue Ridge, Georgia, Levi’s once employed much of the town.

“They also donated books to the library, paid for the lights on the football field - they bought the jaws of life for the fire department, they sponsored the little league teams,” she said. After 40 years, Levi’s moved its plant overseas, and that way of life vanished.

Garment workers in places like Vietnam and Bangladesh, who replaced their American counterparts, were not treated well. They were paid a fraction of what American workers would have been paid, which allowed companies to sell clothes cheaply and make massive profits.

Thomas recalled that, when she was doing research, “the second richest person in the world, after Bill Gates, was the owner of Zara [Amancio Ortega]. And he was worth $68 billion.”

At the same time, she met garment workers in Bangladesh who were paid $68 a month.

Ortega “was the second-richest man in the world, and he had made his fortune on the fingers of these people who were being paid $68 a month, and couldn’t afford to house and feed and clothe their families,” she said.

The safety conditions that the workers experience are often terrible, as evidenced by the tragic Dhaka garment factory collapse in 2013, in which over 1,000 people were killed. And according to UNICEF, exploitative child labor remains a big part of the fashion supply chain.

There are also significant environmental concerns. Clothing production accounts for an estimated 8% of global greenhouse gas emissions, and rivers can be destroyed by chemical runoff caused by garment manufacturing.

“I saw [a river] in Ho Chi Minh that was next to a former jeans processing plant,” Thomas said. “The river was dead. It was thick and black like tar because all this synthetic indigo had been dumped in there… and it killed the river. It was nasty and it smelled horrible. I thought I was going to be ill on the spot. And that was not uncommon in Asia,” she added.

Is there another way to buy clothes? Thomas thinks there is.

“I do believe that when you find out why that t-shirt costs $12... what that means, that the $10 t-shirt means the person who made it was paid 10 cents. That they can’t even afford to house, clothe, or feed their families. That it’s probably been dyed with toxic chemicals," she said. "Once you know that, you go, ‘Oh my God, I had no idea. Maybe I won’t keep investing in this.’”

Thomas thinks consumers should advocate for “slow fashion,” which includes clothes that are ethically and sustainably made. Though garments might have a higher price point, they will also be much higher quality.

“Yes, that t-shirt may cost $50,” Thomas said, “but it’s going to last more than five times longer than the one you just bought that’s just a crummy white t-shirt for $10. And it’ll feel so much softer and better.”