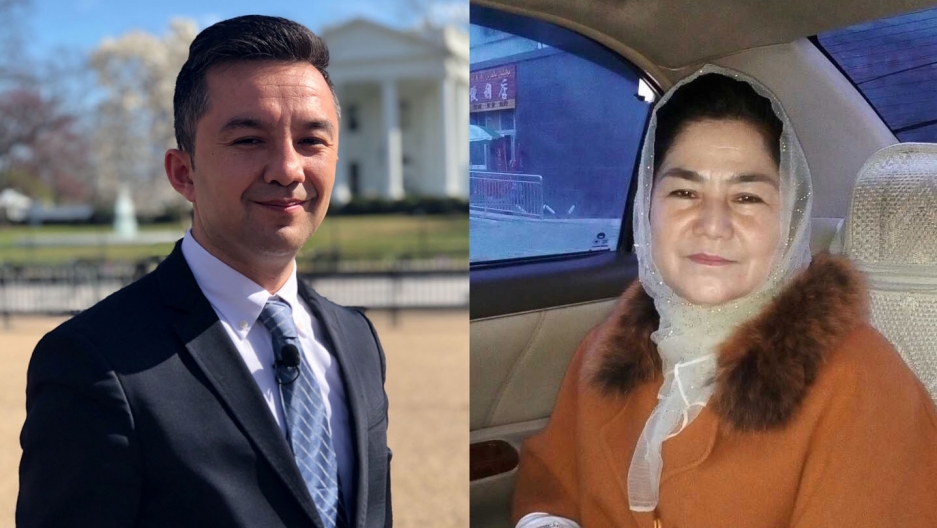 This composite shows Uighur activist Ferkat Jawdat in front of the White House in Washington, DC, on March 28, 2019. His mother Minaiwaier Tuersun is pictured on the right shortly before she was detained in Xinjiang, China, in early 2018.

Courtesy of Ferkat Jawdat via Reuters

The US House of Representatives passed the Uyghur Human Rights Policy Act on Tuesday. It demands that the White House take a tougher stance opposing the mass detention of ethnic Uighurs in western China. And it calls for additional sanctions on Beijing over the forced detentions of up to 2 million Uighurs, most of whom are Muslim, in "re-education" camps. The bill now goes before the Senate.

In response, China's government is lashing out at the US. China's Foreign Ministry says the legislation "wantonly smeared China's counter-terrorism and de-radicalization efforts."

Uighur activists disagree. Among them is Ferkat Jawdat. He's a Uighur American who lives and works as a software engineer in Virginia.

Jawdat says the US legislation will bring hope to people like his mother, who was recently detained by Chinese authorities for 15 months.

Jawdat was on Capitol Hill on Tuesday to watch the bill's passage. He spoke to The World's host Marco Werman about what it means for Uighurs detained in China and their loved ones.

Marco Werman: Ferkat, what does the passage of this bill mean for your friends and relatives who are locked away in detention camps? Is it just a symbolic act?

Ferkat Jawdat: It is a huge step, especially for the people back home. We were kind of worried that they couldn't know about the bill. But actually the Chinese government did the job for us — like, they just reported on all of their news channels, the radio stations in the whole China. So I hope the Uighur people, they are listening. They are knowing what's really happening in the US. So it will give them at least some hope. I was trying to tell my mom, but I was scared myself, too. But hopefully she will know, from the Chinese government, at least.

In "re-education camps," is there information that's free-flowing? Do people get to watch uncensored TV? Would they even know about this?

It will be censored, but people, they know what's really happening. I think they can pick up some signals. They can pick up some messages through those propaganda, at least. I really wanted to talk to some people in the region to see what they really think. But it's impossible for us.

And why is it impossible? Is it because a lot of them are detained?

That's one reason. And the second reason is, even though I can't talk to my mom, she was detained more than 12 months in the camp and then more than three months in the prison. She was released because of international pressure. I can talk to her right now, but her cell phone is monitored by the Chinese police and if we touch any sensitive topics or points [considered controversial] in their dictionaries, she will get in trouble the next day. When I call her I can't even say, "Salaam aleikum." And then we cannot say, "Inshallah" or we cannot say "mashallah" or any kind of religious words. So I just start my conversation by, "Hi, Mom. Hello, Mom. Like, How are you?" But before that, before all this started, like the first word we say is "Salaam aleikum." It's just "peace be upon you."

No. It's not really about the terrorism or extremism. It's about the eradication of identity, history, culture of one nation, one group of people.

So you're in Virginia now. But the official arm of the Chinese government has labeled you, Ferkat, a terrorist because of your activism. What does it mean, actually, for you, in your day to day life?

Sometimes it's scary. Sometimes it's funny. If any Uighurs tried to speak out for their parents or family members or for the people, they all get labeled as terrorists, extremists or a separatist. But I'm not a terrorist. I'm just the regular Uighur American. Just because my mom was locked away more than 15 months, I just started speaking out to save her.

Why do you think your mom got caught up in all this? Do you think she was an activist of any sort? Did she make herself especially public?

No. She was a teacher before I was born, and I'm the oldest. So once she had me, she just quit her job to became a full-time mom. My father came to us in 2006, and then we all tried all the legal ways to bring her to the US. She's not really a religious person. And then she doesn't wear a scarf. And then she asked me to stop calling her, I stopped. But after a couple of days she just calls me back because she's a mother, and then she's been living by herself in an apartment. She has to wake up by herself. She has to eat by herself. She has to sleep by herself. She just couldn't take it. She missed us so much. And then she just calls us back. But she doesn't say anything. She [is] just there. And she told me a couple times that she's in trouble just because of talking to us. But I talked to her many times and I told [her] many times that, "Mom, it's not a crime to talking to your family members." But she was detained. So it's not because of what she did before. It was just because of having contact with anyone who would travel to abroad.

Ferkat, if you could have an uncensored conversation with your mom, what would you say?

This interview has been condensed and lightly edited for clarity.