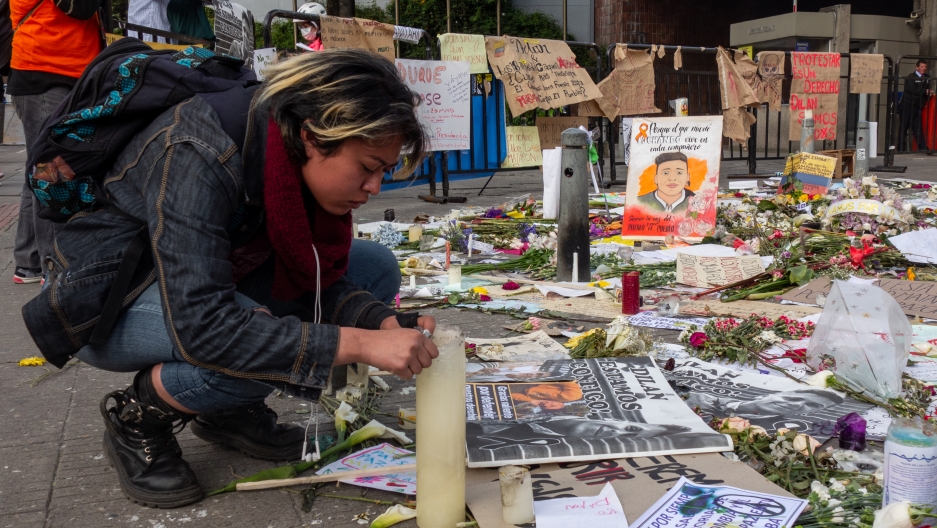 A student from Bogotá lays candles at San Ignacio Hospital where student protester Dilan Cruz died of brain injuries after being shot with a projectile by riot police. It is one of two memorial sites and rallying points in Bogotá alongside the place where the fatality occurred in central Bogotá. Photo taken on Nov. 30, 2019.

After nearly two weeks of protests, a coalition of student and workers’ unions have called for another national strike in Colombia on Wednesday. The movement, which seemed to be slowing down, has been reignited by the Nov. 25 death of an 18-year-old protester, Dilan Cruz, at the hands of Colombia’s riot police.

Cruz, a young, relatable, middle-class student, is widely seen as a martyr for being killed by state forces while peacefully demonstrating. He has become the face of the movement, and those both for and against the demonstrations have politicized his death.

The fatal blow that took his life sparked a critical question among Colombians: Is Cruz yet another innocent victim of brutal security forces, or a troublemaker who paid the price for his irresponsible actions?

Many residents in Bogotá, the capital, are still grieving Cruz's death as they plan for more protests. At a busy, congested road in central Bogotá — the spot where he was killed by riot police during ongoing mass protests that have rocked Colombia since Nov. 21 — young and old congregate, lay flowers and light candles to illuminate loving messages left in his absence.

San Ignacio Hospital where Dilan Cruz succumbed to brain injuries has become a memorial site where the public lay flowers, leave messages, light candles and pause in his remembrance. It has also become a meeting point for protests, in Bogotá, Colombia, Nov. 30, 2019.

“He was brave and an inspiration,” said Gabriela Vargas, a 22-year-old student. “We need more Dilans in Colombia.”

Cruz is not the first student to die during protests in Colombia, nor is he the only fatality in this wave of demonstrations: Four civilians and three police officers have lost their lives so far. But Cruz leaves a unique legacy.

“He’s only one student, but he represents an entire people,” said a mourner visiting the memorial who asked not to be named. “This deep pain is felt by everyone.”

Some stood solemnly, their eyes welling up with tears. Others were incensed by his death.

“Dilan didn’t die, Dilan was killed,” some repeated angrily, banging pots and pans and blowing whistles while cars honked their horns in solidarity.

Cruz died following a traumatic brain injury, according to news reports. He was struck in the head by a projectile fired by riot police when taking part in popular protests against the increasingly unpopular president, Ivan Duque, and his government.

In early October, workers’ unions arranged the Nov. 21 demonstrations against proposed economic reforms. (Duque, for his part, denied supporting the measures.) But the protests have since snowballed into an unprecedented mass movement — mostly peaceful — which has shocked parts of Colombia and continues to dominate the national agenda almost two weeks later.

Hundreds of thousands have flocked to the streets to march, dance, sing and clang pots and pans together to protest myriad issues, ranging from a slow and patchy implementation of 2016’s peace deal with FARC guerrillas, to the routine killing of Indigenous and social leaders, a struggling economy, political corruption, inequality, and discussed tax and pension reforms.

The government’s initial response was swift and heavy-handed with the deployment of riot police to break up demonstrations across the capital, and the declaration of the first military curfew in decades.

Following Cruz’s death, Duque changed tack, agreeing on Monday to negotiate with the committee planning the demonstrations. Wednesday’s marches are scheduled to go ahead regardless.

The demonstrations seemed to dissipate until Nov. 25, when doctors confirmed his death from brain injuries sustained two days earlier. The announcement invoked mass indignation and gave the movement a unified focal point — drawing thousands back onto the streets.

Days away from his high school graduation and considering his future, Cruz’s friends say he was marching peacefully in favor of loans to help students like himself access higher education when he was shot, leaving him in a medically induced coma.

An inquest found that Cruz’s death was a homicide caused by a “beanbag,” a mesh pouch full of lead pellets fired by police to disperse crowds. While a full investigation by the public prosecutor’s office will follow, the debate — fuelled by misinformation — is already well underway.

The moment when Cruz was shot was captured on camera and has since circulated thousands of times on social media, provoking outrage from both those in favor of and against the protests. Viral videos show fully armored riot police marching unprovoked toward Cruz. One officer fires, striking him in the head from behind at a distance of around 40 feet. 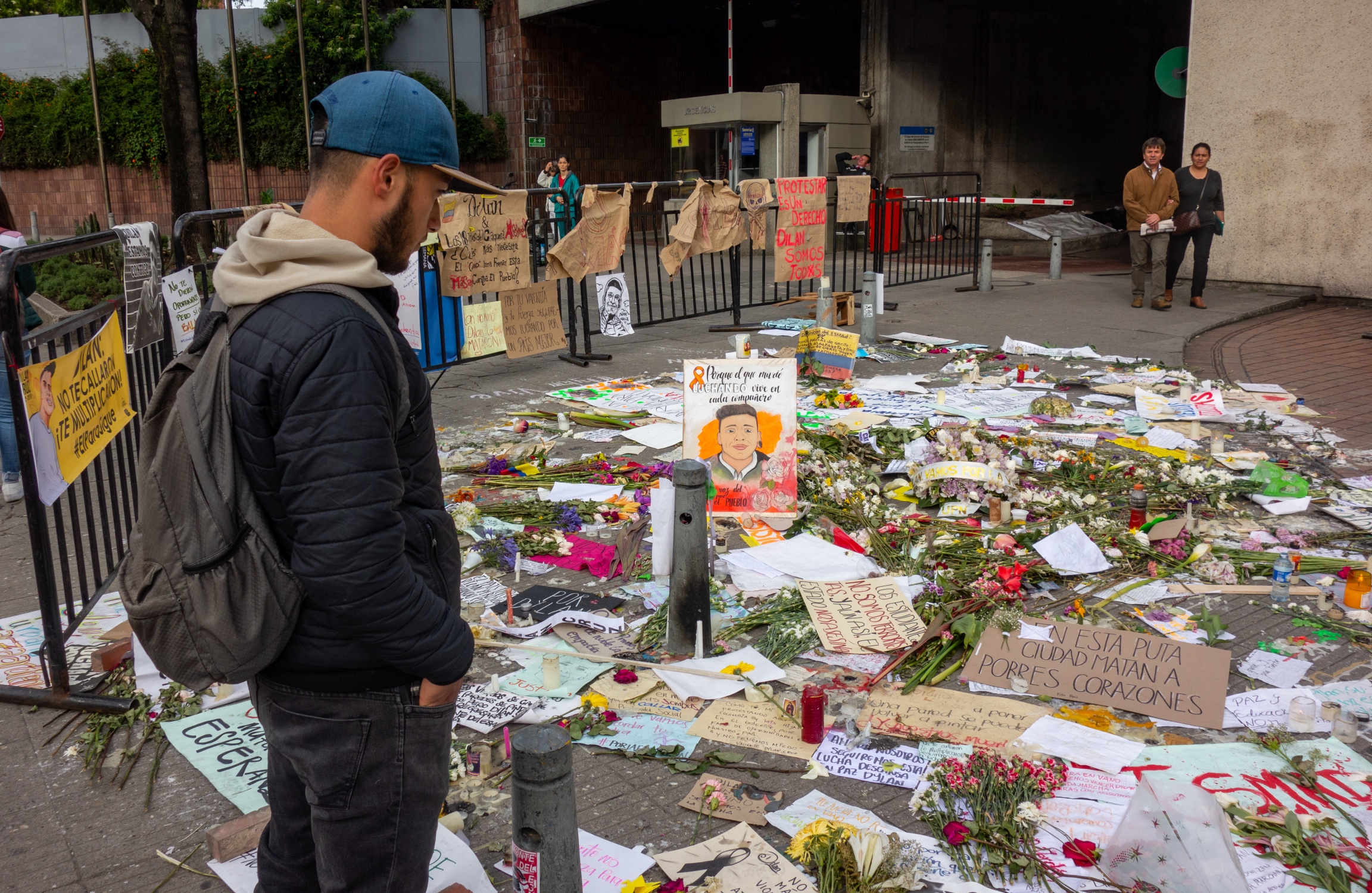 A young man stops to pay tribute to Dilan Cruz at San Ignacio Hospital where he succumbed to brain injuries resulting from a projectile fired by riot police.

Colombian politicians have capitalized on the incident to rouse their supporters. Duque’s allies see the tragedy as a result of the protests and are calling for calm, while his opposition views it as a result of excessive police force and a justification to ramp up demonstrations.

Cruz has been subject to a character assassination from government supporters who seek to undermine the protests.

“It’s been proven that [Dilan Cruz] was a vandal,” Paloma Valencia, a congresswoman from Duque’s right-wing Democratic Center Party told a national radio station on Dec. 1, pointing to videos shared online as evidence.

Images that show Cruz allegedly taking part in the violence were circulated in an attempt to smear him, yet they are actually of another individual. Allegations also circulated that he had thrown rocks at police; videos uploaded by Cruz’s own social media accounts show he was in a group of peaceful protesters holding placards.

The hashtag #PetroKilledDilan trended online following his death — used mostly by supporters of the ruling Democratic Center Party — to allege that leftist politician Gustavo Petro was responsible for Cruz’s death by calling for students to join protests.

A history of excessive force

The tragedy has reopened a debate on the deployment and conduct of state security forces.

Riot police, known by their Spanish abbreviation, ESMAD, have received heavy criticism for their use of the beanbag round, a “less-lethal” weapon which has provoked controversy in protests across the world, including in Hong Kong.

“It's a question of ethics and morality. ... Can an official, stood still under no threat, decide to use it against a student who holds no arms?”

The weapon is internationally legal, but the way it was used violated three of five key principles of the United Nations' Human Rights Guidance on Less-Lethal Weapons in Law Enforcement: precaution, necessity and proportionality, said Andrés Gaitán Rodríguez, a professor of government and international relations at Bogotá’s Santo Tomas University who has researched the use of the controversial weapon.

He also questions the storage and age of materials used due to the atypical way in which the Kevlar, an incredibly durable material, fractured upon impact, perforating Cruz’s skull.

But ultimately, he said, “It's a question of ethics and morality. Can an official, stood still under no threat, decide to use it against a student who holds no arms?”

This question continues to divide Colombia. It has also sparked a wider debate on the right to protest and the future of the controversial ESMAD.

Organizers of the national strike are currently in intermittent dialogue with the government and have listed the dissolution of the ESMAD amongst its list of demands. 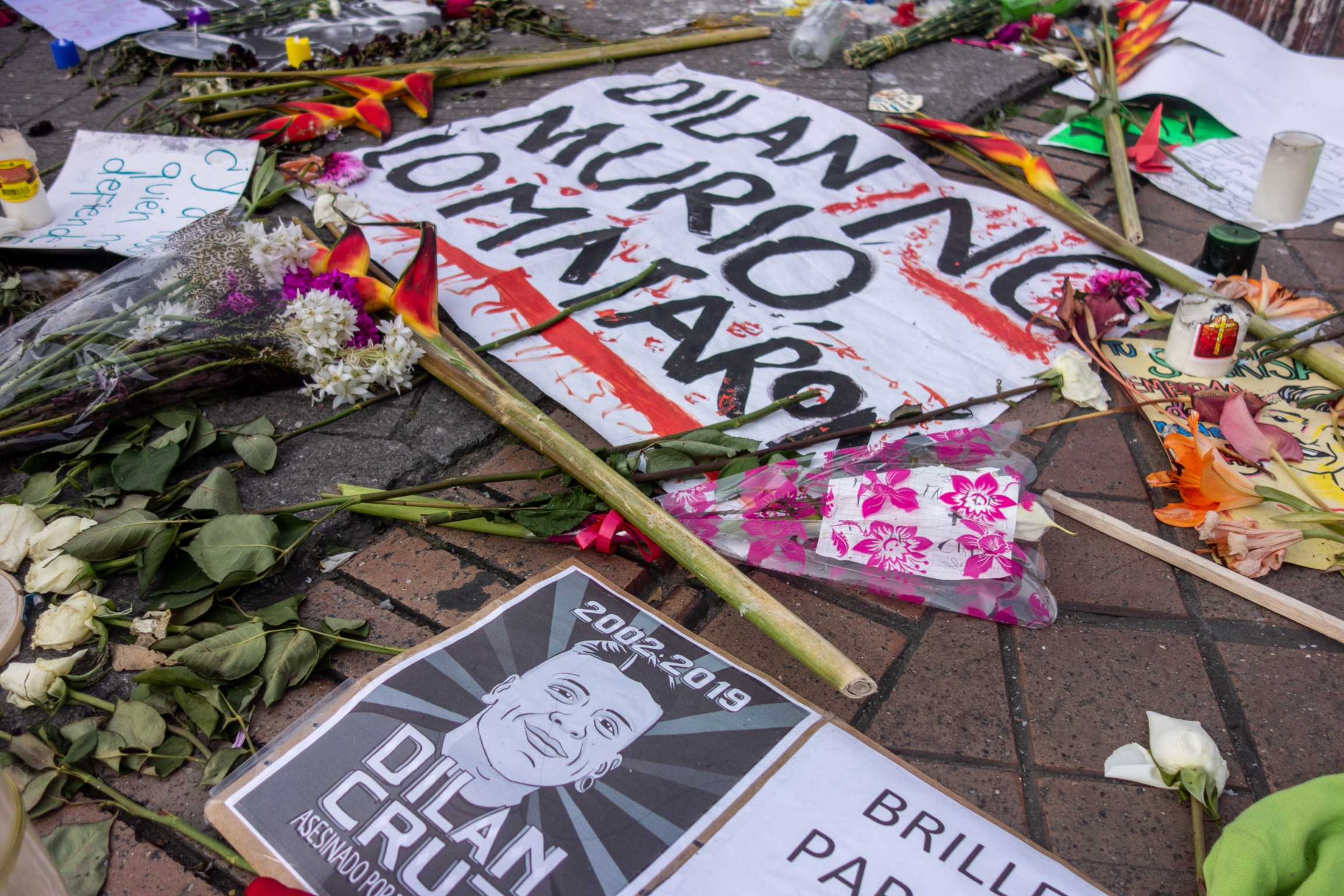 Recent protests have been the largest and most diverse anti-government demonstrations for a generation. Protests appeared to be losing steam but were reignited by the news of Dilan Cruz’s death which gave the movement a unifying symbol and cause in Bogotá, Colombia, Nov. 30, 2019.

Cruz’s tragic death has opened the eyes of the urban masses to the brutal excesses of the forces which have long been felt by Indigenous groups, farmers, union leaders and students, said Adam Isaacson, director for defense oversight at the Washington Office on Latin America.

“The ESMAD does not deescalate situations or distinguish between peaceful protesters and vandals mixed in. Its members are quick to use force and often make situations worse than they have to be. It's the ugly face of the state…But it's an ugly face that regular, middle-class Bogotá residents rarely see."

“The ESMAD does not deescalate situations or distinguish between peaceful protesters and vandals mixed in. Its members are quick to use force and often make situations worse than they have to be. It's the ugly face of the state…But it's an ugly face that regular, middle-class Bogotá residents rarely see,” Isaacson said. “The middle-class Bogotanos who participated in the [protests] got a taste of what 'right to protest' actually exists for more marginalized Colombians.”

Cruz remains the face of a movement, but how long his death will be remembered in a country marked by decades of loss and violence remains to be seen.

“We are marching and will continue marching for various reasons,” said Jeidy Velasquez, a 24-year-old student who protested with classmates on Dec. 1. “But also for Dilan. It will always be about Dilan.”