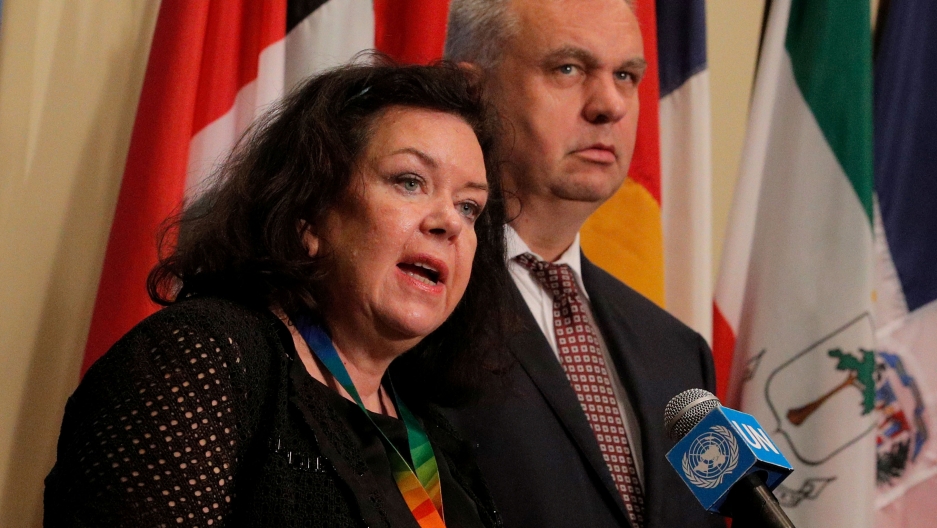 US President Donald Trump and French leader Emmanuel Macron clashed about the future of NATO on Tuesday before a summit intended to celebrate the 70th anniversary of the Western military alliance.

In sharp exchanges underlining discord in a transatlantic bloc hailed by backers as the most successful military pact in history, Trump demanded that Europe pay more for its collective defense and make concessions to US interests on trade.

But he also said the alliance was growing stronger.

"So NATO, which was really heading in the wrong direction three years ago, was heading down," Trump said at a news conference with Macron. "If you look at a graph, it was to a point where I don't think they could have gone on much longer. Now it's actually very strong and getting stronger."

Macron stood by comments he made last month describing NATO as suffering from a lack of strategic purpose akin to "brain death," and criticized fellow NATO member Turkey, which he accused of working with ISIS proxies.

Trump said Macron's criticism of NATO was "very, very nasty" and questioned whether the US military should defend any countries that were "delinquent" on alliance targets for national military spending.

All 29 member states have a target of spending 2% of their gross domestic product on defense and Trump has singled out Germany for falling short of the target.

UK Ambassador to the United Nations Karen Pierce has been watching NATO's 70th birthday party from her perch in New York and spoke with The World's Marco Werman about the future of the alliance.

Pierce said NATO is here to stay. "It's the most successful alliance, I think, in history. It guarantees the security and freedom of its 29 members."

Marco Werman: Ambassador Pierce, today President Trump seemed to embrace NATO even enthusiastically, saying that it has been growing stronger after heading in the "wrong direction." How do you explain the change of heart?

Karen Pierce: I wouldn't, actually, agree that NATO had been going in a downward direction three years ago. I think NATO had some very important strands because it's based on collective defense and that's enshrined in what's called Article 5. And it means an attack on one nation in NATO can be considered an attack against all. And new members continue to want to join it.

Related: NATO agreed Georgia would join. Why hasn't it happened?

But Donald Trump has dismissed NATO in a big way. And even though he sees its vital signs as turning in a proper direction, whatever that means, he still will be found to insult the organization.

I think the president has been particularly focused on the cost of NATO to the US compared to other NATO allies. And I think the important thing about that is that the alliance has agreed to do what's called burden sharing. They made the defense investment pledge in 2014 moving towards spending 2% of GDP on defense. That is what the UK does. So we are standing up to it and we obviously encourage others to do so.

Related: How long can NATO survive without American leadership?

Still, there is a lot of disagreement among member states about what NATO is for and how it should function. What are the key points of friction between the European nations and the US on the purpose of NATO that most worry you — like the real Achilles heels?

I wouldn't acknowledge that it has an Achilles heel, but I think there are legitimate questions about how far NATO should move into relatively new areas of cyber counterterrorism, possibly even space. But I also don't want to give the impression that the threats in Europe have completely gone away. NATO has troops in Estonia for one very good reason, which is the threat from Russia. And I think allies want to talk about how exactly they can deal most effectively with some of these new areas.

I'm glad you brought up those NATO allies on the eastern front with Russia, because President Trump was asked today about whether Russia should be dealt with as a NATO adversary. He said: "I think it's a good thing to get along with Russia. And I campaigned on it. I mean, I'd go into big stadiums — people like it. And I think the Russian people would like to see it too. A lot of, a lot of good can come of it." So, apparently, at Trump's rallies, they like it when he shows his good relations with Russia. The UK and the US do not exactly see eye-to-eye on Russia right now. Where do the two nations differ on how they view the Kremlin?

I don't think it's that we have a difference on how we view Russia. What made a big difference, of course, to the West's view of Russia was the invasion of Crimea. And because of the Salisbury chemical weapons attacks in the UK, for which we judge the Russian military intelligence GRU to be responsible, we probably have fewer automatic connections to Russia, whereas I understand that the Americans probably have more official dealings with Russia, comparatively speaking.

Ambassador Pierce, there's a lot of polling and conventional wisdom that President Trump is widely unpopular in Britain. Why do you think that is?

I wouldn't accept that the president's unpopular in Britain. I think there is a lot of respect in Britain for the US administration. And people are pleased that the US president has visited for the NATO summit. There's huge affection and understanding and respect for America as a whole. That doesn't depend on one individual administration. And it was, of course, cemented during the Second World War and in the NATO alliance that came along 70 years ago. So I think there's an enduring friendship and solidarity there that transcends politics, to be honest.