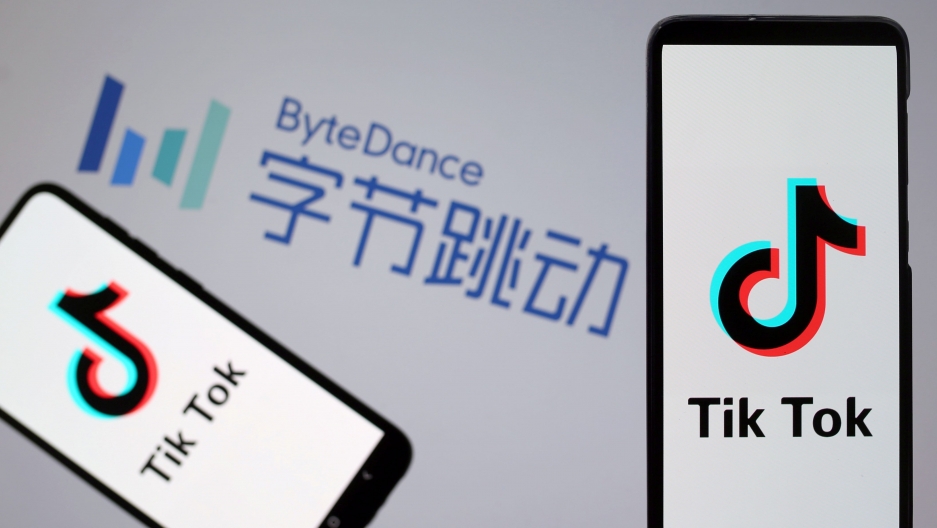 TikTok logos are seen on smartphones in front of a displayed ByteDance logo in this illustration taken Nov. 27, 2019.

TikTok says it’s sorry for removing a US teen’s video criticizing the Chinese government’s crackdown on Uighur Muslims and other ethnic and religious minorities in the country.

In a statement Wednesday, TikTok blamed the video's removal on a “human moderation error.” But the ordeal has reignited concerns that the Chinese-owned, short video app is censoring US-generated content to appease Beijing.

The now-viral video in question was created by Feroza Aziz, a 17-year-old high school junior who lives in New Jersey. At first, the video appears to be a beauty tutorial.

“Hi guys. So, I'm going to teach you guys how to get long lashes,” Aziz says as she holds a pink eyelash curler to her face. “So, the first thing you need to do is grab your lash curler, [and] curl your lashes, obviously.”

Here is a trick to getting longer lashes! #tiktok #muslim #muslimmemes #islam pic.twitter.com/r0JR0HrXbm

But very quickly, Aziz’s tone changes, and the video takes a turn. Aziz tells viewers to put down their eyelash curlers “and use your phone that you're using right now to search up what's happening [in] China,” Aziz says, and then goes on to describe China’s brutal crackdown on Muslims and other religious and ethnic minorities in the country.

The Chinese government is accused of rounding up as many as 1 million people — mainly ethnic Uighurs — over the past three years and locking them in internment camps and prisons across the remote province of Xinjiang in northwest China. Officials in Beijing say the Xinjiang camps are educational training centers designed to prevent Islamic extremism. But experts say recent document leaks from within the Communist Party suggest the Chinese government’s operations in Xinjiang amount to a mass brainwashing scheme designed to force ethnic communities to abandon their culture, language and faith.

Aziz remembers finding out about the situation in Xinjiang through social media. “I thought, this cannot be true,” she told The World. “China can't be doing this to their own people. And I searched up and sure enough, they are ... It broke my heart.”

“I thought, as a Muslim growing up in America, it’s my duty, it's my job to speak about this and to spread awareness.”

“I thought, as a Muslim growing up in America, it’s my duty, it's my job to speak about this and to spread awareness,” she said.

So, on Nov. 23, Aziz took to TikTok, posting the video that blasted the Chinese government for its treatment of Uighurs and other ethnic and religious minorities.

Her TikTok quickly took off. The day after posting the video, Aziz woke up to find out it had gotten more than 1 million views. “I was like, 'Wow, I need to create two more videos on this issue because there's a lot of questions regarding what's happening.' So, I created that.”

Aziz says many young people responded to her videos saying it was the first time they had ever heard about the situation in Xinjiang. She said classmates at her high school approached her in the hallway to thank her for spreading awareness on the issue.

But her excitement was short-lived. About two days after posting her video, Aziz woke up to find that she could no longer access the TikTok app from her phone. But the biggest surprise came a few days after that, when Aziz learned that TikTok had removed her video from the platform.

In a blog post this week, TikTok explained that the first action it took against Aziz — banning her from accessing TikTok from her phone — was because of an entirely different video she had created, and that it was part of a scheduled, platform-wide enforcement on thousands of accounts that had been flagged for violating TikTok’s rules on terrorist imagery.

Under a previous account, Aziz posted a video that featured a photo of Osama bin Laden. The video was intended to be satirical, Aziz says, but it got flagged for violating TikTok’s rules on terrorism or terrorist imagery. TikTok has since acknowledged that this video “was intended as satire.”

This is the “video of Osama bin Laden” TikTok says got Feroza Aziz suspended from the platform. https://t.co/yRpiH9jIaN pic.twitter.com/yzL2FjUjLv

As for the temporary removal of Aziz’s video on Uighurs, TikTok chalked it up to human error. “It's important to clarify that nothing in our Community Guidelines precludes content such as this video, and it should not have been removed,” the company wrote in the blog post. TikTok has since reinstated the video and given Aziz access to her account.

“I think they were trying to silence me about speaking about the Uighur Muslims,” Aziz said. Like many others, she believes she was censored for posting content critical of the Chinese government — an accusation that’s been waged against TikTok in the past, and one that the company denies.

“We have never been asked by the Chinese government to remove any content and we would not do so if asked. Period. Our US moderation team, which is led out of California, reviews content for adherence to our US policies — just like other US companies in our space. We are not influenced by any foreign government, including the Chinese government; TikTok does not operate in China, nor do we have any intention of doing so in the future.”

“We have never been asked by the Chinese government to remove any content and we would not do so if asked. Period,” TikTok said in a blog post last month. “Our US moderation team, which is led out of California, reviews content for adherence to our US policies — just like other US companies in our space. We are not influenced by any foreign government, including the Chinese government; TikTok does not operate in China, nor do we have any intention of doing so in the future.”

But news reports on the company’s content moderation practices tell “a different story,” Republican Missouri Sen. Joshua Hawley said at a Senate Subcommittee on Crime and Terrorism hearing earlier this year. (TikTok was invited to the hearing but did not show up.) Facing the empty chair that had been set up for TikTok, Hawley brought up a report by The Washington Post that claimed executives in Beijing had the final say on whether flagged videos were approved — even for US-based users. “And that’s a problem,” he said.

Earlier this year, the US government launched a national security review of the deal that brought Musical.ly, TikTok’s predecessor, under the control of Beijing-based ByteDance Technology Co. TikTok, like other social media apps, is increasingly becoming a place where young Americans learn about news and current events.

Aziz says Beijing’s alleged influence on TikTok is especially worrying given TikTok’s growing popularity in the US. The 17-year-old says this is why she will continue to speak about the Uighur crackdown and other issues — though maybe not on TikTok.

“I don't think I really want to post on TikTok anymore,” she said. “But at the same time, I don't want this ... to silence me. I want to show TikTok that I will still spread awareness about these issues.”

And, she says, there are plenty of other social media apps she could do that on.