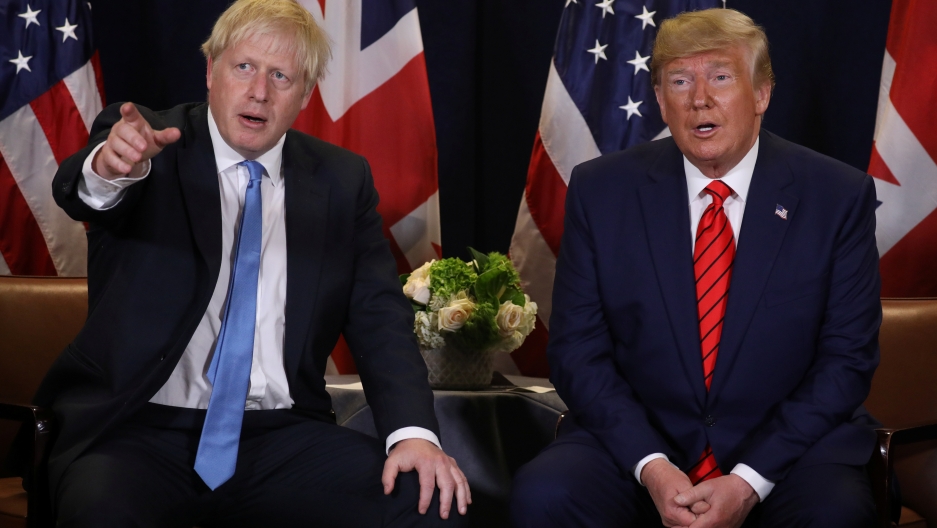 The global economy may have narrowly avoided a recession, with most industrial and financial indicators pointing to a slight improvement between September and October after a sharp slowdown in the middle of the year.

World trade volumes were down almost 1.5% in the three months from June to August compared with the same period a year earlier, the worst performance since the recession of 2008-2009.

Since then, however, most equity and bond market indicators, as well as industrial production surveys, have shown the slowdown has eased.

Related: Boris Johnson’s Brexit deal: What’s in it and how is it different from Theresa May’s version?

Susan "Zanny" Minton Beddoes, editor-in-chief of The Economist, spoke with The World about the link between the current slowdown and the rise of right-wing politics globally, as well as the long-term trade ramifications of Brexit for the United Kingdom.

Marco Werman: How threatening is a global recession to democratic institutions?

Susan "Zanny" Minton Beddoes: If you go into a recession with political frustration and polarization already at the levels we're seeing today, you don't have the tools that traditionally are used to combat a recession. Then, I fear that you could see a much bigger increase in this frustration and anger and you could see really extreme policies. That's the big worry, when you've had frustration even when things are going relatively well in a cyclical sense. When you get a recession and you can't fight it, then you don't have the ability to come together and combat it and we end up in a much worse economic place. The politics could get really ugly.

When you say more extreme politics, give me an example of the kind of thing you're talking about, connect the dots.

Well, look, for example, [at] what happened in Brazil. Brazil had years of frustration with corruption, its deepest recession since the 1930s, and what did they do? They elected essentially a far-right leader. The idea that Jair Bolsonaro would become the president of Brazil five years ago, I think would have seemed completely implausible. But it was a frustration with the current establishment that led people to go for more extreme solutions.

Boris Johnson and Donald Trump would like their constituents and the world, probably, to believe that the US and the UK can cut this big, beautiful trade deal post-Brexit. What would that look like? And are you optimistic that it would solve the problems that Brexit creates?

There's no possibility that a US and UK trade deal can make up for, in some way, the Brits leaving the single market of 500 million consumers, which is what the European Union is. So, from a British perspective, it's a second-best option. Of course, I'm a free trader at heart. I think a big trade deal would be a very good idea and there are potential areas where there's an enormous amount of gain to be had from barriers being cut on both sides. But I'm much more skeptical about the politics of this actually happening for two reasons. One is that we're coming to an election year in the US. Even if you could agree on the technicalities of a trade deal pretty quickly, the idea that Congress would pass a trade deal seems to me to be pretty far-fetched right now, before the election in 2020. I just don't see Congress in the mood for passing a very big trade deal. They have a lot of other things on their mind and trade is not terribly popular. And the other is Boris Johnson's current Brexit deal effectively puts up a customs barrier in the Irish Sea. It treats Northern Ireland legally as part of the United Kingdom but practically as part of the European Union in terms of trade. Now, that has driven a "coach and horses" through what's called the Good Friday agreement, which is the agreement that restored peace on the island of Ireland.

"Coach and horses" means it's messed it all up?

That's my little Englishism. I think for many American politicians, they will see that as a really big cost and one that they are unwilling to essentially underwrite. And a few months ago, Nancy Pelosi, speaker of the House, came to London and it wasn't widely picked up, but she made this point and said, "Don't mess with the Good Friday agreement." So, I think that's another reason why actually there will be more resistance in the United States to a trade deal than people are expecting.

Will Brexit, with or without a deal, mark the beginning of the end of the United Kingdom as we've known it? I know that's really hyperbolic, but do you feel Brexit is that consequential?

It seems extraordinary to say that, but it could be. And the reason it could be is twofold. Firstly, the nature of Boris Johnson's deal does essentially put a barrier in the Irish Sea. That to me means that over the years it must surely make a united Ireland more likely. It must from a five-to-10-year horizon, make that possibility much more likely. Secondly, for Scotland, where many people have been agitating for independence, Scotland voted to remain in the European Union. It is now under this deal, being dragged into what looks like quite a distant economic relationship with the European Union, essentially against its will. I think that's going to increase the momentum for the independence movement. So, yes, it does seem extraordinary but your point is not far-fetched. It is certainly possible that 10 years down the road, the consequences of this kind of Brexit could be that the United Kingdom loses Northern Ireland and loses Scotland. The English have their Brexit, but they do so at the price of the union.