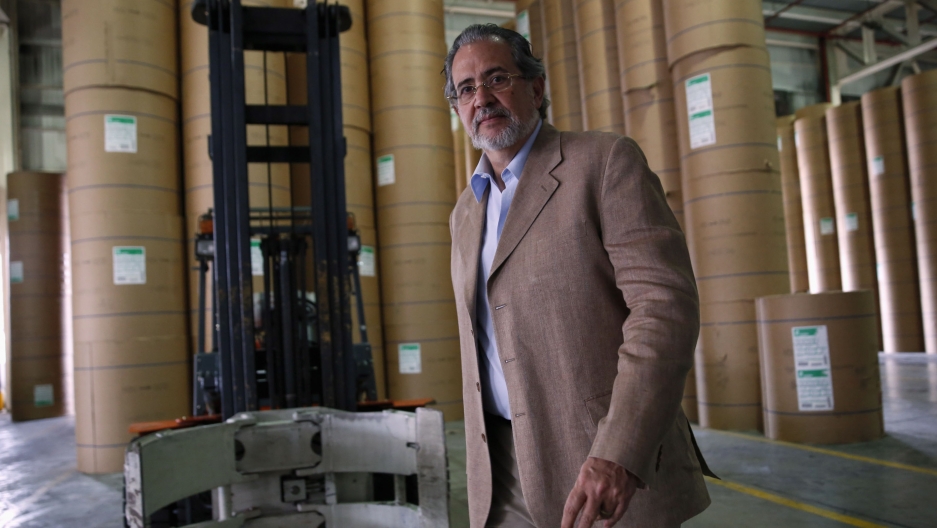 Miguel Henrique Otero, editor and president of El Nacional, one of Venezuela's main national newspapers, walks past paper rolls at the newspaper's building in Caracas on April 11, 2014. Since 2015 he has lived in self-imposed exile in Madrid, Spain.

Miguel Henrique Otero pressed play on the latest podcast from El Nacional, the Venezuelan newspaper he owns and edits. His phone rang a few seconds later, interrupting the broadcast, and he answered while scanning headlines on an iPad.

It would be a typical scene for any harried newspaper editor, except that Otero lives in self-imposed exile in Madrid, Spain, while his staff works thousands of miles away in Caracas.

“From here I can manage the editorial lines, and they know what I think all the time," he said. "These days the communication is very fast, and the internet permits you to be very close to what is going on down there."

More than four million Venezuelans have fled their country’s economic and political crisis in the last five years, most to neighboring nations such as Colombia. But some of Venezuelan President Nicolás Maduro’s most powerful opponents in politics and the media have regrouped in the country’s former colonial power across the Atlantic. Otero is one of several Venezuelan journalists living in Madrid.

Many Venezuelans have taken up residence in Spain because they already have Spanish nationality or family living there. Those who cannot claim Spanish citizenship through family ties or ancestry can ask for asylum, as nearly 60,000 already have. The two countries’ shared language and cultural similarities can help ease their transition.

Otero’s own exile began in May 2015. He happened to be out of the country visiting Israel when El Nacional, Venezuela's largest independent newspaper, republished a story from Spanish newspaper ABC accusing the president of Venezuela’s national assembly of narcotrafficking. Otero got word that Diosdado Cabello, a powerful ally of Maduro, had slapped him with a defamation suit.

Rather than go home to Caracas, he diverted his return journey to Spain. He hasn't returned to Venezuela since.

“If I went back, I wouldn't be able to come out of Venezuela. I would have to present myself at the police every week.”

“If I went back, I wouldn't be able to come out of Venezuela. I would have to present myself at the police every week,” Otero said.

Typically when a political opponent is caught up in judicial proceedings in Venezuela, Otero added, additional “hidden accusations” come to light to tarnish their names and complicate their cases. “In the end, I would be in jail.”

Since moving to the Spanish capital in 2015, Otero has been joined in exile by numerous anti-Maduro figures. They include the former mayor of Caracas, Antonio Ledezma, and the family of dissident Leopoldo Lopez, who has spent time in jail in Venezuela.

Otero was already familiar with Spain, given the similarities to his own culture. Like many of the Venezuelan emigrés who end up here, he was awarded fast-tracked Spanish nationality in 2017. The Spanish government cited his political persecution when conferring his status.

The editor runs his newspaper mostly from his couch in a chic duplex in Madrid’s best shopping district. He said he is aware his existence is a world away from that of his compatriots eking out a living on the streets of Colombia or Brazil, often without legal status.

“Poor people go to Colombia — they don't have a passport,” he said. “Most of the people that come to Spain are middle-class.”

Related: Hospitals are turning into 'cemeteries for migrants' on the Colombia-Venezuela border

Of the 320,000 Venezuelan-born people living in Spain, 90,000 live in Madrid, according to official Spanish statistics.  But given the historical ties between the two countries, Otero said, the Spanish government should “do more” for Venezuelans who struggle to obtain a work permit and are forced to rely on informal connections for accommodation and jobs.

During the Spanish civil war in the 1930s and the poverty of the 1950s, he pointed out, thousands of Spanish families immigrated to Venezuela, some of them on airline tickets paid for by the Venezuelan government.

“Not only could they work immediately, but they were helped by Venezuelans ... Spain was in a very poor condition,” Otero said.

At a recent lunch in central Madrid, Otero shared a table with Diego Arria, former Venezuelan Representative to the United Nations, who was visiting from New York. Arria is spearheading efforts to have Venezuela removed from the UN Human Rights Council. Also present was Fidel Castro’s former brother-in-law, Waldo Balart, who fled Cuba in 1959. All are vocal critics of the Maduro regime co-ordinating their opposition across time zones and continents.

Otero does not mince words when describing the government back home.

“Venezuela is a country kidnapped by a bunch of gangsters, of robbers, of narco-traffickers. That is the situation. It's not like a normal dictatorship,” he said.

His openness is perhaps surprising, considering that his son remains in Caracas, working as the managing editor of El Nacional.

“He has to be there,” Otero said, acknowledging the risks his son takes in remaining in the country while continuing to publish.

Since the Chavez era, Venezuela’s government has bought almost all of the country’s major newspapers in a move widely seen among publishers as an effort to silence dissent. When Otero declined an offer for his publication, the Maduro regime responded by cutting off the supply of paper. The printing presses of El Nacional fell silent for the first time in 75 years in December 2018, and the paper went online only.

Continuing to publish the news has meant lawsuits, attacks on the premises, and targeting by pro-government gangs known as “colectivos,” Otero said. Many reporters have fled Venezuela out of fear for their lives.

El Nacional has adapted by using social media and podcasts to help Venezuelans get around government blocks on its website. Despite the difficulties, Otero said, he and his staff remain defiant.

“We publish everything,” he said.