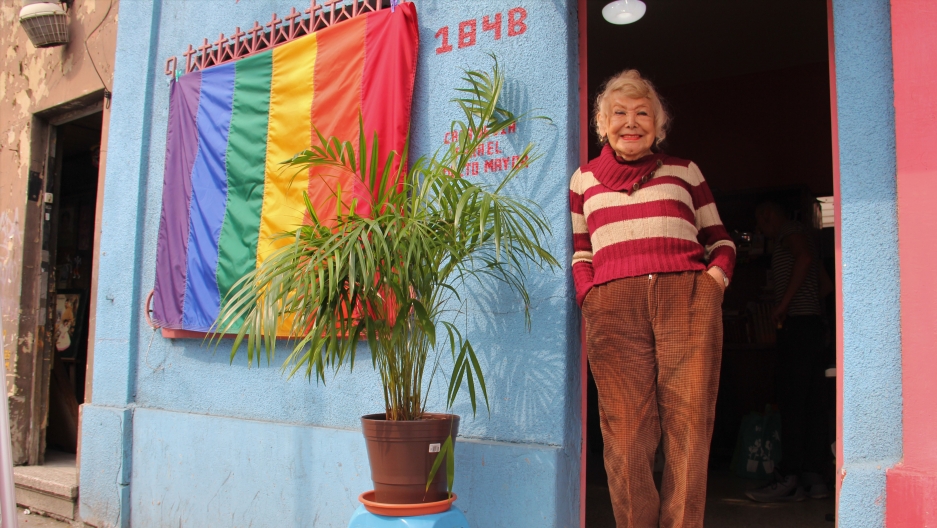 Samantha Flores, a trans woman, stands at the entrance to the Vida Alegre, a day center for older LGBTQ people in Mexico City that she cofounded.

Gustavo Pérez's memories of growing up as a gay man in Mexico City are scarred by discrimination and struggle.

Still, he said, his youth was a happier time. The 80-year-old has struggled with something even harder in his old age: loneliness.

Pérez often spent several days with no one else to talk to — until a few months ago, when he walked by a rainbow flag in his neighborhood and discovered it was a day center for LGBTQ senior citizens. It has now become his second home.

Related: Gay marriage is legal in Mexico, but Mexicans are still fighting over whether it should be allowed

“I’m going to die soon, so I need to use my time well,” Pérez said earnestly, dressed in a black leather jacket, matching knee-high riding boots and dyed jet-black hair. “I need to talk to other people.”

The center, called Vida Alegre, Spanish for "Happy Life," was founded just over a year ago by Samantha Flores, an 87-year-old transgender woman. Nothing similar exists in the country. 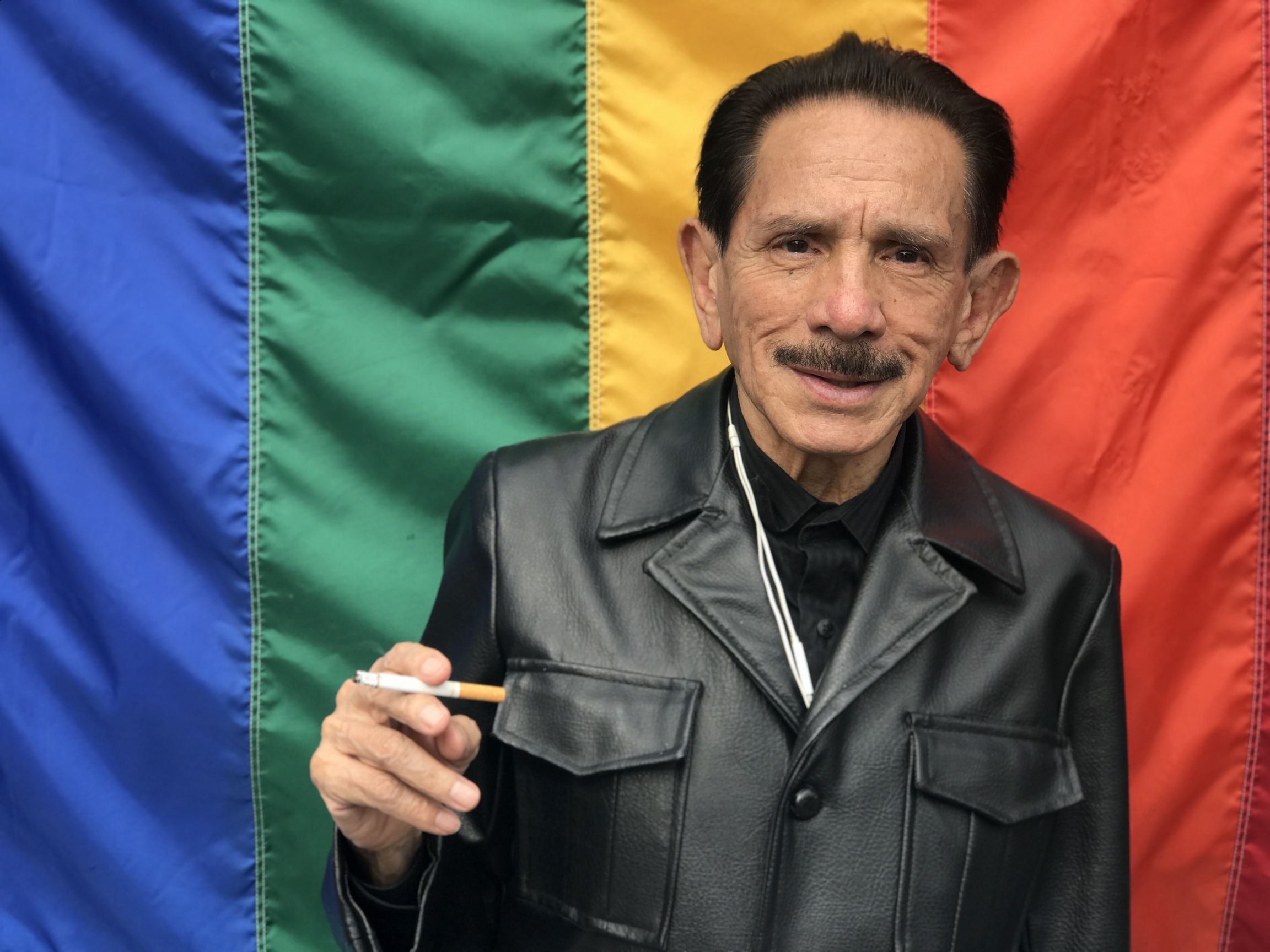 Flores, a prominent, longtime LGBTQ rights activist in Mexico City, said the need for the center was always obvious. Through her work, she would meet many older LGBTQ people who had mental health issues stemming from loneliness and family rejection.

“Loneliness is a big problem. ... I’ve had people come in, older gay men, sobbing and pouring their hearts out to me about how unhappy they are.”

“Loneliness is a big problem,” she said. “I’ve had people come in, older gay men, sobbing and pouring their hearts out to me about how unhappy they are.”

The center, she added, is an “oasis” for many who visit.

The space is just one room, separated by a giant bookshelf. One wall is affixed with a crucifix, an important item for Flores, who is Catholic. Some people gather to watch films, while others prefer to sit and chat. Around 20 people were there on a recent afternoon. The week before, over 50 people crammed into the small space to watch a documentary about Flores’ life.

Two computers sit along one wall where members learn how to type and use the internet. The backroom can be rearranged to host their cinema club or gatherings over food.

Another wall was recently decorated for the recent Mexican Day of the Dead holiday, where members commemorated famous LGBTQ people in Mexico who have died.

“They usually don't have children, and many of their families have disowned them, so they need to turn to families they have chosen themselves or friends for social contact."

Older LGBTQ people are more likely than their heterosexual counterparts to age in solitude, said Arturo Arcos, director of Bienvejecer, an organization dedicated to bettering the quality of life for older people in Mexico City.

“They usually don't have children, and many of their families have disowned them, so they need to turn to families they have chosen themselves or friends for social contact,” said Arcos, who helps Vida Alegre organize events and activities for its members.

In the case of gay men, many lost friends and partners during the AIDS epidemic.

“There are many that suffer from post-traumatic stress [disorder] as a result, and there are some who have been living with HIV for over 20 years,” he said. “Others have been taken in by their families, but under the condition they go back into the closet to ‘avoid problems’.”

“I remember one case. I told him, ‘You’re going to see the psychologist, and you’ll be smiling within a month’,” Flores said. “I saw him three weeks later and said to him, ‘You beat me. you’re already smiling’,” she said with a laugh. 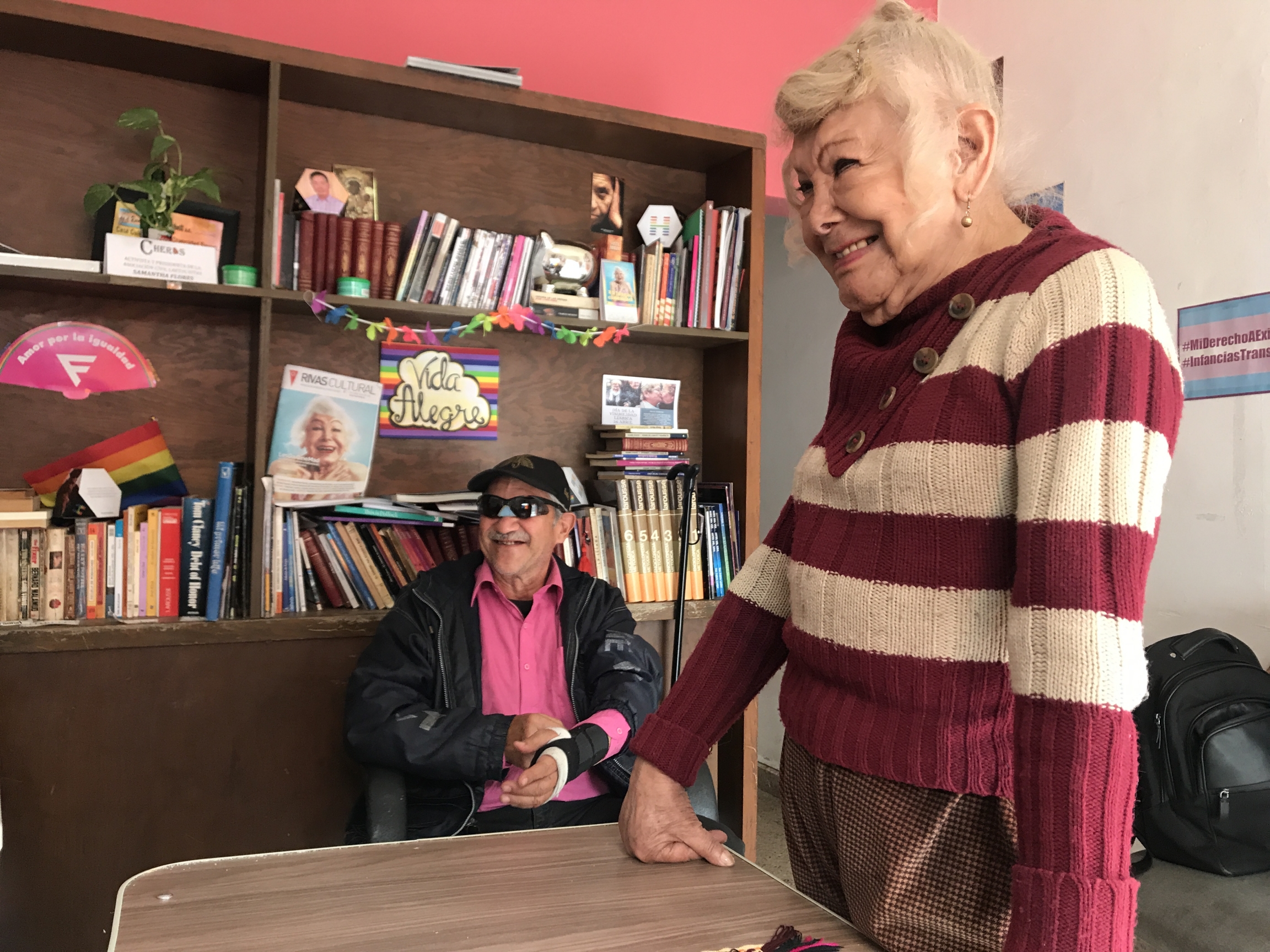 A lifetime of discrimination

Although recent advances have been made for LGBTQ rights in Mexico, it is the second-worst place for homophobia and discrimination in Latin America, according to Letra S, a human rights nongovernmental organization in Mexico. Between 2013 and 2018, 473 members of the LGBTQ community were murdered because of their sexual orientation or gender expression, according to the group’s most recent report. Over 50% were transgender women.

Across Latin America, over 1,300 LGBTQ people have been murdered in the past five years, according to recent data collected by a regional network of gay rights groups. Mexico, Colombia and Honduras accounted for nearly 90% of all deaths in the region.

In a particularly egregious recent case, a trans woman was brutally murdered this month in the Iztapalapa district in Mexico City. Last year, a trans woman and beauty queen known as Alaska Contreras Ponce was murdered in Veracruz, Flores’ home state.

Many of the people who frequent Vida Alegre have experienced discrimination all their lives.

For Pérez, the targeting due to his sexual orientation began in the 50s, when Mexico City’s underground gay scene first took off.

“The police were harsh and they would lock you up for two or three days. They’d say you had no morals,” he said. Today’s youth have it easier, he added. 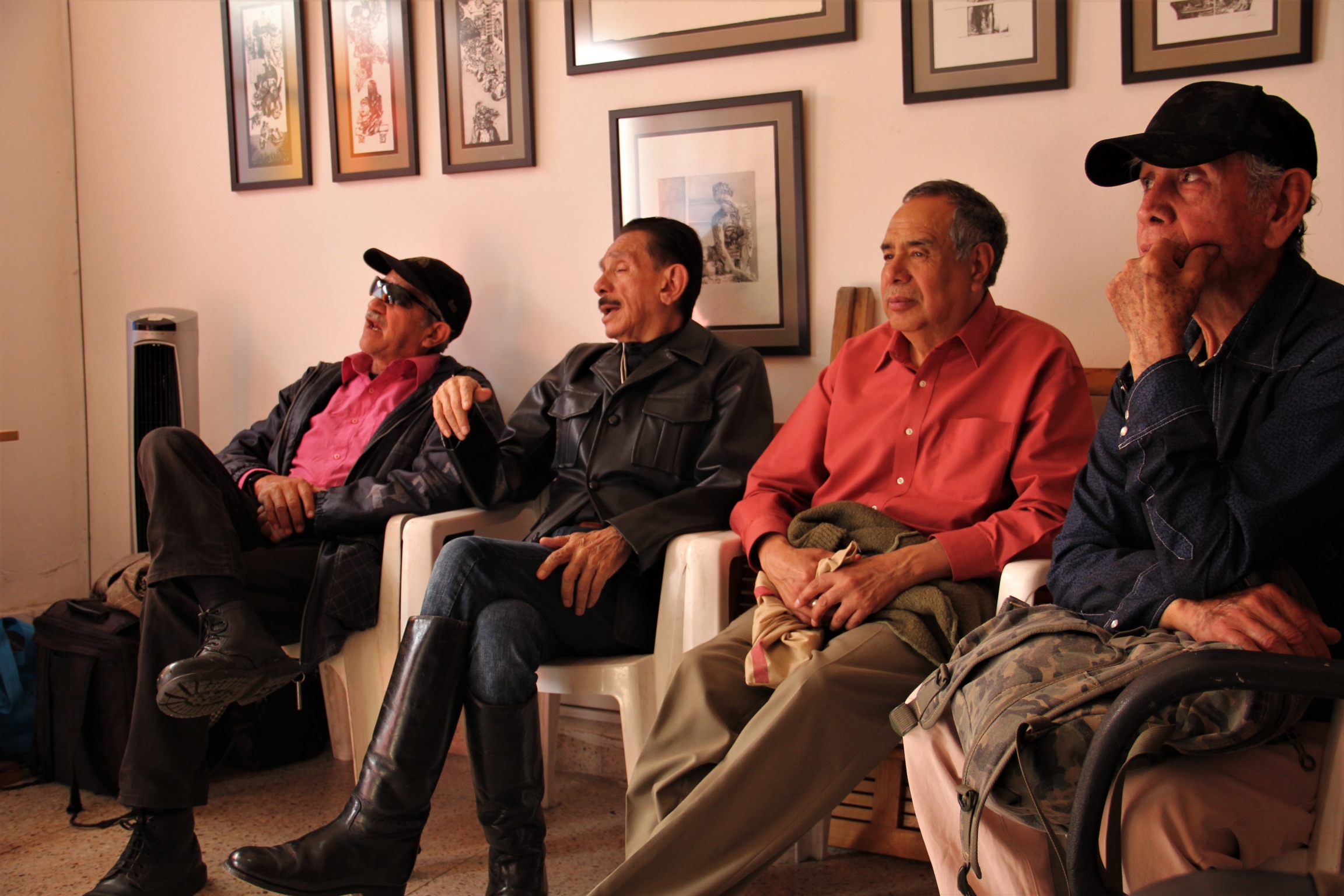 Gustavo Pérez, dressed in a black leather jacket and boots, chats with other Vida Alegre members.

As a trans woman, Flores has also encountered frequent name-calling. Throughout her life, she said, she has been called “faggot, weird, monstrous and sick.”

Flores was born in Orizaba, a town in the Gulf Coast state of Veracruz. She left home at 18 and spent most of her working life in the hotel industry. Out of respect for her father, Flores said, she kept her male appearance for 38 years but became Samantha after he passed away.

After retiring, she volunteered for over 20 years in a shelter for children with HIV.

A friend raised the idea of a shelter for older LGBTQ people after seeing how much she enjoyed working with children. She was intrigued, but shrugged off the idea, until one day he invited her to lunch and placed an envelope containing $5,000 in her hand.

“He said, ‘This is for your shelter.’ I was completely taken aback, but having some money then pushed me to go ahead with the idea,” said Flores, her white hair neatly tied up in a bun.

After a two-year bureaucratic nightmare, she finally obtained the legal papers she needed to open the center. A friend, Augusto Molina, quit his job to help her run it.

They applied for many properties, but landlords kept pulling out when they realized it was for an LGBTQ initiative.

Flores and Molina finally managed to sign a lease and spent $1,500 fixing it up.

“It was hideous,” Flores said with bright red lipstick on, screwing her face up in disgust. “There was dirt everywhere. You couldn’t even see the floor and there was no water, electricity, doors, toilet or kitchen — nothing!”

It wasn’t long before Vida Alegre came to life. Painted bright pink and blue, the center sits on the ground floor of a building in the city’s central Benito Juarez district where metro buses pass.

“Many of the people here have been shunned by their families, that’s why this is so important. We need to create our own families and not be so alone." 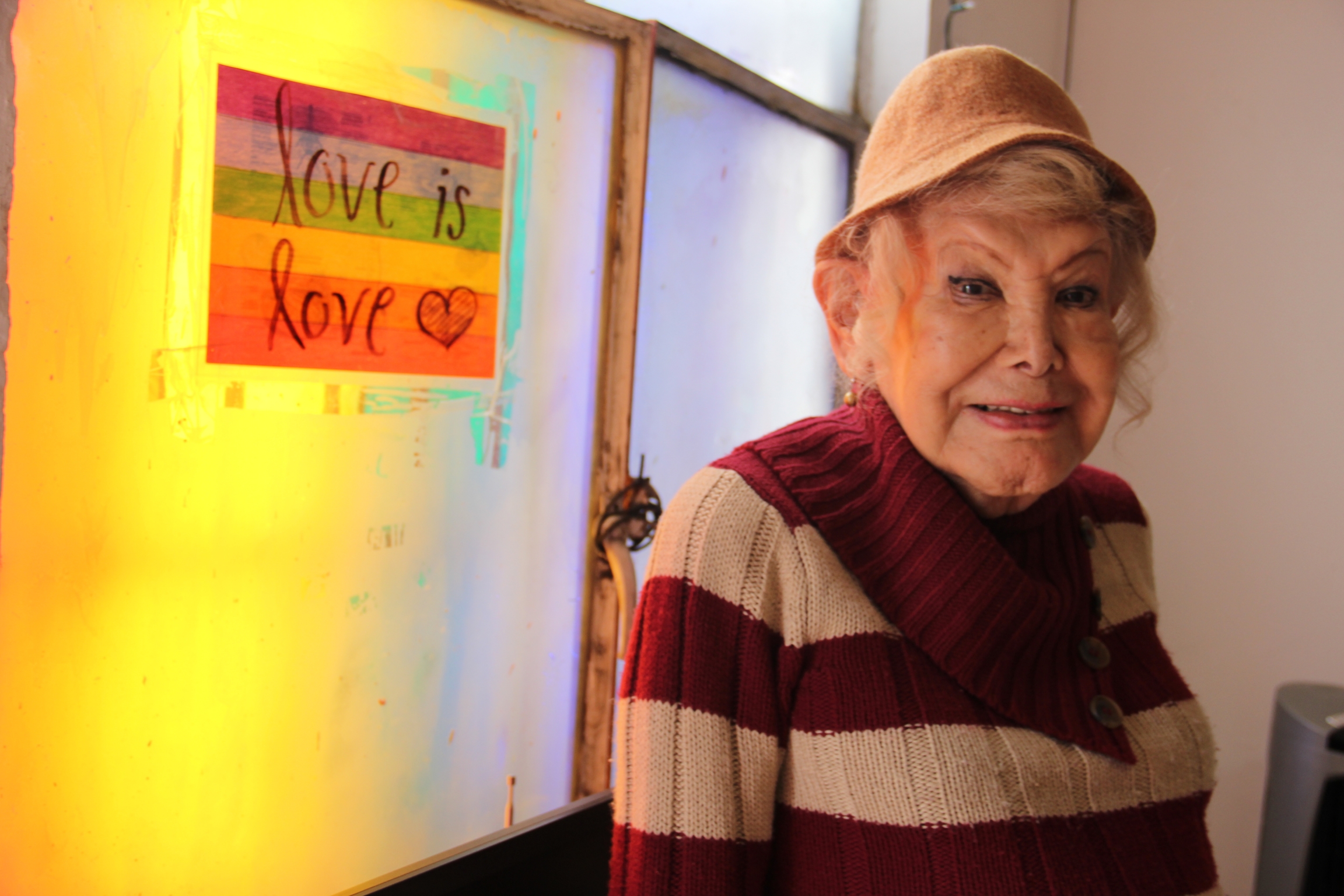 Samantha Flores cofounded Vida Alegre, a house for LGBTQ seniors, about a year ago, after having worked with children for many years.

Brent Alberghini, 42, is from New York and has lived in Mexico City for 10 years. He makes his living as a translator, but volunteers for Vida Alegre as a fundraiser and also cooks meals several times per week for members.

“Many of the people here have been shunned by their families, that’s why this is so important. We need to create our own families and not be so alone,” Alberghini said, sifting through piles of donated bags of beans, rice and canned food. The donations are stored in the bathroom, as there is no other space. He takes food home to cook the next week’s meals.

Flores shows no signs of slowing down. She’s working to raise funds to buy a property and start a residential home next year, where LGBTQ seniors can live together and have access to medical treatment and counseling. It would be the first of its kind in Mexico.

Flores said she has a message to the world about older LGBTQ people: “Let us shine. We don’t want to be invisible anymore.”