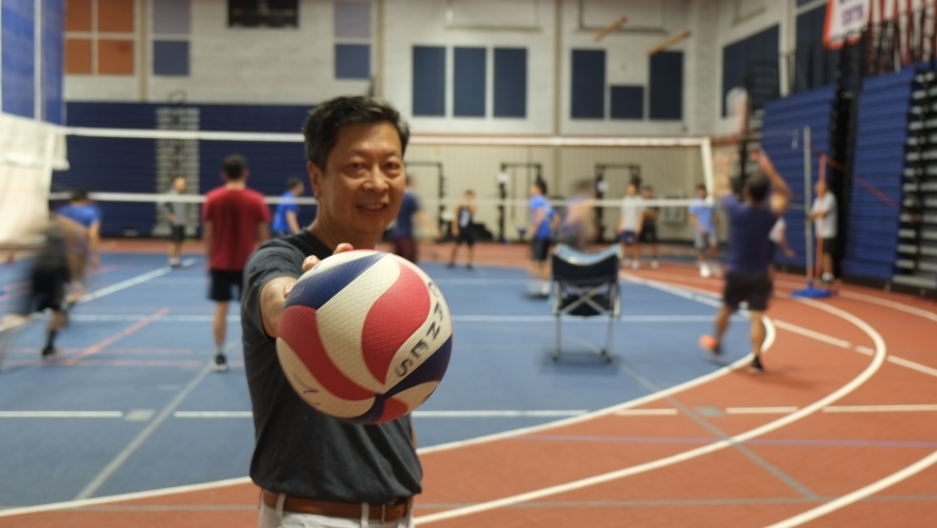 Jeff Chin is the president of the Boston Hurricanes. He played 9-man when he was younger and wants to make sure the sport survives new generations of Asian American players, Newton South High School, Newton, Massachusetts, on July 25, 2019.

On a Thursday evening toward the end of summer, the fieldhouse at a suburban high school outside of Boston echoes with the sounds of bouncing volleyballs. Dozens of people are playing a game called 9-man.

9-man is a street version of volleyball, but with more players. The court is bigger, and the pace is faster and more frenetic.

Just about everyone playing has roots in China. That's no coincidence — it’s the rules.

To be eligible for the sport, players must have some Asian or pan-Asian heritage. At any given time on the court, six out of the nine players on each team must be 100% Chinese. The other three players can be half Chinese or have a background from another East Asian country.

But these strict heritage rules may have to change as Chinese American communities evolve and demographics shift.

Ethan Wong, 21, has been playing 9-man since he was 13. He says his club, the Boston Hurricanes, feels like family.

“I feel like I have a bunch of older brothers, but also younger siblings. I feel like I should give them advice,” Wong said. “Here, I always feel like I’m accepted, and I’m accepting everyone as well.”

9-man got its start in the city parks and alleyways of America's Chinatowns — but now it’s also played in the suburbs, like where Wong practices, in a spacious high school gym complex in Newton, which is outside of Boston. 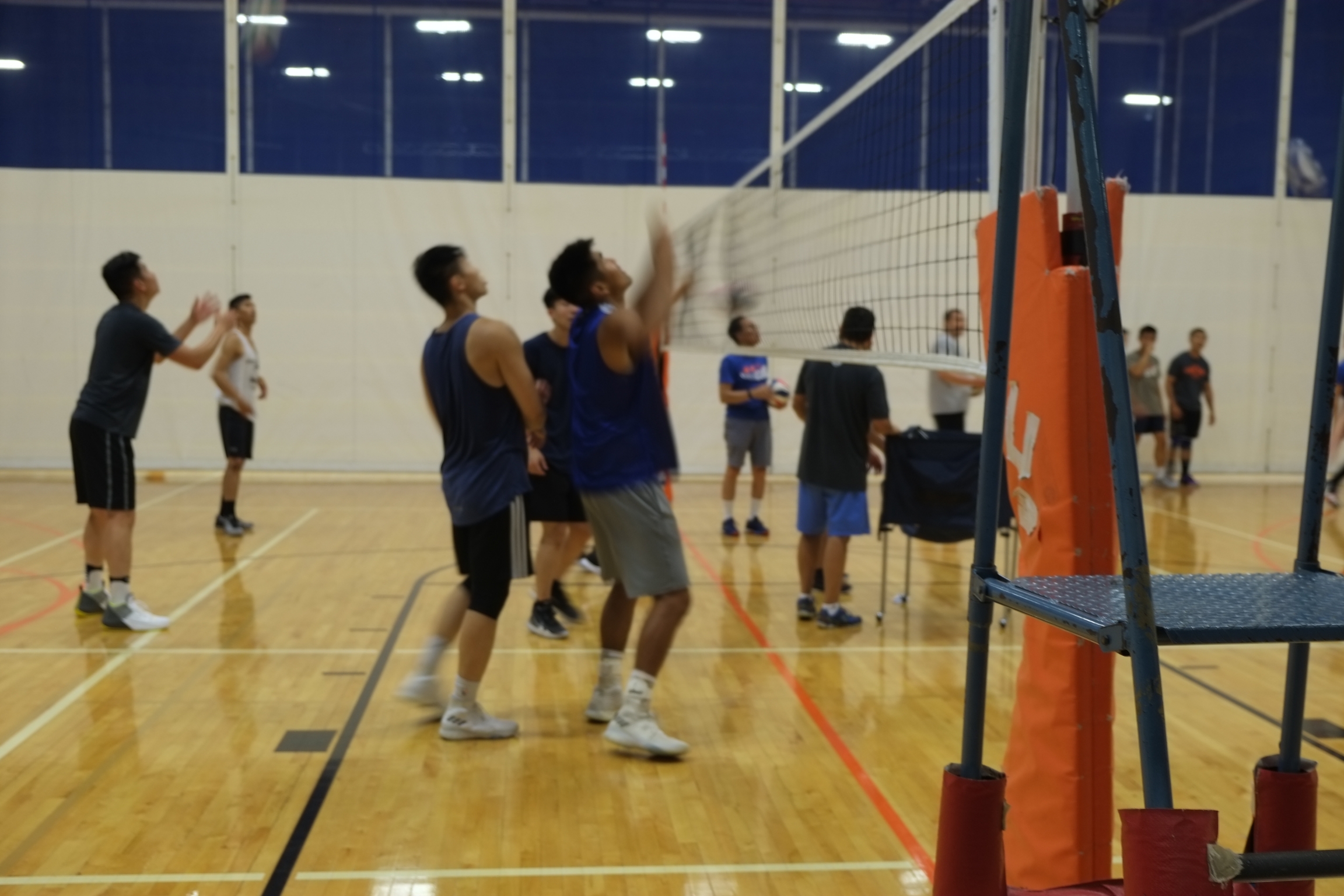 One of the Boston Hurricane’s top 9-man teams practices on a Thursday evening in a gym complex at Newton South High School, Newton, Massachusetts, on July 25, 2019.

One of Ethan’s coaches is his dad, John Wong. John also played 9-man growing up in Boston’s Chinatown. John Wong started playing when he was around 13 years old. He said he first joined a club to stay out of trouble, but the game soon became more than that.

“It really gave me the opportunity to connect with the community, connect with kids my age and connect with older members that I kind of looked up to as mentors."

“It really gave me the opportunity to connect with the community, connect with kids my age and connect with older members that I kind of looked up to as mentors,” John Wong said.

Over the years, he said, he got a good job and moved to the suburbs. Now, living almost 20 miles away from Boston’s Chinatown, Wong said his sons don’t have easy access to the same kind of tight-knit Chinese American community their father grew up with. He said 9-man is a place for them to connect with their roots.

Related: Chinese music is the antidote to my homesickness

The genesis of 9-man came from Chinese immigrants, predominantly restaurant workers, who played in the urban areas where they lived and worked, said Ursula Liang, a documentary filmmaker who made the 2014 movie, “9-Man.”

“Chinatowns were formed out of legislated discrimination against Chinese people, they had to cluster together for physical and emotional safety."

“Chinatowns were formed out of legislated discrimination against Chinese people. They had to cluster together for physical and emotional safety,” Liang said. “9-man was a game that could be played in tight urban spaces. It wasn't baseball, with these wide-open fields. You could erect a 9-man court in whatever place you had available to you, like a back alley or a parking lot.”

“A lot of our kids are from more suburban towns, and when they come in, they’re quite shocked to see that almost all the kids here are of Asian descent,” said Chin. “And then they feel safe as far as, 'Okay, I don’t feel like the minority'.”

Being part of the majority can be a powerful feeling, Liang said. 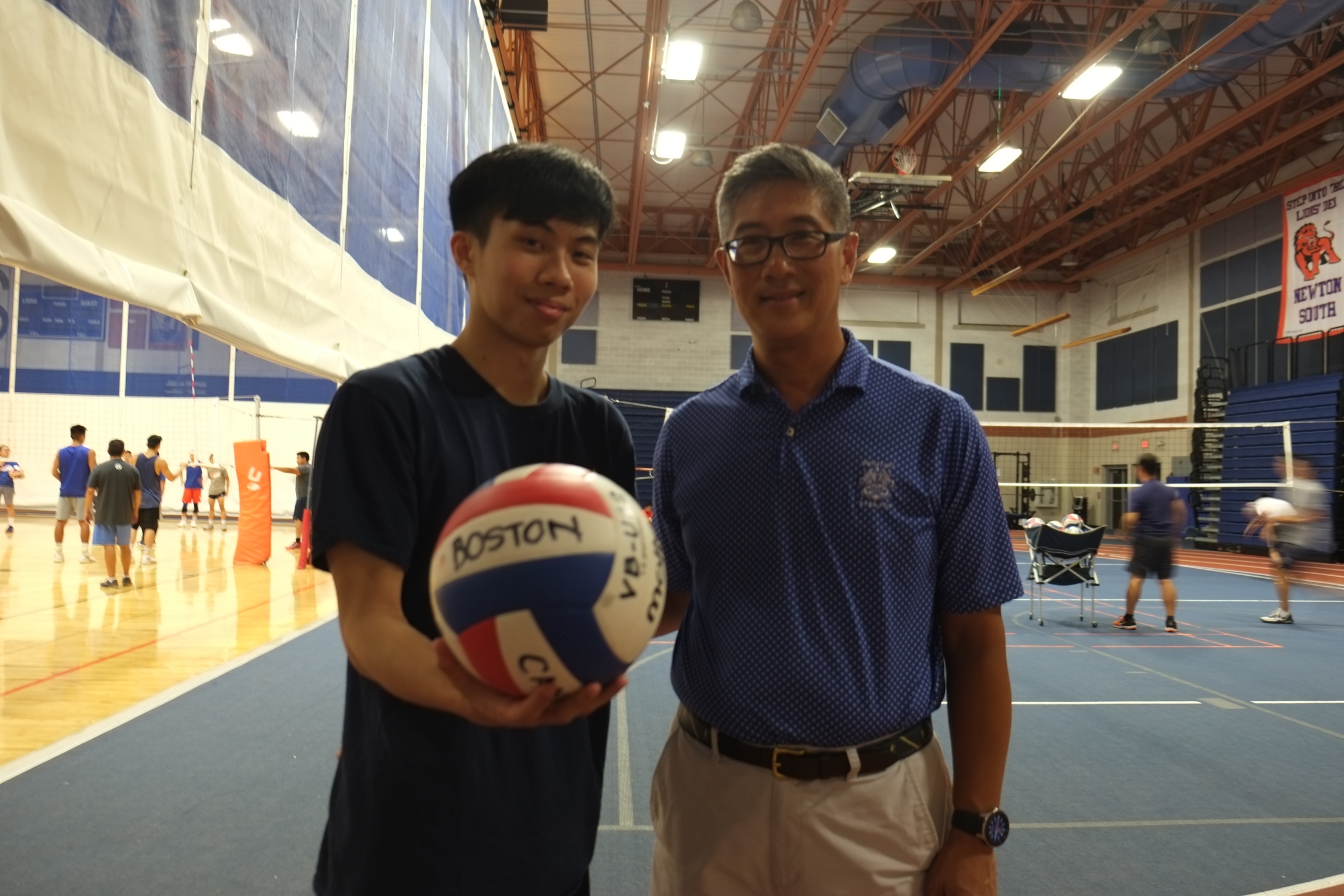 Ethan Wong and his father, John Wong, each started playing 9-man when they were 13 years old. John Wong now coaches a 9-man team. He says the sport is a way for his sons to connect to their Chinese roots. Pictured at Newton South High School, Newton, Massachusetts, on July 25, 2019.

Liang said some of the harmful stereotypes placed on Asian Americans are that they don’t have athletic builds and aren’t assertive.

“One of the great things about 9-man is that it wants to defy the stereotypes so badly that it’s a counter-narrative,” Liang said. “It's encouraged and celebrated to be loud and crazy and hyper-masculine and out of any kind of box that they could put you in.”

Cameron Ponce plays 9-man with the Boston Hurricanes. He is Filipino American, one of the three non-Chinese players allowed on the court during the tournament. Ponce said he doesn’t mind the strict rules about identity.

Related: Why one group of Chinese Americans opposes 'sanctuary' cities

“I think it’s cool that they let three non-full Chinese players play in general. So, I mean, I totally get it,” Ponce said. He said he feels more included playing 9-man than he feels playing on mostly White volleyball teams.

Chin said there is an ongoing conversation about whether 9-man’s identity rules need to evolve. He said he wants 9-man to remain Asian, that as US demographics change, there may be fewer 100% Chinese players interested in the sport.

“What happens in 20 or 30 years from now when there’s more mixed kids that want to play?” asks Chin. “That’s naturally going to happen. How does that play into the rules, and how do you adjust rules to facilitate for them?”

Another conversation going on is whether to open up 9-man to another group: women and girls.

“I think that would be super fun,” said 22-year-old Amanda Lacey, who plays women’s six-player volleyball with the Boston Hurricanes. “9-man is so much more fun, fast-paced and athletic.”

Lacey has practiced 9-man before, but she said she would welcome an opportunity to play on an all-women's team during a tournament.