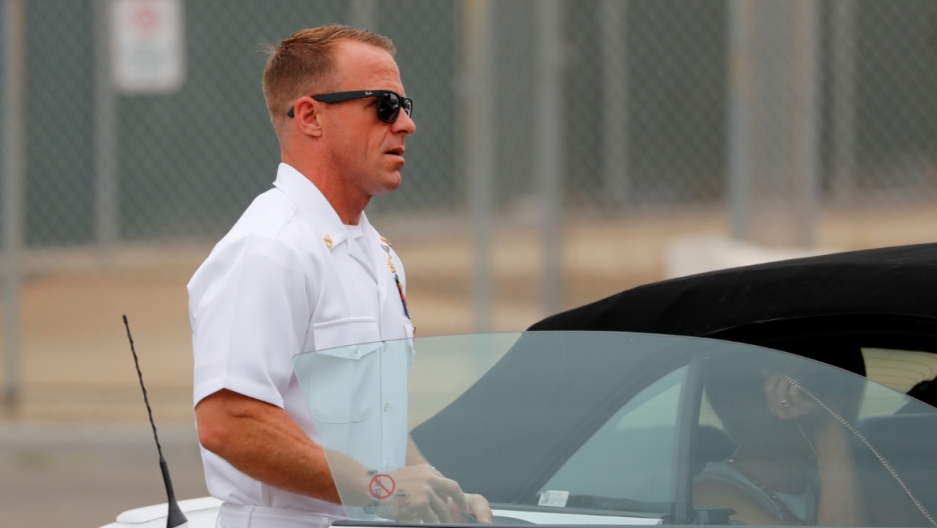 US Navy SEAL Special Operations Chief Edward Gallagher arrives at court for the start of his court-martial trial at Naval Base San Diego on June 18, 2019.

US Defense Secretary Mark Esper fired the Navy's top civilian on Sunday over his handling of the case of a Navy SEAL who was convicted of battlefield misconduct in Iraq and later won the support of US President Donald Trump.

Esper also determined that the sailor in question, Special Operations Chief Edward Gallagher, should be allowed to retain his Trident pin designating him as a SEAL — effectively ending the Navy's efforts to carry out a peer review that could have ousted him from the elite force.

Trump, who publicly opposed taking away Gallagher's Trident pin and had intervened in the case to restore his rank, cheered the moves.

The fired Navy Secretary Richard Spencer last week suggested a possible split with Trump by telling Reuters that Gallagher should still face a peer review board.

The SEAL was acquitted by a military jury in July of murdering a captured and wounded ISIS fighter in Iraq by stabbing him in the neck, but it convicted him of illegally posing with the detainee's corpse. That had led to his rank being reduced.

The White House said in November that Trump had restored Gallagher's rank and had pardoned two Army officers accused of war crimes in Afghanistan. Critics had said such actions would undermine military justice and send a message that battlefield atrocities will be tolerated.

In a letter acknowledging his termination, and seen by Reuters, Spencer wrote, "The rule of law is what sets us apart from our adversaries."

"Unfortunately it has become apparent that in this respect, I no longer share the same understanding with the Commander in Chief who appointed me."

“In this case in particular, [Trump] reached in and overturned a conviction by a jury of their peers under the UCMJ, the Uniform Code of Military Justice, and really is now at war with the Navy SEALs,” said Paul Rieckhoff, Army combat veteran, podcast host and founder of the Iraq and Afghanistan Veterans of America. “He's disregarding their guidance, he's disregarding their standards and he's disregarding good order and discipline,” Rieckhoff told The World's Marco Werman.

Marco Werman: How do you think this is going to impact respect for the rules of engagement among deployed forces?

Paul Rieckhoff: I think it basically sends a message that you don't have to follow the rules and if you do and you're buddies with the president, they can bail you out — which is a terrible precedent. It's exacerbated by the fact that Gallagher went on Fox News this weekend. He's still technically in the military, [and] he's on Fox News pleading his case.

The message now is if you get a few friends at Fox News, maybe you get on TV and you appeal to the political base of President Trump, you can get away with crimes. This is a crime that [Gallagher] was convicted of, that he lost his rank and now the president feels he knows better than the military.

[This is] a guy who's never served in the military himself, who dodged the draft when he had the opportunity to serve in Vietnam, [and he] continues to disrupt the military in a way that's really damaging to our national security.

Remind us why rules of engagement are so important.

They are laws. If you think about it in the civilian context, rules of engagement are the laws that govern our battlefield in the same way the rules of the road govern drivers. You can't blow through red lights, you can't run over kids, you can't crash into buildings, and if you do, there are repercussions and you're generally held accountable.

The same is true in the military. [Rules on engagement] preserve good order and make the military function.

It is also important in upholding the standards of the United States. We are generally viewed as the good guys. We don't commit war crimes, we don't use chemical weapons, we generally, until recently, didn't torture people. And it's very important that we not only have the strategic and military advantage, but we have the moral high ground as a country that can be respected, honored and allied with. And now that's gone out the window under President Trump and it really hurts our allies and our troops on the ground.

Paul, I know one of your major concerns is mental health among combat veterans and their ability to go public with disturbing things that they witness. What are the risks for our military if they don't feel free to speak out?

It creates an internal moral conflict that will exacerbate any kind of mental health stress that they have going on. The really challenging part of Trump's meddling with our military is that this undermines the respect and dignity of all the guys and gals who are doing the right thing. All the guys and gals who didn't shoot civilians; who exercised tremendous discipline; who compromised their own safety at times for the safety of others.

All those men and women who did the right thing for a decade and a half are now really besmirched, their reputation is endangered by the president. It really cuts to the core of whether or not the American people can trust us. They're going to look at military folks differently. I think it endangers our ability to get support from the American people, the civilian American people, when we need it the most.