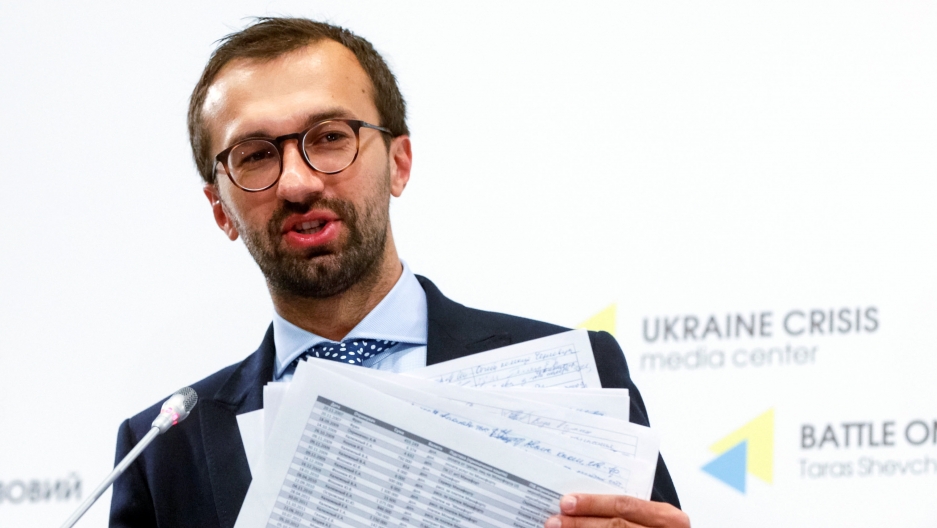 Sergii Leshchenko, a former member of Ukraine's parliament, has been repeatedly mentioned by Republicans during the presidential impeachment hearings.

Leshchenko, now an investigative journalist, got ahold of what's called the "black ledger." It's a handwritten manuscript that allegedly details the corruption of former Ukrainian President Viktor Yanukovych.

Somehow, it was snuck out of Yanukovych's party headquarters and sent to Leshchenko.

Many Republicans say the black ledger is a forgery and that it was put out there to link United States President Donald Trump's former campaign manager, Paul Manafort, to corruption in Ukraine.

Leshchenko says that the story is not even close to the truth and has published op-eds in the Washington Post and Kyiv Post in an attempt to correct the record. He spoke to The World's Marco Werman about the black ledger and how it's being portrayed by US politicians in the impeachment process.

The World: Sergii, what are Republicans lying about at these impeachment hearings?

Where do you think the so-called conspiracy came from?

This conspiracy came from Rudy Giuliani and his Ukrainian associates and the former Ukraine prosecutor general. I'm talking about Mr. Lutsenko — not Leshchenko, that's me. He was ready to provide any information, even fake information to Americans, just to keep his position after the presidential election. And Mr. Giuliani was happy to believe this information because this was provided by the actual prosecutor general, and he maybe could not believe that the prosecutor could lie. And second, because this information was totally in [the] frame of a conspiracy theory, which Mr. Giuliani constructed. That is why the American president was ready to believe that there was a conspiracy against him.

Why do you think they're still talking about it now?

I'm curious. I mean, this op-ed that you wrote in the Kyiv Post that Republicans keep lying about you at impeachment hearings, is the second op-ed you've written trying to clear your name to American audiences. Why even get involved? Why respond?

I want this to be an investigation built on clear and real facts. I don't want to continue this fake narrative in the American establishment, in American media and in American society.

But don't you feel like this might actually put you in even hotter water? Republicans might look at you and cast all of this and what you're saying as actively trying to be part of the impeachment of Trump?

Oh, I don't think so. My idea is just to clear my name from this fake allegation to show what really happened in this situation.

And are you also keen on just improving the relationship between the US and Ukraine?

Of course. My idea is to have the bipartisan support of Ukraine. At the same time, in the US, there is the political process. In my opinion, it's almost impossible to restore good relations until the end of the election because the Ukrainian card will be played by both sides until the end. That is why these relations, the US and Ukraine relations, are very important. And I believe for American politicians it is very important to stop playing the Ukrainian card.

Have you been called to attend the hearings or even testify?