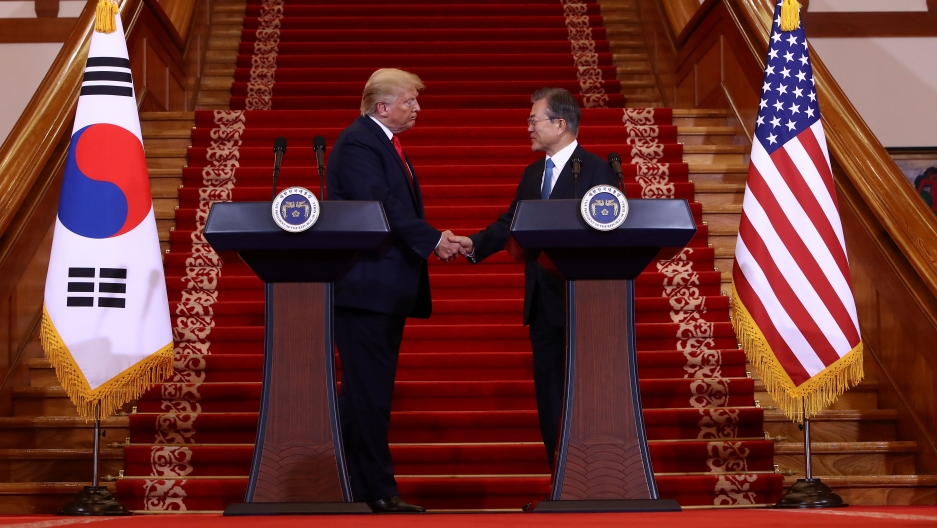 US President Donald Trump sent a message to a key ally this week: Pay up.

South Korean lawmakers say the Trump administration wants $5 billion per year to cover the cost of US forces in South Korea. That's more than five times more than what it currently pays.

A South Korean newspaper is also reporting that the US is now considering withdrawing a combat brigade. Washington denies this.

Victor Cha was director for Asian Affairs in George W. Bush's National Security Council. He's now the vice dean of the Edmund A. Walsh School of Foreign Service at Georgetown University. Cha spoke to The World's host Marco Werman about US troops in South Korea.

Marco Werman: Let's start with the basics. Why are US troops in South Korea? Remind us.

Victor Cha: So, they've been there since the Korean War largely to prevent a second invasion by North Korea. But they're also there as part of a broader US presence and commitment to free markets, freedom of navigation and general stability in the most economically vibrant region of the world today.

So, the US pulled its troops out of South Korea in 1949, and within a year the North invaded. I know 2019 is not 1950, but what are the dangers that North Korea might attempt to coerce South Korea in some way if US troops are withdrawn?

That's a very good point and question. I mean, this would be — if the reports are true — this would be the United States pulling forces from Korea over money at a time when the North Korean threat has not abated in the least. In fact, it has only grown more in terms of its nuclear weapons and ballistic missiles. And they still have a 1.1 million-man army, forward-deployed, ready to attack.

I mean, to say that this would be a failure of the alliance would be an understatement. And in the end, it's about money, which is important. But in the context of national security, it's not the most important thing. This is a 66-year-old alliance. The South Koreans have fought with the United States in every war since the Korean War. South Korea had the third-largest ground contingent in Iraq. They had PRTs, provincial reconstruction teams, in Afghanistan. So, I mean, South Korea has done its fair share to work with the United States and help advance the US agenda around the world.

US troops are there to deter North Korean aggression, and that deterrence theoretically should keep the US from getting dragged into another war on the Korean Peninsula. It's interesting. South Korea pays the US, even though US troops are there for American strategic benefit. That's a pretty good deal. So, what's the problem for President Donald Trump?

Well, I think President Trump believes that having these forces abroad is expensive for the United States and that countries free ride off the US security commitment, and they use those savings to cheat us on trade. He has believed that for 30-something years, even though most of that is factually inaccurate.

I don't mean this to be facetious, but isn't Trump getting good counsel from the Pentagon about the high cost of an actual war?

Yeah, I presume that he is. But for Trump, I think it's all about leverage in a negotiation. And the reason for the $5 billion demand — which is politically impossible for South Korea, it's five times what they paid in the last agreement — I think he feels like he has all the leverage because he can make this demand. And if South Koreans don't agree, he can threaten to pull forces. So, it doesn't surprise me that there are reports now that the United States might actually draw down.

How do you say "protection racket" in Korean?

Yeah, I mean, there is this whole question of whether Trump actually wants to make a profit off of US forces abroad, which would essentially turn us into mercenaries. And that's not what the US military is.

It's interesting. Some South Korean activists are, in fact, calling for a reduction in US forces, even a full withdrawal. Why is that? What do they see as a benefit?

For progressives, it's ironic because progressives and Trump may actually agree in the sense that Trump may actually want this cost-sharing negotiation to fail by putting such an exorbitant price tag on it so that he would have an excuse for pulling troops. And progressives in South Korea traditionally believed that South Korea should shed its relationship with the United States and become more independent in terms of its security decisions. And so there, you know, there is a small minority, I think, on the Trump side, and there's a small minority in Korea on the progressive side. They may actually agree on an outcome of pulling troops in Korea.

How is this tension right now being seen in North Korea? Do we have a sense?

Oh, I think the North Koreans would be more than happy to see the United States and its ally arguing over the cost of US forces and then the US threatened to pull out troops. That, in the end goal, is what North Korea wants. And this would be like a big, fat Christmas present for the North Korean leader.