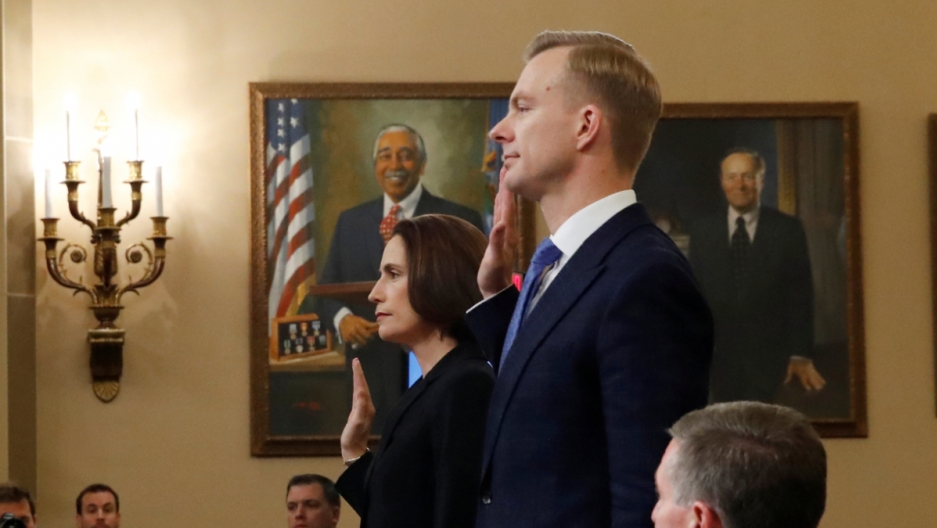 David Holmes and Fiona Hill are sworn in before testifying in front of the House Intelligence Committee, as part of the impeachment inquiry on Nov. 21, 2019.

President Donald Trump's former Russia adviser Fiona Hill urged lawmakers in the House of Representatives impeachment inquiry on Thursday not to promote "politically driven falsehoods" that cast doubt on Russia's interference in the 2016 US election.

In her prepared testimony, Hill said some members of the House Intelligence Committee, based on their questions and statements, appear to believe that Russia and its security services did not conduct a campaign against the United States during the 2016 presidential race and that perhaps Ukraine did.

Hill appeared to be referring to some of President Donald Trump's Republican allies and defenders on the committee in the impeachment inquiry focusing on his actions toward Ukraine.

"This is a fictional narrative that has been perpetrated and propagated by the Russian security services themselves," said Hill, who until July served as the director for European and Russian affairs at the White House National Security Council.

"In the course of this investigation, I would ask that you please not promote politically driven falsehoods that so clearly advance Russian interests," she said.

Some Republican members of the committee have advanced a discredited conspiracy theory, embraced by Trump and some of his allies in Congress and the conservative media, that Ukraine, not Russia, interfered in the last presidential election.

Thursday's hearing marks the fifth and last scheduled day of public hearings by the Democratic-led House Intelligence Committee. The inquiry is focused on Trump's June 25 telephone request that Ukrainian President Volodymyr Zelenskiy investigate former Vice President Joe Biden, a leading contender in the field of Democrats seeking to challenge Trump in the 2020 election. Trump also asked Zelenskiy to investigate the debunked conspiracy theory that Ukraine interfered in the 2016 election.

Lawmakers also will question David Holmes, a staffer from the US Embassy in Ukraine, as they seek to learn more about a July 26 phone call in which he says he overheard Trump ask about the status of the investigation.

In his opening statement, David Holmes said his work at the embassy started to become overshadowed in March 2019 by the work of Trump's personal lawyer, Rudy Giuliani, who was pushing Ukraine to carry out the two probes.

"I became aware that Mr. Giuliani, a private lawyer, was taking a direct role in Ukrainian diplomacy," Holmes said.

US intelligence agencies and former Special Counsel Robert Mueller have determined that Russia interfered in the 2016 election with a campaign of hacking and propaganda intended to sow discord in the United States, boost Trump's candidacy and harm his Democratic opponent Hillary Clinton.

Mueller's team brought criminal charges against 12 Russian intelligence officers in the hacking effort, accusing them of covertly monitoring employee computers and planting malicious code, as well as stealing emails and other documents.

Hill warned lawmakers that Russia is gearing up to repeat its election interference activities in 2020.

"We are running out of time to stop them," she said.

Nunes said Hill "claimed that some committee members deny that Russia meddled in the 2016 election" but said a March 2018 report by Intelligence Committee Republicans "analyzed the 2016 Russia meddling campaign."

"Needless to say, it's entirely possible for two separate nations to engage in election meddling at the same time and Republicans believe we should take meddling seriously by all foreign countries, regardless of which campaign is the target," Nunes said, appearing to embrace the notion of Ukrainian election meddling.

Like a number of career government officials who have already testified, Hill said she prides herself as a nonpartisan foreign policy expert who has served Republican and Democratic presidents. A naturalized US citizen from Britain, Hill describes herself as an "American by choice," tracing her poor family's roots to the same area of England as George Washington.

In closed-door testimony last month, Hill recalled a July 10 meeting between US and Ukrainian officials that then-White House national security adviser John Bolton cut short after Gordon Sondland, US ambassador to the European Union, said there was an agreement for an Oval Office visit for Ukraine's president if his government started certain investigations.

She said Bolton told her to attend a follow-up meeting at which she heard Sondland say there was an agreement with acting White House Chief of Staff Mick Mulvaney for the meeting. She said she heard Sondland mention the Ukrainian energy company Burisma, which she considered inappropriate. Burisma had Joe Biden's son, Hunter, on its board.

After reporting to Bolton what she heard, he told her to go to National Security Council lawyer John Eisenberg.

"You go and tell Eisenberg that I am not part of whatever drug deal Sondland and Mulvaney are cooking up on this," Bolton said.

Holmes has told lawmakers in closed-door testimony that he heard Trump's voice on the July 26 phone call with Sondland at a Kyiv restaurant in which Trump asked about Ukraine's willingness to carry out an investigation.

"So, he's gonna do the investigation?" Trump asked Sondland, referring to Zelenskiy, according to Holmes' previous testimony.

"He's gonna do it," replied Sondland, according to Holmes.

Sondland added that the Ukrainian president would do "anything you ask him to," Holmes said.

Trump has denied wrongdoing, publicly criticized witnesses and described the impeachment proceedings as a "witch hunt." He also says he does not remember the call with Sondland.