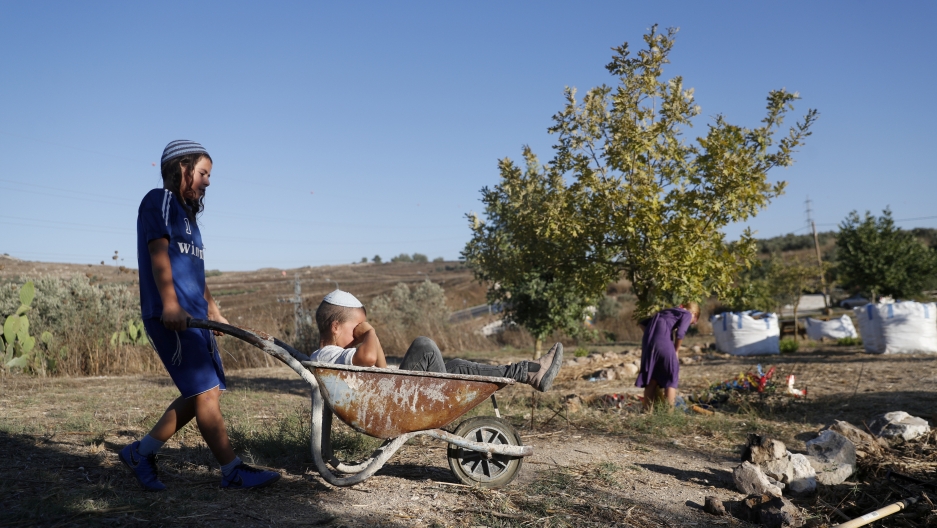 Children play in the Israeli settlement of Havat Gilad in the occupied West Bank, July 24, 2019. Havat Gilad is a cluster of homes sprinkled across a hilltop that is surrounded by Palestinian villages deep in the West Bank.

United States Secretary of State Mike Pompeo announced today that the US will abandon its four-decade-old position that Israeli settlements in the occupied West Bank were “inconsistent with international law,” a stance that may make Israeli-Palestinian peace even more elusive.

The announcement was a victory for Israeli Prime Minister Benjamin Netanyahu, who is struggling to remain in power after two inconclusive Israeli elections this year, and a defeat for the Palestinians.

Pompeo said US statements about the settlements on the West Bank, which Israel captured in 1967, had been inconsistent, saying Democratic President Jimmy Carter found they were not consistent with international law and Republican President Ronald Reagan said he did not view them as inherently illegal.

Palestinians argued the US stance flouted international law. The international community views the transfer of any country’s civilians to occupied land as illegal under the Fourth Geneva Convention of 1949 and UN Security Council resolutions.

“The United States is neither qualified nor is authorized to negate international legitimacy resolutions and it has no right to give any legitimacy to Israeli settlement,” said Nabil Abu Rudeineh, a spokesman for Palestinian President Mahmoud Abbas.

Former US ambassador to Israel Dan Shapiro spoke to The World's Marco Werman about what the decision means the region.

Marco Werman: Ambassador, what makes this shift in policy so important?

Dan Shapiro: The truth is, is that it's more symbolic than actual. Every administration since the Carter administration voiced their opposition to Israeli settlement construction in the West Bank, without making reference to the legal question. It was on policy grounds.

Clearly those steps would make it much, much harder to ever achieve a two-state solution. And since President [Donald] Trump has never endorsed a two-state solution, it appears to be a continuation of an effort essentially to move us away from that track and kill off that option.

What reaction have you heard about this announcement in Israel and the occupied territories?

For many Israelis, they are appreciative of it because at least some Israeli settlements are not particularly controversial. There are consensus points in Israel, the ones that are larger and closer to the pre-1967 borders, and which most peace plans have envisioned Israel retaining and in a land swap. But overall, it's consistent with the Israeli view that settlements are not illegal under international law and so it's been received positively by both the prime minister and the leader of the opposition.

And what about Palestinians? What about opinion in the West Bank?

Palestinians certainly strongly oppose any settlement construction. They always have. They certainly do consider all settlements to be illegal without distinction. They weren't thrilled with the policy of previous administrations either. They didn't focus on the illegal question and also didn't necessarily succeed in stopping Israeli settlement. But I think they view this decision by the Trump administration as the latest in a series of blows to the administration's ability to serve as any kind of mediator.

In the final days of the Obama administration, under which you served as ambassador to Israel, The US allowed the UN Security Council to pass a resolution declaring the settlements a flagrant violation of international law. If that was the feeling of the Obama White House, why wait until the final days of eight years of making policy to ratchet things up?

That was an abstention on a resolution that the Obama administration did not draft, but came at a time when there were settlement expansions happening. Every previous administration also found itself in a situation in which Security Council resolutions came before them, which included language which was not identical to US policy, but which ultimately they abstained on and allowed to pass because the United States has been quite isolated on this question about the legality of Israeli settlements vis-a-vis the rest of the world.

Well, Jared Kushner's peace plan turns out to be a little more than a flashy economic program with no clear roadmap to peace. There's Trump's decision to recognize Jerusalem as Israel's capital, the relocation of the US embassy to Jerusalem and the closure of the Palestinian diplomatic office in Washington and the declaration that the Golan Heights is Israel's sovereign territory. When you stack all this up, what is US policy in the Mideast?

You know, the administration has held out the prospect of a plan that would lay out their policy for now nearly three years. That plan has never been presented and it's not clear it ever will be presented. But every indication is that the Trump administration's view of the state that it hopes to see in this part of the world is Israeli annexation of wide swaths of the West Bank, where settlements exist and even beyond those areas and around that isolated islands of limited Palestinian autonomy.

Are you describing a one-state solution?

It's not a solution. It's probably a one-state outcome, or we might call it a binational state outcome. It also is not very sustainable, in my judgment, and it won't be the policy of a successor administration perhaps as early as 14 months from now if a Democratic president takes office.

So, elaborate on that. Where do you see hope for a two-state solution, still?

It would take tremendous leadership from Israelis and Palestinians and with American support from Arab leaders to, first of all, convince very disillusioned publics that it's even possible. None of this is possible in the current leadership constellation. In fact, I think a realistic policy of the next administration, if it wants to restore the two-state solution as the center of American policy, is not to say we want to achieve a two-state solution, but rather we want to find ways to stabilize it and keep it alive for later. At the moment, a two-state solution is certainly not in the cards. The risk is that it goes over the cliff and is not achievable even later when different and bolder leadership is in.