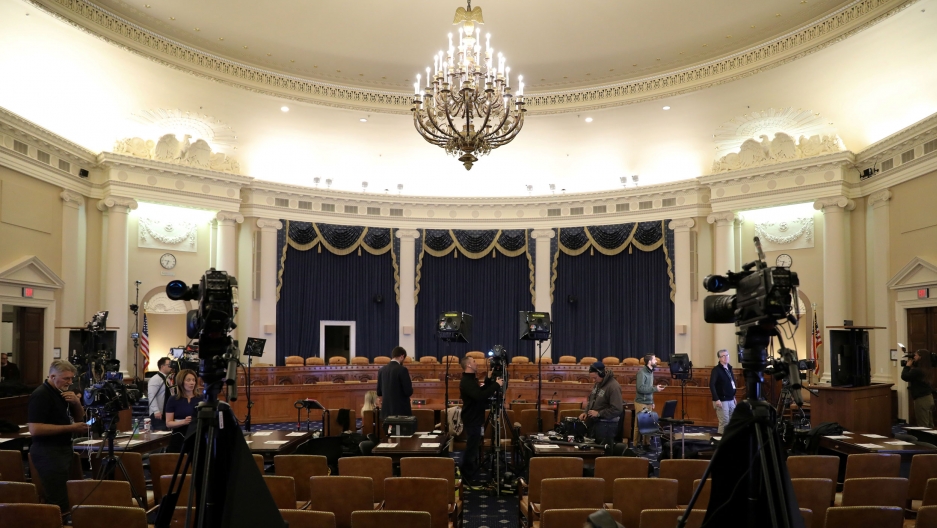 Television news crews set up for live reports ahead of Trump impeachment inquiry testimony by Ambassador William Taylor, the top US diplomat in Ukraine, and George Kent, deputy assistant secretary of state for European and Eurasian Affairs, before a House Intelligence Committee hearing, Nov. 13, 2019.

The impeachment inquiry into US President Donald Trump will reach a new juncture Wednesday when lawmakers launch their first televised public hearings, marking high-stakes phase of proceedings that could determine the fate of his tumultuous presidency.

Lawmakers in the US House of Representatives have summoned three US diplomats — all of whom have previously expressed alarm in closed-door testimony about Trump's dealings with Ukraine — to detail their concerns this week under the glare of wall-to-wall news coverage.

Trump's fellow Republicans on the committees, have crafted a defense strategy that will argue he did nothing wrong when he asked Ukraine's new president to investigate potential political rival former Vice President Joe Biden.

Both sides will be playing to a sharply polarized electorate as they move deeper into a six-week-old investigation that has shadowed Trump's presidency with the threat of being removed from office even as he campaigns for a second term.

It has been two decades since Americans last witnessed impeachment proceedings against a president, and these will be the first of the social media era. Republicans, who at the time controlled the House, brought impeachment charges against Democratic President Bill Clinton in a scandal involving his sexual relationship with a White House intern. The Senate ultimately voted to keep Clinton in office.

Though no president has ever been removed from office by impeachment, that has not deterred Democrats, who are looking into whether Trump abused his power by withholding nearly $400 million in security assistance to Ukraine to pressure the vulnerable US ally.

The focus is a July 25 phone call, in which Trump asked Ukrainian President Volodymyr Zelenskiy to open a corruption investigation into Biden and his son and into a discredited theory that Ukraine may have meddled in the 2016 US elections.

Trump has denied any wrongdoing, derided some of the current and former US officials who have appeared before committees and branded the investigation a witch hunt aimed at hurting his re-election chances.

Hours before the hearing, he tweeted comments from conservative media supporters calling the proceedings a sham.

"President Trump's pressure campaign was 'out of bounds,' and every time he insists that it was 'perfect' he is saying that he is above the law," House Speaker Nancy Pelosi said on Twitter, referring to how the Republican president has described his actions in the Ukraine saga.

Trump also suggested on Tuesday that he would likely release the transcript of an April 12 conversation with Zelenskiy this week but gave no other detail. It was the July phone call that prompted an anonymous whistleblower to set off the impeachment probe.

With a potential television audience of tens of millions, two witnesses — William Taylor, top US diplomat in Ukraine, and Deputy Assistant Secretary of State George Kent — will be sworn in before the House Intelligence Committee Wednesday.

Taylor testified he had been concerned to learn that security aid to Ukraine, as well as a White House meeting between Trump and Zelenskiy, had been delayed for political reasons.

Kent said he had been alarmed by efforts by Trump’s personal lawyer, Rudy Giuliani, and others to pressure Ukraine. He said Giuliani — who Democrats have accused of conducting a shadow foreign policy effort in Ukraine — had conducted a "campaign full of lies" against Marie Yovanovitch, who was abruptly pulled from her post as US ambassador to Ukraine in May. She will give public testimony on Friday.

Taylor and Kent were testifying together because "they both were witness to the full storyline of the president's misconduct," an official working on the impeachment inquiry said.

For both sides, the electoral implications of the impeachment process is clear as it looms over other issues, such as the economy and immigration, as the 2020 election campaign gathers steam.

Democrats are hoping to convince independent voters and other doubters that Trump was wrong not only in asking Ukraine to dig up dirt on his rival but in making it a quid-pro-quo proposition, Latin for a favor in exchange for a favor.

Republicans want to paint the hearings to voters as a partisan exercise by Trump's opponents who resented failing to gain more politically from an earlier special counsel's investigation of the Trump team's alleged ties to Russian meddling in the 2016 election.

Trump is the fourth US president to face impeachment proceedings. None were removed from office, although Richard Nixon resigned as he faced almost certain impeachment in 1974 over the Watergate scandal.

This week's hearings are seen as a likely prelude to articles of impeachment — formal charges — against Trump being brought to a vote in the Democratic-controlled House. Even if that leads to an actual impeachment trial in the Senate, Republicans who control the chamber are considered unlikely to vote for Trump's removal.

By Patricia Zengerle and Matt Spetalnick/Reuters