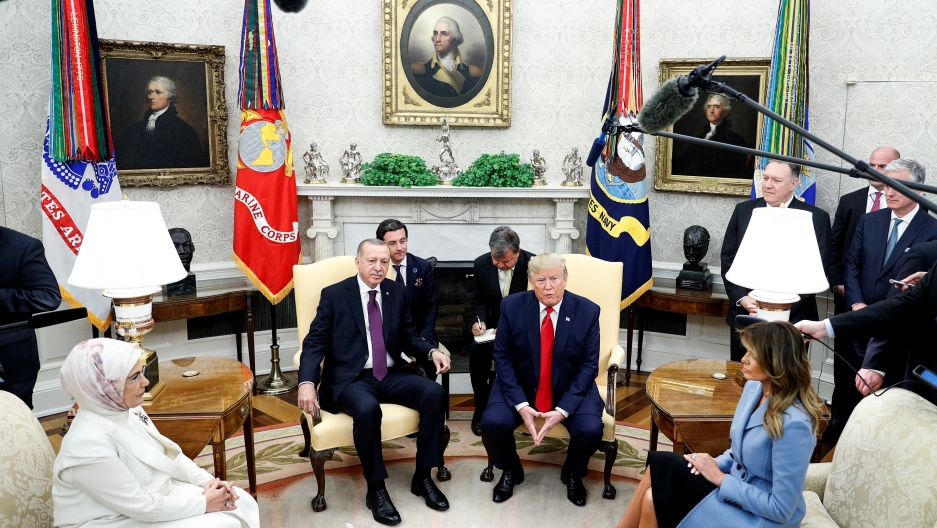 US President Donald Trump and first lady Melania Trump meet with Turkey's President Tayyip Erdogan and Emine Erdogan in the Oval Office of the White House in Washington, D.C., on November 13, 2019.

Turkey's President Recep Tayyip Erdoğan met with US President Trump at the White House on Wednesday. Relations between the two countries have threatened to go off the rails in recent months after Erdoğan decided to purchase a Russian missile defense system and then launched a cross-border incursion against America's Kurdish allies.

But so far Erdoğan has managed to navigate the crisis. Turkish historian and writer Soner Cagaptay says it's because he's a masterful tactician.

Cagaptay is the author of "Erdogan's Empire: Turkey and the Politics of the Middle East."

He spoke to The World's host Marco Werman about how Erdoğan got his start, and how he managed to transform Turkey from a liberal, secular democracy into a more religious, conservative state.

Soner Cagaptay: Erdoğan is a politician who comes from the other side of the tracks. He has long identified with Turkey's pious masses, who in 20th century Turkey, felt other people like Erdoğan, who wanted to wear religion on their sleeve in this ideologically secular state established by Mustafa Kemal Ataturk, felt that they did not have a fair share of the pie. And Erdoğan was advocating for a larger role for these groups in the Turkish public. And he was also not shy about using Islam in politics. That put him on a trajectory of conflict with Turkey's secularist constitution and court, which actually sentenced him to jail. He served a short term that cast him as a hero in the eyes of his adoring supporters.

Related: Why the US has nuclear weapons in Turkey — and may try to put the bombs away

In 2003, when Erdoğan first became prime minister, he sounded more like a liberal. Didn't he? So how do you understand his transformation and how he changed Turkey?

When he first came to power, Erdoğan indeed stood for Turkey's dispossessed masses. He had this image as the underdog. Erdoğan also delivered quite phenomenal economic growth — record, perhaps in Turkey's modern history — that he used to lift many of his supporters out of poverty. When Erdogan came to power, infant mortality rate in Turkey was comparable to pre-war Syria. Now, the infant mortality rate is comparable to Spain, which is why he wins.

But the same popularity that he built has also made him less and less of a liberal. Erdoğan started to pay less attention to people who did not agree with him. And what happened is quite ironic. In the 20th century, Turkey was a country that treated people such as Erdogan, who wanted to wear religion on their sleeve, as second-class citizens. Now in Erdoğan's Turkey, Turkey treats people who don't want to wear religion on their sleeve as second-class citizens. So he's turned the tables upside down. So his trajectory, I argue, has thrown Turkey into a deep political crisis where half of the country supports him and the other half loathes him.

I know you've been quoted in the past as describing Erdoğan as a "doner kebab master." That would be that sliced meat on a plate around all over the world in Turkish-style delis. What do you mean by that?

It's meat on a spit. The master takes really thin slices from the spit, almost paper-thin slices, with his sharp knife. And if you don't watch the spit, you really don't see it get small. So I argue that Erdoğan's undermining of Turkey's democratic institutions is not a product of the last few years. In fact, he's been doing this for a very long time. He was very meticulous, as in terms of going after his opponents, cracking down on dissidents, locking up dissidents, as early as the end of the last decade. But because he was very gradual about this, with the precision of a doner kebab master taking really thin slices from his opposition, not going on massive crackdowns, that did not fall onto the radar screen of broader global audiences.

Today we have some pretty striking optics. Erdoğan is at the White House despite a crisis in Turkish-US relations. Do you see the bromance on display right now between Trump and Erdoğan? And is it enough to keep the Turkish-US alliance intact?

I do see an affinity between the two leaders. Erdoğan and Trump, I think, have a political man crush on each other. They like each other's style of governance. But there are so many issues that divide Turkey and the United States, from Syria to Turkey's purchase of Russian-made missile defense system, to Erdoğan's democratic transgressions. But Trump has been able to hold off many of these pressures in the US capital. He has prevented massive sanctions. The problem, of course, here, is that you can't hinge on a relationship between two countries on two leaders, because that is just not enough to carry the relationship forward in the long term.

There are big risks that lie ahead for everyone. Just check them off. What are they?

I would say the biggest risk for Erdoğan is his ability to leverage the United States and Russia in foreign policy. What Erdoğan has done so far is he has gone to the Russians and said, "Here's what the Americans are giving to me in Syria. What can you give to me more than that they're providing?" So I was able to take over parts of northwestern Syria with Russian green light. And then he went to the Americans and he said, here's what the Russians gave me, northwest Syria. I'd like to have parts of northeast Syria. And he was able to take areas along the Turkish border.

So there is a pattern here, where I think Erdoğan has been leveraging Putin and Trump against each other. Of course, these are two military superpowers, America and Russia. And Turkey is not. And I think his ability to leverage Putin and Trump against each other will be limited. And of course, the second problem is Turkey's constant paralysis, almost permanent paralysis, between these two blocs that oppose Erdoğan and that love Erdoğan. And increasingly, there is no room left in between. I see Erdoğan becoming only more authoritarian going forward. Left to its own dynamics, Turkish society is going to vote him out. So that means he will only become more authoritarian to prevent that from happening, and that will only exacerbate Turkey's domestic political crisis.