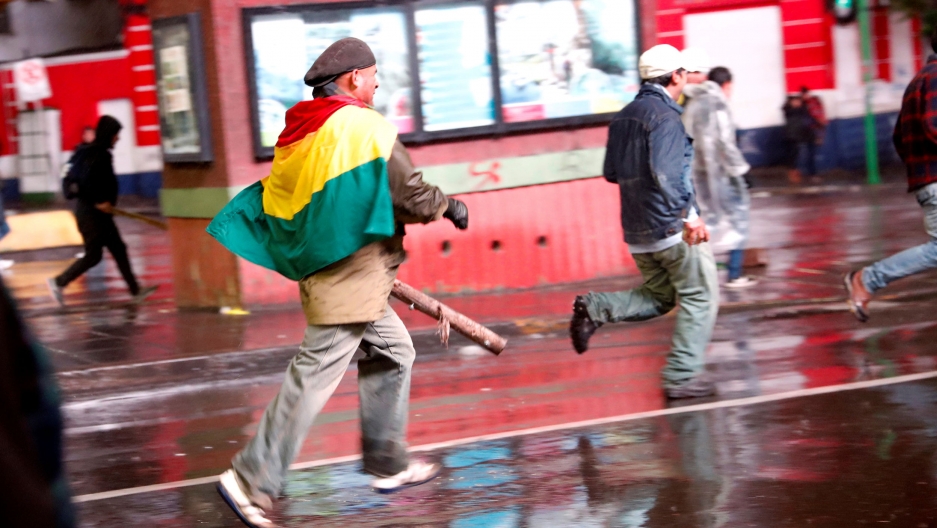 Demonstrators run on the street during a protest against Bolivia's President Evo Morales in La Paz, Bolivia, Nov. 10, 2019.

Evo Morales' resignation as president of Bolivia over the weekend has left a power vaccum in the South American country and has led to looting, fighting and roadblocks Monday.

The departure of Bolivia's first indigenous president, who was the last survivor of a wave of leftist leaders in Latin America from two decades ago, came on Sunday when the military abandoned him amid unrest over his disputed Oct. 20 re-election.

The Organization of American States (OAS) had denounced "clear manipulations" and urged a re-vote.

"I am afraid of what will happen, everything is a mess in the city. There are fights between neighbours," said Patricia Paredes, a 25-year-old secretary in capital La Paz. 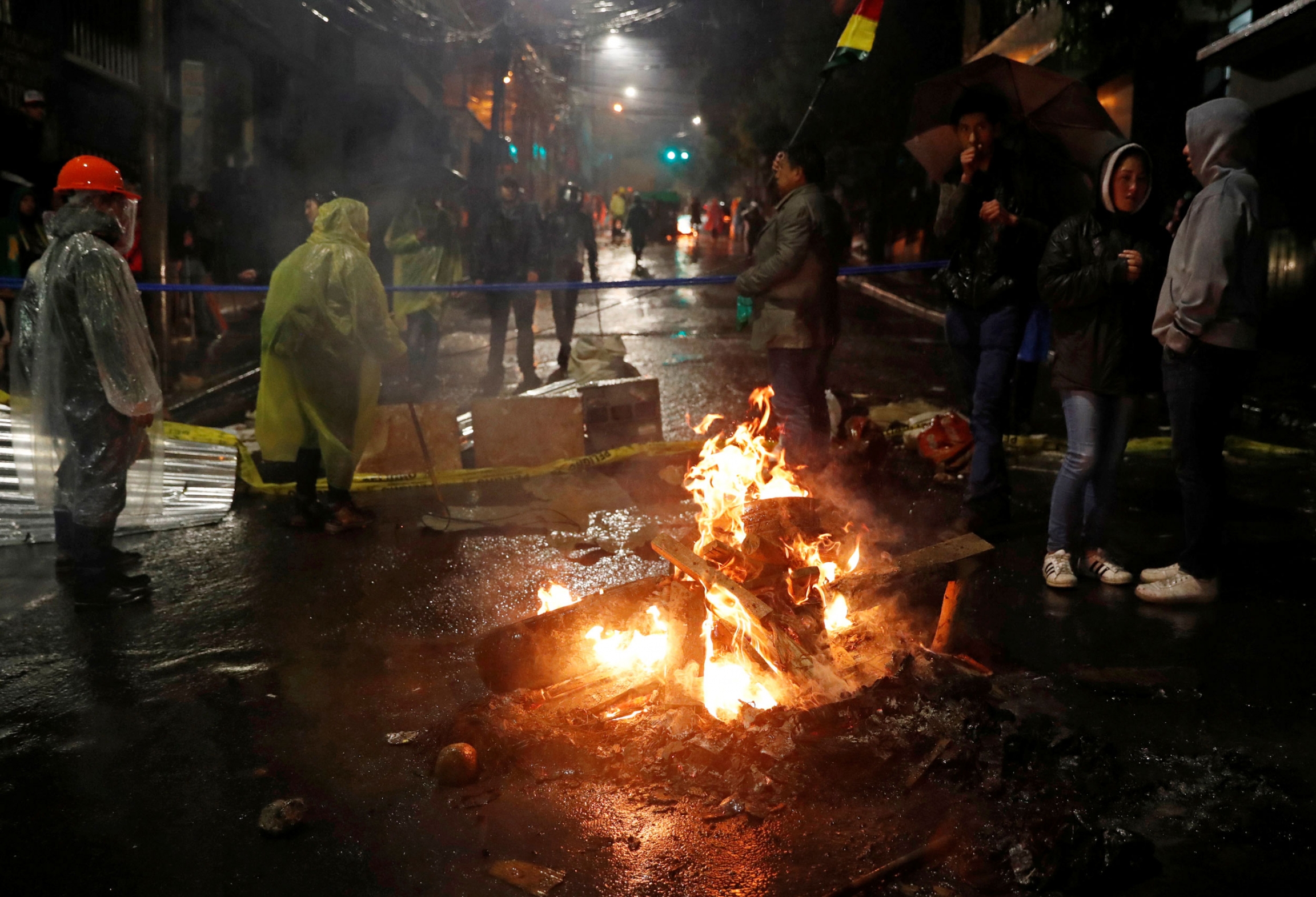 Demonstrators stand around a burning barricade during a protest against Bolivia's President Evo Morales in La Paz, Bolivia, Nov. 10, 2019.

Overnight, gangs roamed the highland capital and other cities, businesses were attacked, rival political supporters clashed and properties were set on fire.

Schools and shops were largely closed, while public transport halted and roads were blocked.

Morales, 60, flew out of La Paz and was believed to still be in Bolivia — but his exact whereabouts were unclear.

He said he stepped down to ease the violence, but repeated on Monday accusations he was the victim of a conspiracy by political enemies including election rival Carlos Mesa and protest leader Luis Fernando Camacho.

"The world and our Bolivian patriots repudiate the coup," he tweeted. "They moved me to tears. They never abandoned me. I will never abandon them."

Argentine President-elect Alberto Fernandez echoed Morales' denunciations of a coup, as did Mexico which has offered him asylum. "It's a coup because the army requested the resignation of the president, and that violates the constitutional order of that country," Mexican Foreign Minister Marcelo Ebrard said.

In a redrawing of Latin America's political landscape, the left has regained power in both Mexico and Argentina, though powerhouse Brazil still retains a right-wing government.

In Venezuela, opponents of leftist leader Nicolás Maduro, an ally of Morales, celebrated the fall of the Bolivian leader whom they call a "dictator," saying they hoped Maduro would be next.

Amid the chaos, prominent Bolivian opposition figure and academic Waldo Albarracin tweeted that his house had been set on fire by Morales supporters.

Another widely-shared video appeared to show people inside Morales' own property with graffiti daubed on the walls.

"People are trying to cause chaos," fretted Edgar Torrez, a 40-year-old business administrator in La Paz, saying politicians and criminals were all taking advantage of the situation. 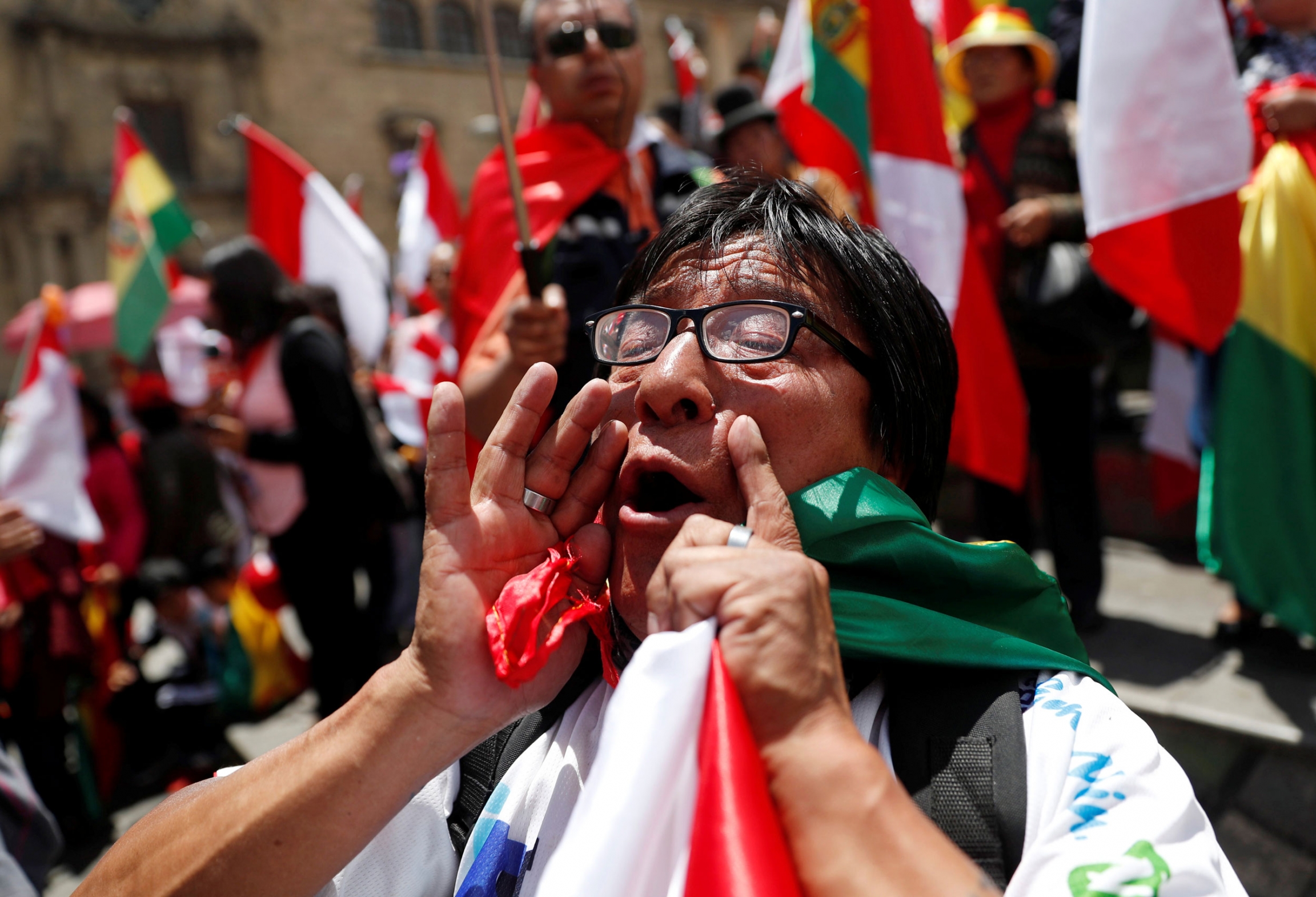 Morales' vice president and many of his political allies in government and parliament stepped down with him, and it was unclear who would take the helm pending a new election.

Under Bolivian law, the head of the Senate would normally take over provisionally. However, Senate President Adriana Salvatierra also stepped down on Sunday.

Legislators were expected to meet Monday to agree on an interim commission or legislator who would take temporary control, according to a constitutional lawyer.

Jeanine Añez, an opposition politician who is second vice-president of the Senate and constitutionally next in line to assume the presidency, said she was willing.

"If I have the support of those who carried out this movement for freedom and democracy, I will take on the challenge, only to do what's necessary to call transparent elections," Añez told television channel Red Uno.

Bolivia under Morales had one of the region's strongest economic growth rates and its poverty rate was cut in half, though his determination to cling to power and seek a fourth term alienated many allies, even among indigenous communities.