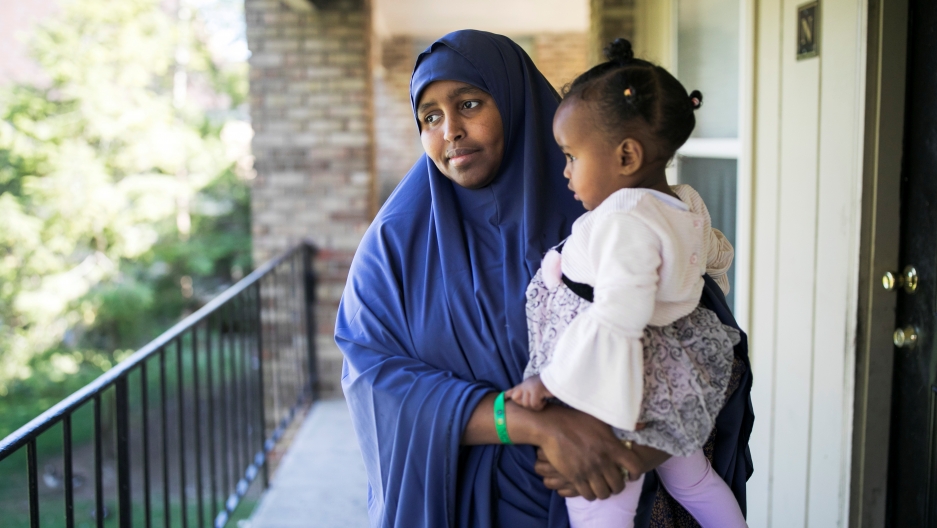 Ramlo Ali Noor, whose immediate family is affected by the Trump administration's cap on refugee numbers, poses at her apartment with her daughter Sumayo in Columbus, Ohio, on Sept. 27, 2019.

Update 1/13/2020:  On Jan. 10, 2020, Texas Gov. Greg Abott announced that his state will not accept refugees in 2020. Texas is the first state to opt out of the refugee program. In his announcement, Abbott said the state has accepted more refugees "than any other state" since 2010 and that it "has carried more than its share in assisting the refugee resettlement process."

Update 12/27: A least 35 state governors — a third of whom are Republicans — and 86 city or county executives have given their consent to continue receiving refugees under the terms of a presidential order. Conservative states such as Tennessee and Arizona have given their approval.

Meanwhile, the nation's nine refugee resettlement agencies are up against a Jan. 21 funding deadline to convince states and counties to affirmatively commit to resettling refugees. Three of the nine are suing the Trump administration over the executive order. They are Church World Service; The Hebrew Immigrant Aid Society (HIAS); and Lutheran Immigration and Refugee Service. A ruling on the lawsuit, filed in a federal court in Maryland, is expected in January. The complaint charges that the executive order violates federal law, which requires federal agencies to make decisions about where refugees are to be placed within the US.

"People wonder why not have local and state governments determine whether they want refugees to resettle in those areas? But I think there are number of problems there. One is just the logistics of administering a refugee resettlement program if you have patchy law and policy all over the country," said Elizabeth Foydel, the deputy policy director at the New York-based International Refugee Assistance Project, which supports the lawsuit against the executive order. "You also have issues of where people can go and where families can be reunited. Where refugees are resettled is not a random process."

When US President Donald Trump drastically slashed the number of refugees allowed into the US during fiscal year 2020, he also — for the first time ever — issued an executive order allowing states and cities to refuse to take them in.

Under the terms of the Sept. 26 order, the departments of State and Health and Human Services have 90 days to consider whether localities have given their “consent, in writing” for resettlement to continue. That means cities and states are scrambling to send letters to the White House affirming their consent by the Dec. 25 deadline — Christmas Day.

Now, refugee advocates around the US are lobbying their cities, counties and states to ensure they express support for refugees to continue being resettled there from camps and settlements around the world. Without affirmative consent, refugees may not be able to keep arriving.

Related: What's it like to become a US citizen after a lifetime of statelessness

“If they do nothing, from our understanding of the executive order, refugee resettlement to those localities could stop on Dec. 25.”

“If they do nothing, from our understanding of the executive order, refugee resettlement to those localities could stop on Dec. 25,” according to Elizabeth Foydel, deputy policy director of the International Refugee Assistance Project in New York.

Refugee advocates say the order could result in a major reworking of where refugees are resettled in the US. For example, refugees who would’ve been sent to places where they already have families may now be barred from joining with them if the city or state has decided not to accept any more refugees.

So far, no Republican governors have yet come forward to say they will block refugee resettlement, though several have previously expressed their support for the right of states to do so.

And the order could potentially set up battles between cities and states in places where a city wants to keep taking in refugees but a state does not — or vice versa. This veto power is unprecedented.

The order says it aims to enhance “state and local involvement in refugee resettlement.” But advocates say the State Department, resettlement agencies and local officials already talk to each other about where refugees are to be resettled.

“State and local governments are best positioned to know the resources and capacities they may or may not have available,” the order said, “which maximizes the likelihood refugees placed in the area will become self-sufficient and free from long-term dependence on public assistance.”

About 190 communities in the United States resettle refugees, though some states settle far more than others. California, Texas, Ohio and Washington took in the most during fiscal year 2017, with between 2,000 and 5,100 each, according to State Department data. In fiscal year 2020, the US has capped refugee admissions at 18,000, down from 30,000 the prior year — and a high of more than 110,000 in US President Barack Obama’s final year.

Before refugees arrive in the US, federal law dictates that representatives from the United States’ nine domestic resettlement agencies decide together where they will be placed based on criteria such as housing and employment availability, local resources such as language, and whether refugees from similar backgrounds already live there. The federal government has the final say on where they will go.

“It certainly treats refugees differently than those of us who might just move to a different state or town,” she said.

Several mayors and governors have come forward in recent days to affirmatively declare their support for receiving refugees. In Utah, Gov. Gary Herbert, a Republican, wrote Trump a letter asking the president to “allow us to accept more international refugees in Utah.” About 1,000 refugees are resettled to the state annually.

“Unfortunately, that number has dropped for the past two years and is on track to decrease more this year,” he wrote. “We know the need has not decreased and are eager to see the number of admittances rise again.”

“As the state that resettled the second highest number of refugees last year, we are honored to remain a place of safety and security for those fleeing persecution and violence,” he wrote in a statement on Nov. 5. “Refugees contribute to all sectors of our economy — as teachers, service members, doctors and more — while adding to our cultural landscape. They are an integral part of Washington’s past, present and future.”

Localities are expressing their support, too. In Alexandria, Virginia, the city council adopted a unanimous resolution on Oct. 22 expressing support for refugee resettlement.

It’s unclear what will happen in states such as Texas and Indiana, which have taken steps to stop refugee resettlement in the past.

Meanwhile, the State Department has not yet issued instructions on how localities should affirmatively state they want to take in refugees — or block their arrival.