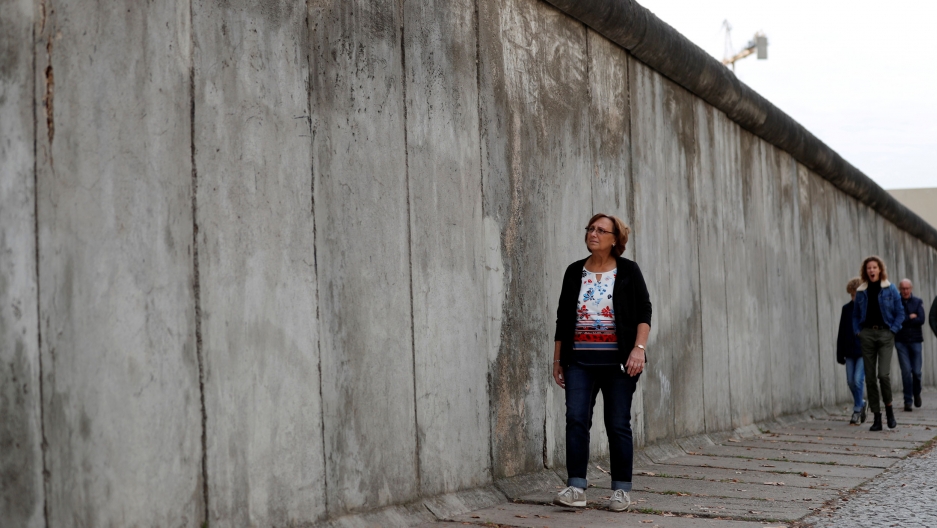 Angelika Bondick, a 63-year-old West Berlin sales assistant, walks along the Berlin Wall memorial on Bernauer Strasse in Berlin, Germany, on Oct. 22, 2019. On Nov. 9, Germany will mark the 30th anniversary of the fall of the Berlin Wall in 1989.

When Matthias Rudolph joined political protests in Leipzig in 1989, he wanted to change the Communist German Democratic Republic. Thirty years on, he enjoys the freedoms the fall of the Berlin Wall brought, but is not entirely happy either.

Like many Germans in the former East, Rudolph, 55, laments the way reunification unfolded — "there wasn't a new start" — and describes a divided society today that he believes drives some disaffected easterners toward political extremism.

"I didn't want to do away with the GDR but rather to reform it," said Rudolph, who was spied on by a colleague and detained for protesting as East Germany limped into its final months. "Personally, I wanted a different GDR, a more democratic GDR." 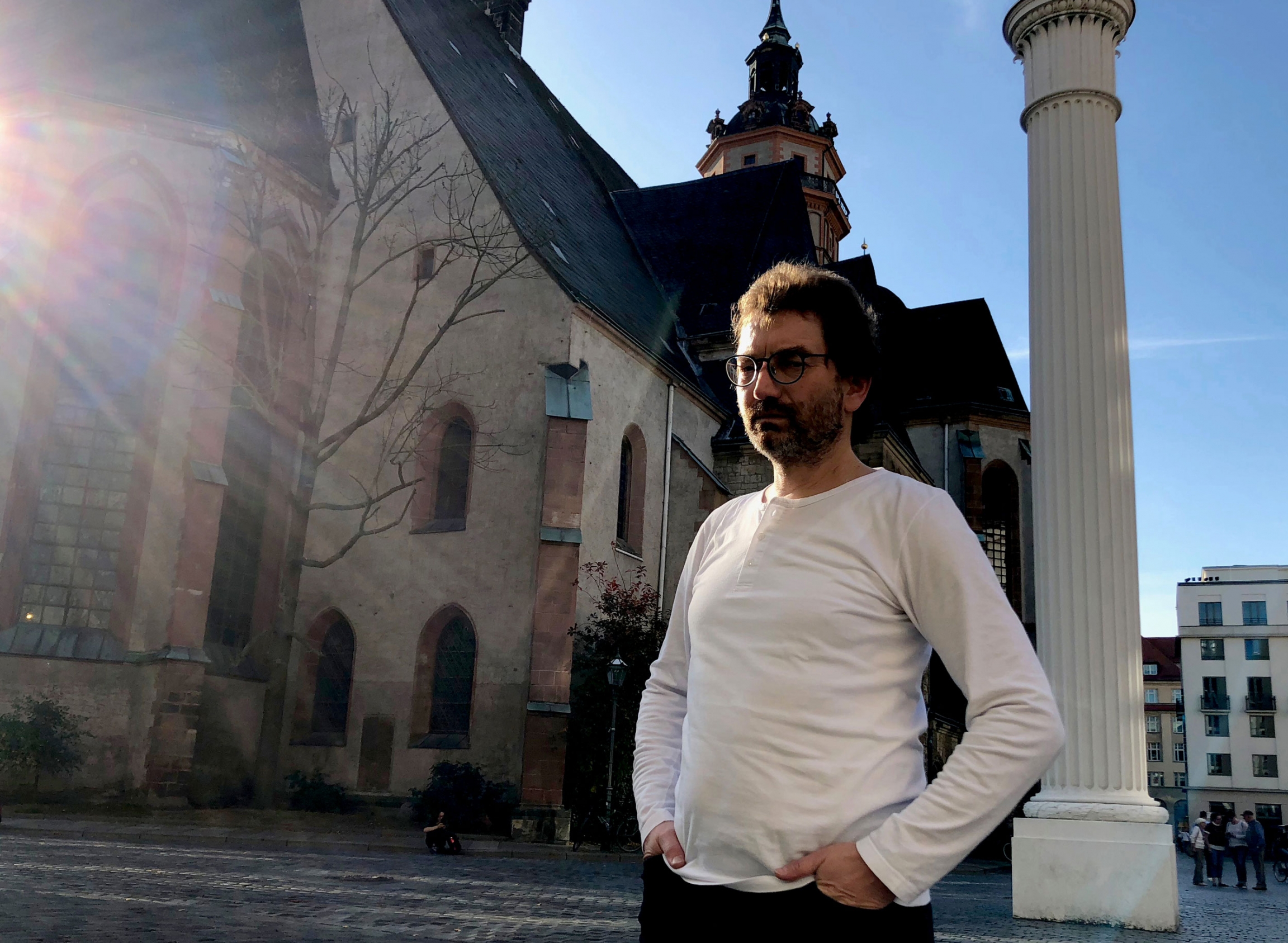 Matthias Rudolph poses in front of Nikolai Kirche during a Reuters interview in Leipzig, Germany, on Oct. 15, 2019.

The Leipzig protests are widely seen as the beginning of the end of the GDR. Yet, almost 30 years after the Berlin Wall fell on Nov. 9, 1989, a psychological divide remains between east and west: easterners still feel they came off second best.

"There was no reset," said Rudolph, who complained that reunification was a missed opportunity to remake Germany with a new constitution.

"I didn't want to do away with the GDR but rather to reform it. Personally, I wanted a different GDR, a more democratic GDR."

For West Berlin resident Angelika Bondick, 63, whose flat looks over the former Bernauer Strasse checkpoint, the fall of the Wall brought more tourists but no major upheaval. In GDR times, she regularly visited family in the East anyway.

If the dismantling of the Wall signaled the end of the Cold War, it also opened up new routes to walk her dog.

"It's nice that we can walk in whichever direction we want now," she told Reuters from her balcony.

Related: How the wall still divides one family

Late chancellor Helmut Kohl, the architect of reunification, promised east Germans "flourishing landscapes" in 1990 but the "Aufschwung Ost" — or eastern economic recovery — proved far slower and more painful than he had imagined.

Two million people, especially young people and women, have left the region since reunification in 1990 and few big global firms have moved in.

After cash injections of $2 trillion over three decades, the East's economic output per capita is still three-quarters of western German levels. Productivity is lower, and unemployment 2 percentage points higher than in the west.

A government report on the state of German unity last month cited a survey showing 57% of East Germans felt like second-class citizens. Only 38% in the East saw reunification as a success, including only 20% of people younger than 40.

Rudolph said he does not feel like a second class citizen.

"But it is also true that you always have to explain yourself. That's not nice either," he said. "I thought that would be over in a few years, but it wasn't."

Ilko-Sascha Kowalczuk, a historian and author of "The Takeover — how East Germany became part of the Federal Republic," said the economic shock of reunification disrupted the whole social fabric of eastern Germany.

"There was not a unification process on a level playing field but rather an alignment process ... what existed in the west was practiced in the east one-to-one," he said, adding that some easterners now felt they were not "full value citizens."

"Since 1990, many East Germans have been trying to be more German than the federal Germans ever were — and that results in an open nationalism and racism," Kowalczuk added.

Related: During the Cold War, buying people from East Germany was common practice

Easterners' sense of inferiority provides fertile ground for extreme parties. In the eastern state of Thuringia, which holds a regional election on Sunday, polls show a majority of voters support the far-right AfD and the far-left Linke.

In Thuringia and two other eastern states that held elections last month, the AfD has co-opted slogans that were used during the 1989 protests that led to the fall of the Berlin Wall, including "Wir sind das Volk!" ("We are the people!").

The AfD, which is far stronger in the east than the west, is urging voters: "The East rises — complete the change!"

Adopting the word wende, used to describe the fall of East German Communism, the AfD calls for "Wende 2.0" — effectively urging voters to do away with the established parties in a "drain the swamp"-style pitch.

Christian Hirte, the government's commissioner for the eastern states, says: "It is my firm conviction that the overwhelming majority of eastern Germans do not want anything to do with far-right crackpots who are violent."

But he acknowledges that xenophobia is an issue damaging to eastern Germany's attractiveness as a business location.

"We have to tell citizens clearly: it is in our own national and regional interests to be open," he said.

The message has not got through to everyone.

A report by the ZEW Institute earlier this year showed the probability of an asylum seeker becoming a victim of hate crime in East Germany is 10 times greater than in the west.

Images like last year's far-right riots in Chemnitz — the worst such clashes in Germany in decades — and this month's attack on a synagogue in Halle by a far-right extremist have reinforced the picture of a disenchanted and radicalized east.

In the latest episode of far-right intimidation, police said this week they were protecting the leader of Chancellor Angela Merkel's conservatives in Thuringia after he received a death threat that ended "Heil Hitler!"

That kind of language is anathema to Dagmar Simdorn, 81, who grew up during World War II and then lived in the GDR, just a few hundred yards from the Berlin Wall. She still notices differences between easterners and westerners.

"But I think young people are doing better," she said. "It's easier for them. They are growing up in this time of freedom. They don't know about East and West. That's why I believe it's so important to remind young people how things were then."