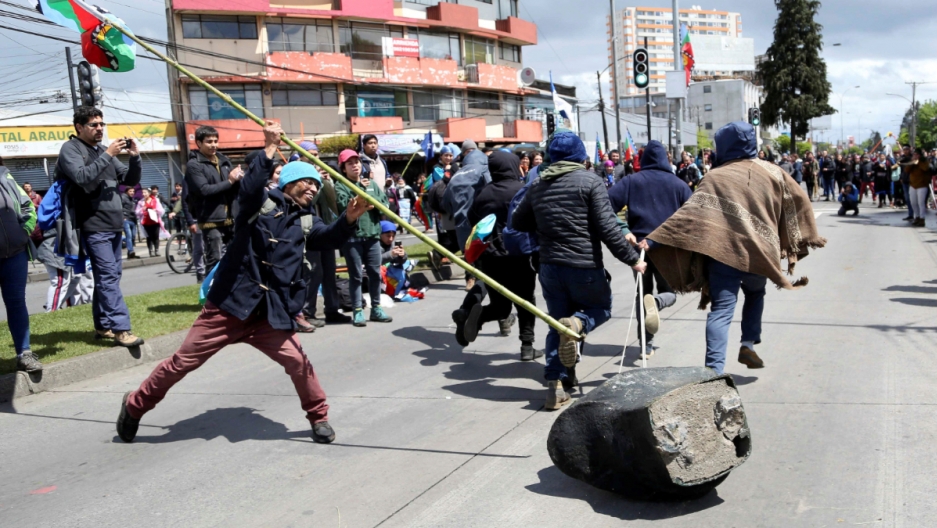 Indigenous Mapuche people pull the bust of Chilean Venezuelan diplomat Andres Bello behind them and another strikes the head with a flagpole during a protest against Chile's government in Temuco, Chile, on Oct. 29, 2019.

Chileans have been taking to the streets around the country to protest economic inequality and a democratic system set up after the dictatorship of Augusto Pinochet that many say is not responding to people's needs. 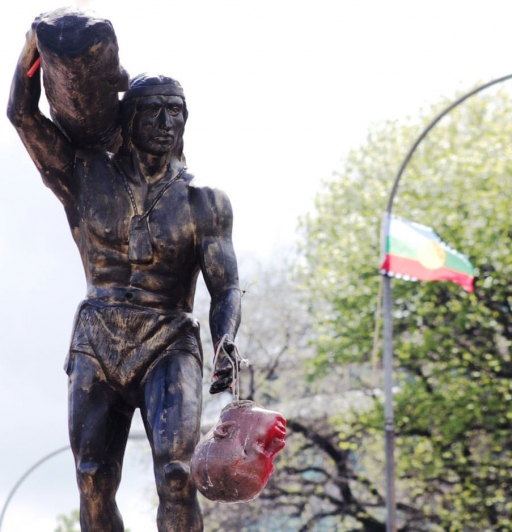 The head of the statue of Chilean aviator Dagoberto Godoy hangs from the arm of Mapuche warrior Caupolicán during recent protests in Temuco, Chile.

Indigenous Mapuche protesting in Temuco, a city 420 miles south of the capital of Santiago, last week tore down several statues of Spanish conquistadors and Chilean national heroes that dotted the city’s downtown area.

Related: PHOTOS: Chile's Piñera extends state of emergency, says 'we are at war'

During a day of demonstrations called by Mapuche Indigenous organizations, a large group of demonstrators wearing traditional Mapuche ponchos stood around the bust of Pedro de Valdivia, a Spaniard who led the colonization of Chile in the 1500s, cheering on hooded men who lassoed Valdivia’s bust and yanked it onto the ground.

Then, they stomped the statue and beat it with sticks.

Local press reported that conservative analysts called the destruction of the monuments an act of vandalism.

But Verónica Figueroa Huencho, a Mapuche scholar at the University of Chile in Santiago and Mapuche herself, does not see it this way.

“The symbolism of the destruction of these statues is important to us because they were put in ancestral territory and for many years we had to see the image of these conquerors, you know, outside of our homes, outside of our community,” Huencho said.

Natalia Caniguan, an anthropologist in Temuco, was following the protests on social media and headed to the city center to see the aftermath.

"Protesters took the head off the bust of Dagoberto Godoy, a Chilean aviator, and hung it on the bronze hand of Mapuche warrior Caupolicán,” Caniguan said, describing the most striking scene she witnessed on the streets.

Caupolicán, one of the leaders of the Mapuche rebellion against the Spanish conquistadors, was captured and killed by Spanish troops in 1558.

Mapuches, the largest Indigenous group in Chile, comprise 10% of the national population, but do not have any representatives in the Chilean Congress.

They have joined the demonstrations to protest economic inequality and also to put forward more particular political demands such as greater political autonomy and recognition of land rights.

“The Chilean state doesn't recognize our ways to represent our own authority. Our ancestral authority doesn't exist in the Chilean constitution,” Huencho said. “And I think that for that reason, in the middle of these protests in Chile, we tried to put in the political agenda our own demands.”

The protests, Chile’s worst unrest since the end of Augusto Pinochet's dictatorship, has already led to more than 7,000 arrests and injuries to 1,659 protesters and 800 police officers, according to authorities and rights groups.

Prosecutors are investigating more than 800 allegations of abuse, including torture, rape and beatings by security forces during the demonstrations, which have often degenerated into riots.

The unrest has grown less violent in recent days, but has shown few signs of subsiding.