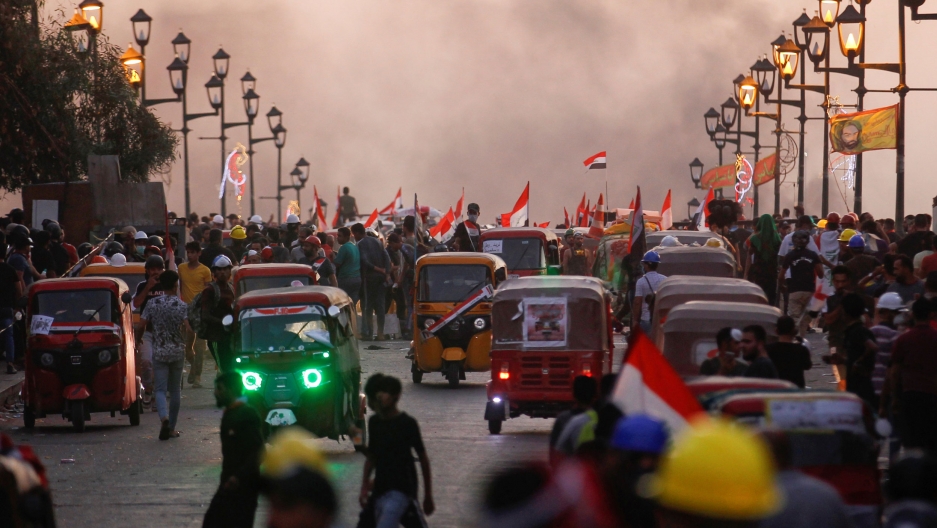 Demonstrators and tuk-tuk drivers are seen on a bridge during ongoing anti-government protests, in Baghdad, Iraq, on Nov. 4, 2019.

For a long time, Iraqi activist and historian Omar Mohammed felt isolated and marginalized in his own country.

“[I felt] depressed and upset, oppressed by the government. I didn't feel that this country represented me in any way,” Mohammed said.

Four years ago, his activism against the Iraqi establishment got him into trouble with the security forces.

“They [said] ‘if we see you, we will kill you,’” Mohammed recalled in an interview with The World.

So he left the country and went into hiding.

Related: A wave of anti-government protests in Iraq

Now, Mohammed has found new hope as thousands of protesters marched into the streets in Baghdad, Basra, Najaf, Karbala, and other Iraqi cities, calling for a change in the way their country is governed.

Protesters have stood up to the ruling elites — chanting, marching, dodging tear gas and live ammunition — together.

Watching the protests, Mohammed said he found himself energized, even proud of his fellow countrymen.

Mohammed said that what is happening in Iraq is nothing short of a revolution. “This is going to change the country, going to change Iraq for the next generations yet to come. This is a turning point in the Iraqi history,” he said.

The protesters are joined by, among others, the drivers of motorcycle rickshaws, or tuk-tuks. They have become the true heroes of this uprising.

When the anti-government protests started in October, ambulances had difficulties getting through the crowds to help the injured. So tuk-tuk drivers joined the protests to help navigate the dense traffic. Videos from Iraq show the nimble three-wheeled vehicles whizzing through the crowd, carrying injured protesters to hospitals, free of charge.

The tuk-tuk drivers have become such central characters of the protests in Iraq that there are now murals celebrating their acts of bravery. The protesters’ self-published newspaper is called “tuk-tuk.” And a popular Iraqi singer, Hussam al-Rassam, even dedicated a song to the tuk-tuk drivers.

“The tuk-tuk is definitely the symbol of the have-nots [in contrast to] the government officials and the upper-middle-class with their Toyota Land Cruisers and their SUVs and fancy cars,” said Hamzeh Hadad, an Iraqi political analyst in Baghdad, “There’s definitely a symbolism there."

Hadad said the drivers, who typically come from poorer areas, “went from nobodies to being somebodies.”

The majority of protesters on the streets are young Iraqis, born around the time of the US-led invasion in 2003. Oula Kadhum, Iraqi scholar at the University of Birmingham, United Kingdom, said young Iraqis want more from their leaders.

Iraqi youth have grown up in the shadows of foreign occupation, war and terrorism. They have only known power-hungry politicians concerned about their own interests, Kadhum added.

But these young protesters are also the generation that has been the most connected to the outside world. That’s why the old system that silenced their parents' generation can’t silence them, said Mohammed, the activist and historian.

Many of the protesters and their supporters are educated, but they are unemployed, he added.

“I have heard one of the protesters who is more than 25 years old. He says, ‘I still ask my mother to give me money to buy personal stuff.’ This is unacceptable,” Mohammed said.

In over two weeks of demonstrations, more than 250 Iraqis have died. Countless people have been injured. In response to the protests, Iraqi President Barham Saleh and Prime Minister Adel Abdul Mahdi have promised reforms.

But Oula Kadhum thinks their promises won’t be sufficient to send the protesters home.

“There is now a momentum,” she said. “The protests have increased. They have taken on a kinda do-or-die attitude.”

"The protests have increased. They have taken on a kinda do-or-die attitude.”

“This kind of … 'we will speak, we will talk, we need a dialogue, we will have experts coming to study your demands, etc.,' — it’s not working anymore,” he said.

The protesters have voiced their demands in creative ways, he added.

It is time now for Iraqi politicians to help reach a creative, meaningful solution.