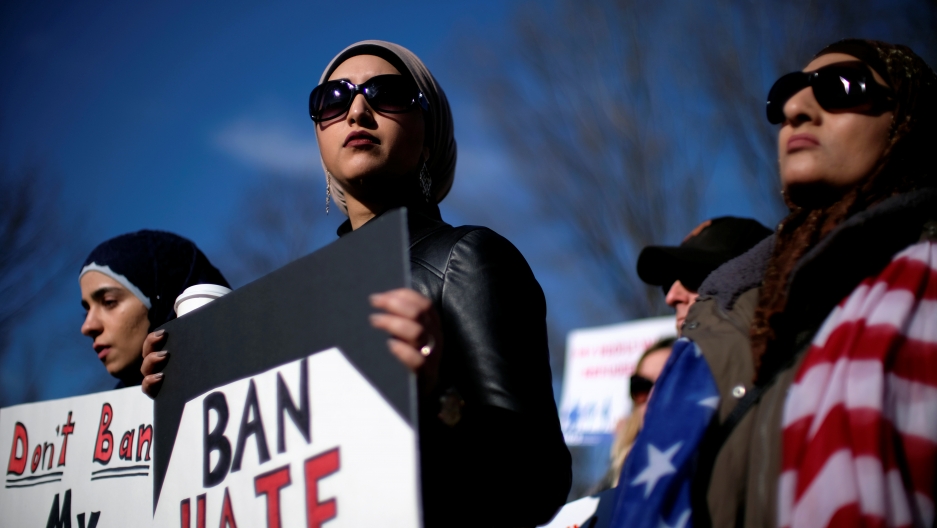 Activist groups including the Council on American-Islamic Relations, MoveOn.org, Oxfam, and the ACLU hold a rally in front of the White House to mark the anniversary of the first Trump administration travel and refugee ban in Washington, DC, Jan. 27, 2018.

“You don't win elections on the internet. You win them at the doors.”

“You don't win elections on the internet,” the 23-year-old said. “You win them at the doors.”

Khalid quit Facebook at one point during her campaign for a seat on the City Council of Lewiston, Maine, because she was getting so many hate-filled messages. Someone even posted her home address.

It was overwhelming for her, even though Khalid is used to challenges. She came to Lewiston with her family when she was 7, along with thousands of other refugees from Somalia who helped revive the dying mill town. Lewiston became a diverse spot in an overwhelmingly white state. It’s experienced some tension and racism, but Khalid said she grew up feeling welcomed.

“I am an example that Lewiston is such a progressive city,” she said, pointing out that the people who attacked her online are not the voters she met during the months of door knocking. “The negative comments and then, you know, the trolls were not from Lewiston. Some may be from Maine, but the majority were across the country from Mississippi to Alabama.”

Khalid won with nearly 70% of the vote and will be the youngest member of the Lewiston City Council, and its first Somali American. The Council on American-Islamic Relations said across the country, 34 Muslim American candidates won local elections out of more than 80 who ran. It’s part of a trend that began with last year’s election, with more diverse candidates choosing to run for office.

This week, a Somali American woman won a seat on the St. Louis Park, Minnesota, City Council. In Virginia, Ghazala Hashmi, an Indian American college administrator who came to the US as a child, was elected to the Virginia state senate from a district that’s been Republican for decades.

“It was sort of a test to see the ways in which the community might respond to a candidate such as myself,” Hashmi said, adding that her bid for office was in part a response to the rise in hate crimes across the country.

“I knew that we had to speak up and start representing ourselves, and we had to become visible,”

“I knew that we had to speak up and start representing ourselves, and we had to become visible,” she said.

She said she had her fair share of trolls and hateful messages. But Hashmi ended up helping turn her whole state blue, giving Democrats a majority in the state Legislature. Even though Hashmi said the demographics of her district haven’t changed in the past few years — it’s still majority white, minority African American.

“So, that has not changed,” Hashmi said. “But I believe perceptions have changed.”

Related: Muslim women chart their own path in #MeToo era

In other words, the constituents got to know her. Which might sound overly simple, but it’s what Abrar Omeish experienced, too. She’s the daughter of Libyan immigrants, who won a seat on the Fairfax County School Board in Virginia.

“Some people honestly couldn’t get past the hijab. You have people who ask, ‘Where are you from?’ Several people would say, “Well, are you an Islamic person?”” Omeish recalled. “It’s been weird to have humanizing myself be part of our strategy conversation as a campaign team. I’m trying to focus on policy, I’m trying to focus on voter outreach. And we have to have conversations about how do we make me more relatable, human, because there are so many misconceptions that come before that.”

But those are the conversations Muslim Americans have to have, said Salam al-Marayati, who’s president of the Muslim Public Affairs Council.

“I think this is a moment for American Muslims to declare their independence from whatever is happening in the Middle East, [to say] that we do not look to the Middle East as a reference for Islam, that we see within ourselves what Islam means, and therefore creating that independent American Muslim identity. We're at that cusp of defining who we are for our fellow Americans.”

“I think this is a moment for American Muslims to declare their independence from whatever is happening in the Middle East, [to say] that we do not look to the Middle East as a reference for Islam, that we see within ourselves what Islam means, and therefore creating that independent American Muslim identity,” he said. “We're at that cusp of defining who we are for our fellow Americans.”

But Imam Omar Suleiman, who was trolled and attacked after delivering a Muslim prayer in front of the Texas state Legislature, said this is just the beginning of the challenges these Muslim American elected officials will face.

“They’re going to want to be judged by the weight of their platform, by the virtue of their work, and not by the perceptions of their identity,” he said. “And I think it’s frustrating when they constantly have to operate as either somebody’s feel-good story or somebody’s villain.”

At least now, future candidates know that it’s possible to endure the hate and get a local community to ignore those who want to weigh in from across the country, said Safiya Khalid.

“My message for them is to continue, you know, knocking on doors and to not pay attention because you don't have time to worry about what someone across the country is saying about you. It’s a distraction,” she said. “It’s all about distraction and inciting fear in you.”

And if you give into it, Khalid said, you’re letting them win before the votes are even counted.