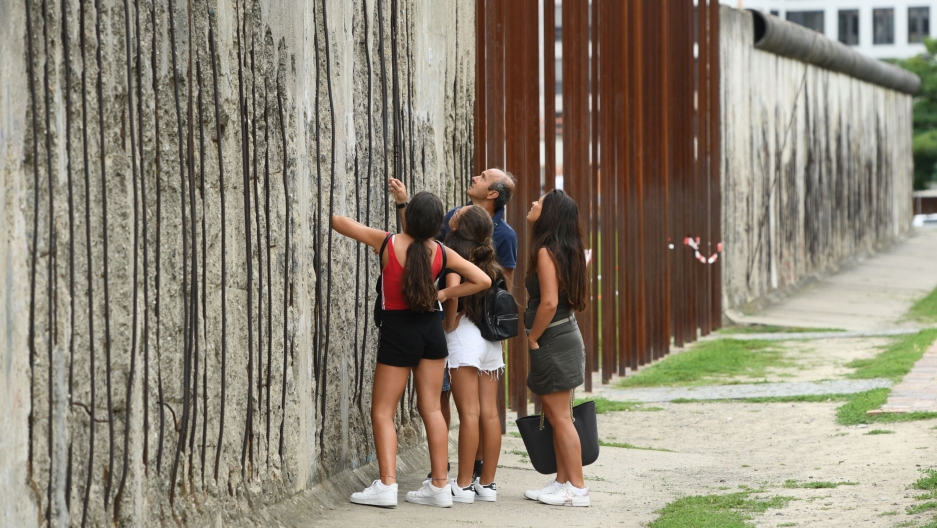 Tourists look at a piece of a wall that was a part of the former Berlin Wall fortifications, at the Berlin Wall memorial site in Bernauer Strasse in Berlin, Germany, on Aug. 12, 2019.

More than four decades after Carmen Rohrbach tried to swim her way out of then-Communist East Germany, she has no regrets, despite getting caught and being sent to prison.

Rohrbach, now 71, had always wanted to be an explorer. As a child, she learned to ride horses in the hope of one day touring Mongolia. Her dreams were crushed when she completed her biology degree in eastern Germany.

She applied for research assignments in Cuba, Mongolia and Siberia, but was rejected.

Escape seemed the best way to pursue her chosen path so she hatched a plan to paddle to Denmark.

Related: During the Cold War, buying people from East Germany was common practice

She and a friend set off from a campsite by the coast in northeastern Germany one night in 1974, but they ended up sinking their rubber dinghy to avoid detection by searchlights. They swam for a night and day.

"It's unbelievable — I still can't imagine being able to swim for that long," she told Reuters in an interview ahead of the 30th anniversary of the fall of the Berlin Wall on Nov. 9, 1989 that brought about German reunification.

During their second night at sea, the pair found a buoy and thought it would save them, but they were picked up by an East German warship in international waters.

Rohrbach was sentenced to 32 months' imprisonment for trying to flee. She was ultimately deported to the West sooner than that, without getting the chance to say goodbye to her family.

"I set out with the feeling that I had betrayed my country. But when I was in prison, I thought: 'No, it was worth risking my life due to this regime.'"

"I set out with the feeling that I had betrayed my country. But when I was in prison, I thought: 'No, it was worth risking my life due to this regime.'"

Since her release in 1976, Rohrbach has traveled widely doing research and writing books. She is glad she grew up in the Communist German Democratic Republic (GDR) before fleeing in her early 20s, as she better appreciates democracy and freedom.

Rohrbach was not the only person who tried to swim from the East. Another was Hubert Hohlbein, whose school teachers sometimes called him a "capitalist's son" as his parents were business people.

With the wind whipping up the water one November day in 1963, Hohlbein swam with a snorkel for around just under a mile from Potsdam in the East to Wannsee in West Berlin. It was a risky move: he knew others had been shot trying to flee in the area.

Related: How the wall still divides one family

But he made it to the West of the divided city, where he helped build a tunnel that enabled almost 60 others, including his mother, to escape.

Others were not so lucky. Thomas Drescher grew up in the East and knew he did not want to spend the rest of his life behind the Iron Curtain. Along with a friend, he cycled up to the Wall with a ladder and climbed.

Drescher, then 21, knew his game was up when a bright light shone on him. A border guard pointed a machine gun.

"He had a shepherd dog with him who kept us in check and then he said — and I still remember exactly how — 'What the fuck is this?' And we said: 'We don't want to do any shit, we just want to be free,'" Drescher said.

He spent nine months in jail and was released 16 days before the fall of the Berlin Wall. He does not regret his decision. Now the youth worker talks to school and church groups about his experience.